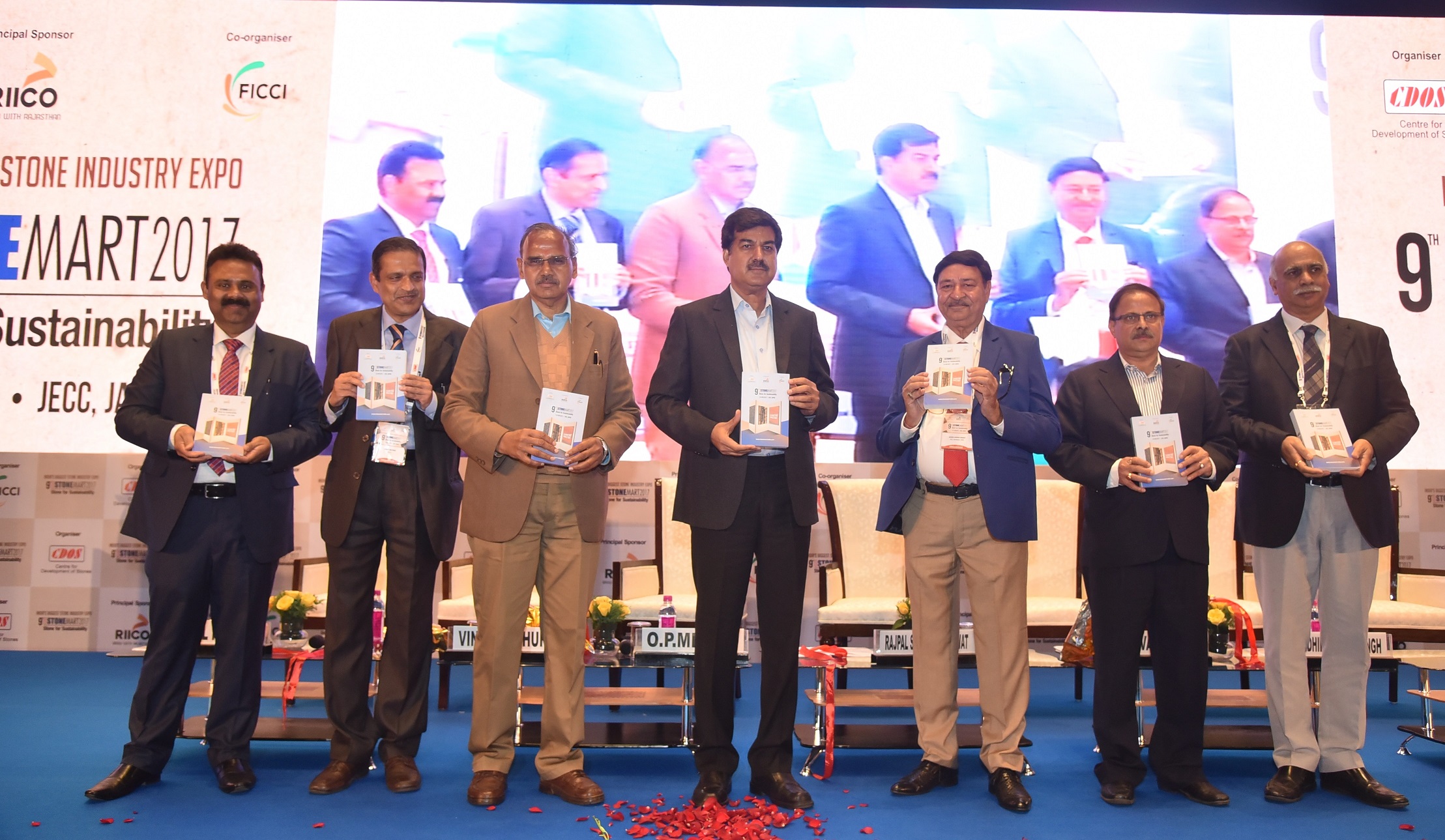 Jaipur, 2 February: Sustainability in the stone sector can be achieved through technological advancements, value addition and judicious excavation, said Rajasthan Industries Minister, Mr. Rajpal Singh Shekhawat at the Inaugural Session of the ‘ India Stone Mart 2017’ at JECC in Jaipur today. He was the Chief Guest on the occasion.

The 9th edition of the ‘India Stone Mart’ is being organised by Centre for Development of Stones (CDOS) with Federation of Indian Chambers of Commerce and Industry (FICCI) as co-organiser. Rajasthan State Industrial Development & Investment Corporation Ltd. (RIICO) is the Principal Sponsor of the event.

The Minister further added that the need of the hour was to increase the value of exports as well as value addition. This was possible with the use of latest technology in mining, processing and stone crafts.  Furthermore, the adoption of technical upgradation will not only help in resource mapping but as well as in reduction of mining and processing waste. He said the theme of the Stone Mart this year ‘Stone for Sustainability’ was most apt and the location of Jaipur was also most fitting given the number of famous monuments it has.

Mr. Shekhawat urged the trade of the stone sector that GST will play a positive role in promotion of industry in the country. There was no need to fear the implementation of the proposed tax system.

The stone sector in India, the Minister said, was robust with 30% in total world production of 166 million tons of raw stone. It was also the 4th largest exporter of stones with around 9.2% share. Furthermore, it was largest producer of marble, sandstone and serpentine (green marble) in the world. The Indian stone sector, he said, is growing at a steady rate of 15% per annum and has a huge employment potential with direct and indirect employment of over 50 lacs. Similarly, Rajasthan too accounts for 90% of marble, kotastone, and sandstone production in India besides prominent position in slate and granite.

Earlier, the Chief Secretary, Government of Rajasthan, Mr. OP Meena said that the Union Budget will spur economic growth especially in the housing sector. In this context, the stone sector can expect a big boost. He further said that environmental issues as a result of mining activities need to be addressed by adopting newer technologies and working on gainful waste utilization to make it a zero waste industry.  Stone industry employs large number of workers and a majority of them are in the unorganized sector. There is a need to address issues of health hazard and safety of workers for which proper medical cover and regular health check-up should be provided, he said.

The Vice Chairman of CDOS, Mr. Ashok Dhoot in his welcome address urged the State Government to take up their plea for keeping the industry in the 5% slab of the proposed GST. He said amidst applause that this edition of Stone Mart the best and the biggest ever with as many as 250 foreign buyers who have registered online. The architects have a huge role to play in the promotion of the stone industry. In this context, the Jaipur Architecture Festival was being organized to provide a platform to the architects pan India.

On the occasion the Minister also gave away ‘All India Stone Architectural Awards’ in different categories and released the Exhibitors’ Directory of the mart.

The 8th edition of the ‘All India Stone Architecture Awards’ was also held during the inauguration of the India Stone Mart today. The awards were given away by the Industries Minister, Government of Rajasthan, Mr. Rajpal Singh Shekhawat. The winner-architects received a cash prize of Rs. 1.00 lac each in four categories. Under the category ‘Exterior Facings’ – Girish Dariyav Karnawat for the project “Toda Mangra House in Rajsamand”; for ‘Interior Design’ – Changan Suravarapu and Kavita Khatry for the project “Corporate Office for VRV Cryogenics in Chitoor; Green Architecture – Sanjay M. Patil for the project “Farm House at Mahiravani in Nashik”; A ‘Special Jury Award’ was given to Hemen C. Sanghvi for the project “Kalaraksha Artisan School in Kutch”.