SUFISM THROUGH THE EYES OF ART, HISTORY AND POETRY

HomePress ReleaseSUFISM THROUGH THE EYES OF ART, HISTORY AND POETRY 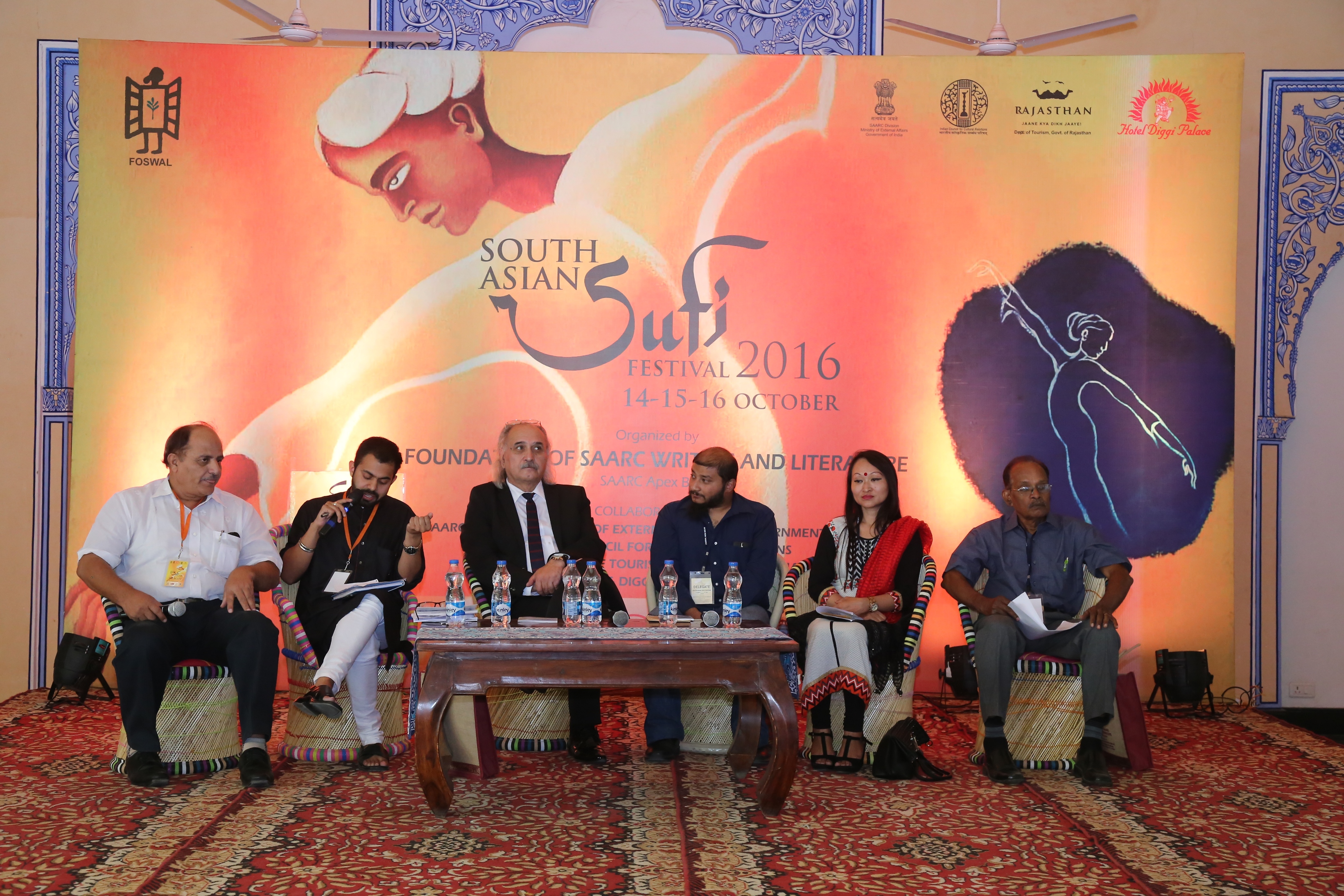 SUFISM THROUGH THE EYES OF ART, HISTORY AND POETRY

Jaipur, 16 October: The concluding day of the 3 day South Asian Jaipur Sufi Festival being held at Diggi Palace witnessed a series of interesting panel discussions today. Focussing on those aspects of Sufism which are usually overlooked, the sessions were centered on topics like ‘Sufism through the eyes of Art & History’; ‘Poetry inSufism’ and ‘The Role of Theater in Sufism’, among others.

The session, ‘Sufism through the eyes of Art & History’ moderated by Professor Chinmay Mehta, saw the participation of Justice R.S. Chauhan, Contemporary Indian Artist, Ms. Arpana Caur and Ms. Kuengo Wangmo. Justice Chauhan said that all artists are Sufis as they possess a kind of sensibility and sensitivity which makes ordinary objects seem extraordinary and divine. He gave a presentation on ‘MughalArt and Sufism’ in which he narrated instances of Mughal emperors like Babur, Akbar, Jahangir and Aurangzeb. Justice Chauhan also threw light on the fight between Dara Shikoh and Aurangzeb as a conflict between liberalism and orthodoxy. He further said that Dara Shikoh was a proponent of Sufism and he also wrote a book giving a comparison between Sufism and Hindu philosophy. In fact, Dara Shikoh’s death led to the decline of Sufism and paved way for Islamic Fundamentalism under Aurangzeb.

Ms. Arpana Caur said that contemporary artists always take inspiration from traditional art forms. She also talked about the latest book on her ‘Jiska Man Rangrez’ written by Dev Prakash Choudhary. She said that the book has imbibed the basic elements of Sufism like love and compassion which she also uses extensively in her paintings.

In the session, ‘Poetry in Sufism’ moderated by Professor Raza Khan and Professor Bhavya Soni, the participants were Partaw Naderi, Utsav Khatiwara, Somasuntharampillai Patmanthan and Kumari Lama. Mr. Naderi said that Sufism is based on those verses of Quran which are associated with humanity. Sufism aids in cleansing of the heart and soul.

Poet from Nepal, Kumari Lama said that at the heart of Sufism lies devotion. Nepalipoetry has always been devoted to God, the heroic tasks of the soldier and the nation, among other things. She also shared how after widespread destruction after the earthquake in Nepal last year, poems were written about suffering, pain and humanity. She also recited a self composed Nepali poem ‘Ghar’ which was based on the story of a disabled woman whose house was destroyed during the earthquake. The poem, apart from spreading the message of humanity, was also a political satire.

The interconnection between poetry and Sufism as well as the importance of poetryin spreading the message of Sufism were also dwelled upon. In spite of the difference in language, all Sufi poems spread the same language.

Mr. Patmanthan also recited a poem based on the situations in war struck Sri Lanka where a family has to leave their house to reside in a temporary shelter. He also said that poetry appeals to the basic instincts of humanity, forgiveness and love.

In the session ‘Role of Theatre in Sufism’, Theatre performer and Director, Ms. Sohaila Kapur and Writer of play ‘Sohbat’, Ms. Neena Wagh spoke about their play ‘Sohbat’ which depicted the life altering encounter between Rumi and his mentor Shams. They explained how the play highlights Sufi philosophy and teachings of Rumi. Talking about theatre, they said any form of art is a reflection of what one learns and experiences in life.

An experimental workshop to explore the hidden treasures of love and harmony in relationships through Sufi teachings, ‘Immersion Retreat for Couples’, also took place during the day. There was also an interactive discussion on travel and music by ‘Crazyfeet Kavya’ from Instagrammers Jaipur and a workshop on storytelling by Jaipur Book Lovers.

In the evening there will be musical performances by Shabnam Virmani and Vipul Rikhi of ‘The Kabir Project’ and Sonam Kalra and The Sufi Gospel Project.