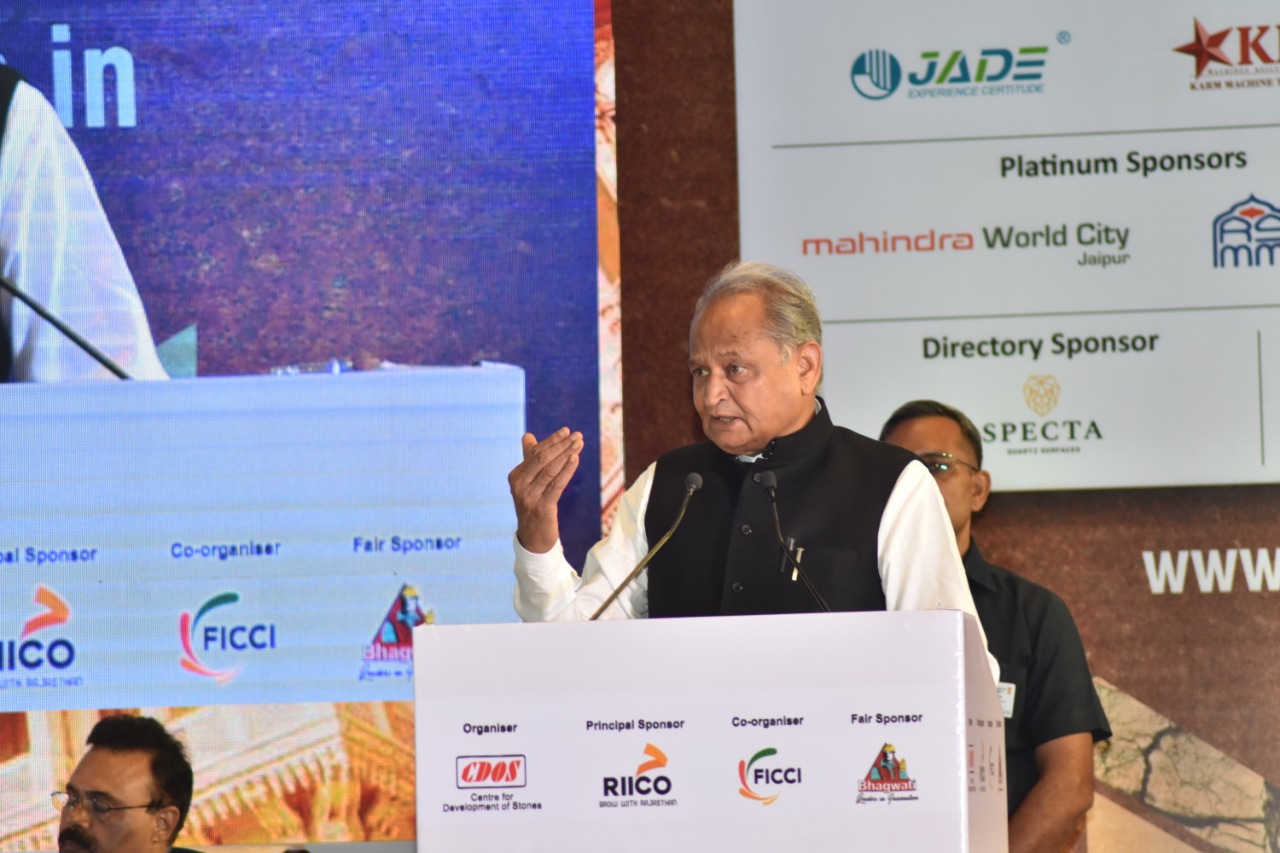 Chief Minister Shri Ashok Gehlot inaugurated the 11th edition of India StoneMart-2022 on Thursday. He said that there was a long history of Rajasthan in stone business. Dimensional stone is a major mineral of Rajasthan. Stones of the state have got a special identity in India and abroad. The state government is continuously taking such decisions by which the mining and industry sector is being promoted besides employment and revenue is also increasing.

Shri Gehlot was addressing the inaugural function of India StoneMart-2022 in Sitapura on Thursday. He said that a good atmosphere of investment has been created in the state with the Invest Rajasthan Summit. Various companies are setting up new units in the state. The state government is making efforts to remove the problems being faced in mining. He said that necessary facilities, a suitable environment, strong law and order etc are attracting investors to Rajasthan.

Shri Gehlot said that the state government is very serious towards the problems of illegal mining and efforts are being made to put a complete ban by continuously running a campaign. The Chief Minister said that the mining department and the environment department together should develop such a system through which problems in the mining works are resolved immediately and new proposals also get timely approval.

The Chief Minister said that an ideal investment environment is created in the state with Invest Rajasthan Summit. MoU of approximately Rs 800 crore associated with the stone sector was signed at this summit. With the mineral deposits in the state, the possibilities of investment have increased to a great extent due to infrastructure, skilled human resources and with the implementation of effective policies. Our government has prepared an environment for employment and economic development by implementing RIPS-2019 and recently launched RIPS-2022.

Our government to promote small industries has implemented ‘Mukhyamantri Laghu Udyog Protsahan Yojana’. For MSME industries, entrepreneurs can start a business in the state by filing a self-declaration, which will be free from any kind of inspection for up to 5 years. The land allotment process for industries has been made easy. After the MSME Act, 15,000 MSME units till now have been registered, out of which 6000 units have been set up.

Industrial Area at the block level

Shri Gehlot said that RIICO is setting up an industrial area at the block level, due to which employment opportunities are available at the local level. ‘Ease of Doing Business’ has improved due to the effective industrial policies of the state government. He said that the Rajasthan Industrial Security Force has been formed on the lines of CISF. He said that the state government is working continuously to promote tourism and has given industry status to tourism.

Shri Gehlot said that the state government is serious about the silicosis disease and has taken many responsive steps in the last few years to prevent it. He said that it is the social responsibility of the mining and stone industries to prevent this disease. Calling upon such industries, he said that they should provide necessary facilities for the safety and health of personnel.

The Chief Minister on this occasion felicitated Shri Ashok Patni of RK Group, Shri R Veermani of Gem Group and Shri Arun Kumar Agarwal of Rajasthan Industry with the C-DOS Lifetime Achievement Award for their valuable contribution in the development of the stone industry. All India Stone Architecture Awards were also given away.

The Chief Minister on this occasion also released the Exhibitors Directory of StoneMart-2022 and RIICO’s Coffee Table Book. Besides this, Shri Gehlot inaugurated the international exhibition and Shilpgram, visited various stalls.

Industries Minister Smt Shakuntla Rawat said that Rajasthan was earlier known only for marble and sandstone. The granite industry has developed fast in the last 10 years, a large number of granite mining and processing units were set up in Jalore, Kishangarh, Chittorgarh, Rajsamand and Udaipur and other areas. Granites of various colours and varieties are becoming famous. The Centre for Development of Stones has been set up through RIICO to give pace to this industry. Since then, this centre is providing a platform to stone entrepreneurs for various international business agreements.

StoneMart has a place in selected exhibitions of the world

Chief Secretary Smt Usha Sharma said that the framework of India StoneMart was made during the first tenure of Shri Ashok Gehlot in 2000. Its objective was to establish India’s stone industry prominently on the world map. It was successfully organised for the first time that year. In the last 22 years, the size and presentation of this exhibition have become so big and the participation of representatives from the business world has increased a lot. This world-level exhibition has got a place in the selected exhibitions of the world, which is a matter of pride.

More than 10 lakh getting employment

RIICO Chairman Shri Kuldeep Ranka said that Rajasthan has 70% contribution to the stone production of the country. Dimensional stones are a major mineral of Rajasthan. There are huge reserves of marble, sandstone, granite, Kota stone, slate etc. The stone industry adopting scientific exploitation and processing in the last few years has carved its niche. The state has 4,920 mining leases. 90% of the country’s marble and sandstone is produced in Rajasthan. More than 10 lakh people in the state are getting employment from this.