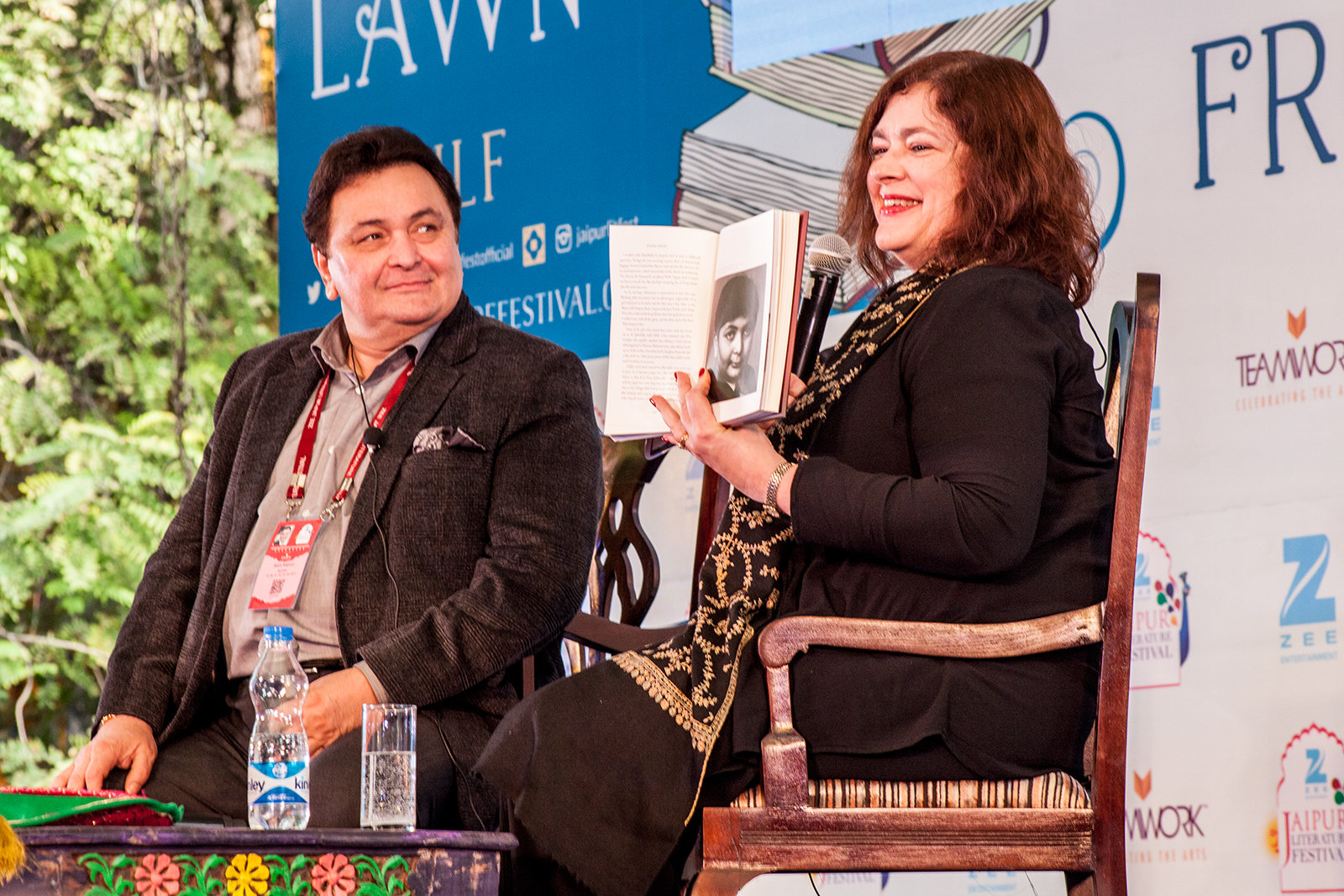 Jaipur 20 January, 2017 A busy day of inspiring sessions in the sunshine started with the rousing music of SwanandKirkire and AnkurTewari which elicited cheers from the crowds on the Front Lawn.

The morning began with poetry again in sessions which saw Gulzar, Pavan and Anne Waldman in action wowing the crowds. The Beats are famous for breaking as many writing conventions as social conventions.Waldman traced Ginsberg’s poetic lineage to the Bardic roots of transcendental poets like Whitman and Blake, and their tradition of visionary Songs. Waldman is famous for her embodied style of performance poetry, but said she views herself equally as a performance poet and a page poet. She revealed that her poetry draws deeply on ‘ideas of Indian ritual, oral and verbal explorations, spritual ceremonies, invocations, themes of life and death,’ adding that as a young poet, Ginsberg had encouraged her to use her ‘vibrato voice’.

The jam-packed crowd gathered early for Indian-American novelist Chitra Banerjee Divakaruni’s session which was testament to the allure of her words. A luminous smile, gracious acknowledgement of every question, passion and compassion exuding from her responses all set the stage for the lively discussion that followed.

‘For me, writing was a very personal action against forgetting,’ said Divakaruni. Confessing that she did not begin writing until she became an immigrant, she added, ‘Immigration pushed me out of my comfort zone. It forced me to look at things newly.’ The fear that she was losing touch with her culture prompted her to explore it in myriad ways. In Mistress of Spices, it was the culinary heritage that she dipped her toes into. ‘Memories, traditions, history: these are all found in food,’ she said. ‘It is a living cultural thing we change as we go along.’

In a candid session at Cox & Kings Charbagh,EkaKurniawanspoke to British translator DeborahSmith about his craft, his influences and the importance of ghosts in his work.

The session began with Kurniawan reading the stunning first chapter of Man Tiger, upon Smith’s request,which led into a discussion about the wide variety of influences that can be traced in his work. The author grew up in a small coastal Indonesian town that had no bookstores. ‘I just read what came into my hands, and when I wanted to become a writer, I just put all these influences into my books,’ he explained, listing influences as diverse as as Knut Hamsun’s Hunger, Tolstoy, Dostoyevsky, as well as Indian epics like The Mahabharata and TheRamayana.

Diamonds are forever, but the Kohinoor is timeless: a stone that has reached mythic status in folklore, crossing over from the merely expensive to the invaluable. Since 1751, when the first ‘solid reference to its existence’ was recorded, the Kohinoor has borne witness to many vital moments in Indian history. William Dalrymple and Anita Anand took the audience at the Cox & Kings Charbagh on an enchanting and effortless lesson in history, as they plotted the journey of this priceless stone over centuries.

While waiting for Rishi Kapoor to arrive, one could overhear conversations in a plethora of languages including Bengali, Punjabi, English and Hindi at ZEE JLF’s Front Lawn. This is testament to the popularity of the veteran actor, whose fan base expands across India. As expected, Kapoor walked onto the stage to loud cheers from the star-struck audience.

The session opened with the official unveiling of Kapoor’s autobiography KhullamKhulla, co-written by MeenaIyer. Film historian Rachel Dwyer posed questions to Kapoor about his long, illustrious run at the movies, and the rationale behind penning his personal story.

Kapoor views the writing of his autobiography as a significant step, since it documents the story of his struggle. He may have been a ‘star-son,’ but at the end of it, ‘you are as good as your last film.’At the age of 64, RishiKapoor is still going strong.The fact that he is still a name to reckon with, at a time when his son is one of the leading men in the industry, is proof of the wealth of his talent and his determination.

India needs a new model of community libraries that encourage people to think for themselves, according to novelist and community activist Mridula Koshy.

Speaking at the ZEE Jaipur Literature Festival in Aspire: The Freedom to Dream at Samvad, Koshy described her own experience setting up the Deepalaya Community Library in Delhi in 2010. ‘We were trying to create an example of what a library should look like’, she said.

‘We need to say out loud that most people in India are denied access to reading. Children may learn to read, but only in a very functional way, for the purposes of the state and the economy. Very little is done to encourage independent thinking or reading for pleasure’, she said.

Despite India’s long and varied association with mythological story-telling, it was a surprise when Baahubali, a 2015 South Indian historical epic, became the highest-grossing film in the history of Indian cinema. In a session that saw some of the largest crowds on Day 2 at the ZEE Jaipur Literature Festival, the minds and cast behind this blockbuster took the first step in creating an extended Baahubali universe, with the launch of the cover of its prequel novel, The Rise of Sivagami, written by the author of Asura and Ajaya, Anand Neelakantan.

The loudest cheers from the audience were directed at the star, Rana Daggubati, who plays Bhallala Deva. When asked about the impact that starring in Baahubali has had on him, Duggabatisaid ithad reinvigorated his love for his craft. ‘After seven years of doing only commercial movies, I had forgotten why I had wanted to become an actor,’ he explained, ‘Baahubali reminded me why.’

The afternoon continued with another Man Booker Prize winner Alan Hollinghurst talking about his life and work on the Front Lawns of Hotel Diggi Palace. Tamil ‘s classical language and rich literary heritage was the focus of The Tamil Story with Imayam, Kannan Sundaram, PerumalMurugan and SubhashreeKrishnaswamy in conversation with Sudha Sadhanand. In The Unravelling of High Hopes and Missed Opportunities in Iraqthe audience listened as Emma Sky described her experience of signing up as a volunteer in Iraq and how months became a decade, sharing her experiences in conversation with Hardeep Singh Puri and Jonathan Shainin.

Gambits and Game Changers: Relooking the Indian Economy saw leading economists and journalists take a look at whether India needs crisis and shock tactics in order to change with demonetisation, anti-graft and reform agendas all aiming to transition from a low to middle-income economy.

In the final session of the day in Cox & Kings Charbagh saw DattatreyaHosabale and Manmohan Vaidya in conversation with Pragya Tiwari in Of Saffon and the Sangha. In response to a question from the floor the speakers made it clear that the RSS does not condone violence of any kind, especially not on a particular community. They also expressed their belief that Western education has been teaching us that our ancestors are fools and the invasion of India has been proved not entirely true.

Vani Prakashan and Teamwork Arts Pvt Ltd presented the Vani Foundation Distinguished Translator Award. The award honors those translators of India who have consistently and qualitatively facilitated literary and linguistic exchange between at least two Indian languages. The 2017 award is being presented to the well-known translator, poet, writer and critic Dr Anamika.

Tonight Hotel Clarks Amer is expecting crowds of music fans to enjoy the award winning Bombay Bassment with their sounds of hip-hop, reggae, funk and drum & bass, and Inna Modja who is set to transport everyone to the heart of Mali with her rich and magical sound.

This evening is also the first of two Heritage Evenings presented in partnership with Rajasthan Tourism. Bringing together arts and culture with built heritage, this evening’s mesmerising Heritage Evening at the magnificent Amber Fort. Rhythm and Rhyme will be an evening of poetry readings by celebrated American poet Anne Waldman and the renowned Bollywood lyricist SwanandKirkire. This will be followed by Sarod Recital by Padma Vibhushan UstadAmjad Ali Khan.

Writers and Festival Directors NamitaGokhale and William Dalrymple invite authors from across the globe to take part in the five-day programme set against the backdrop of Rajasthan’s stunning cultural heritage and the Diggi Palace in the state capital Jaipur.