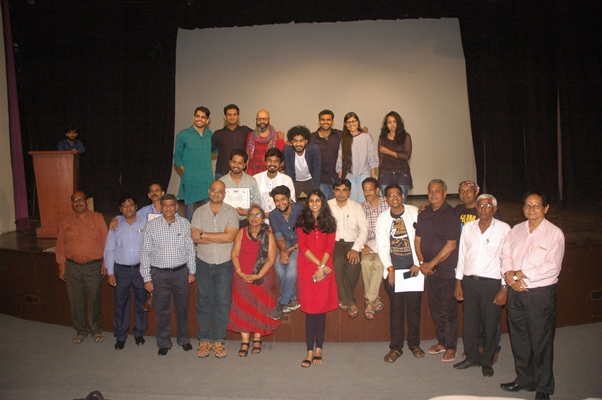 The 20-day course on Screenplay Writing, being held in collaboration with the Film and Television Institute of India (FTII), at the Jawahar Kala Kendra concluded on Tuesday with a valedictory ceremony. The ceremony began with the summation of the course and information about other courses at the FTII by Dean, Television, FTII, Mr. Rajendra Pathak.

The Course Facilitators, FTII, Ms. Arunaraje Patil and Mr. Soumil Shukla also addressed the gathering. Ms. Patil expressed that there was huge diversity seen in the course in terms of age, thinking and background. The participants showed swift learning and grasped the nuances of storytelling and script writing quickly. Mr. Shukla added that both the facilitators as well as the students gained immensely from the course.

There was also a screening of a 4 minute film capturing the experiences of the 21 participants who went to different locations for field visit. Entertaining skits were also performed by the students. The ceremony concluded with presentation of certificates to the participants.

It is to be recalled that over the period of 20 days the participants of age group 18 years and above, from various states including Uttarakhand, Andhra Pradesh, Delhi, Maharashtra, Gujarat and Rajasthan, had learned the basics of screenplay writing. A number of movies were screened as part of the curriculum for understanding of scripting. They were also given the assignments of writing the script of their own short film along with a detailed character sketch of one of the characters from their film with implication of the knowledge attained during the course.