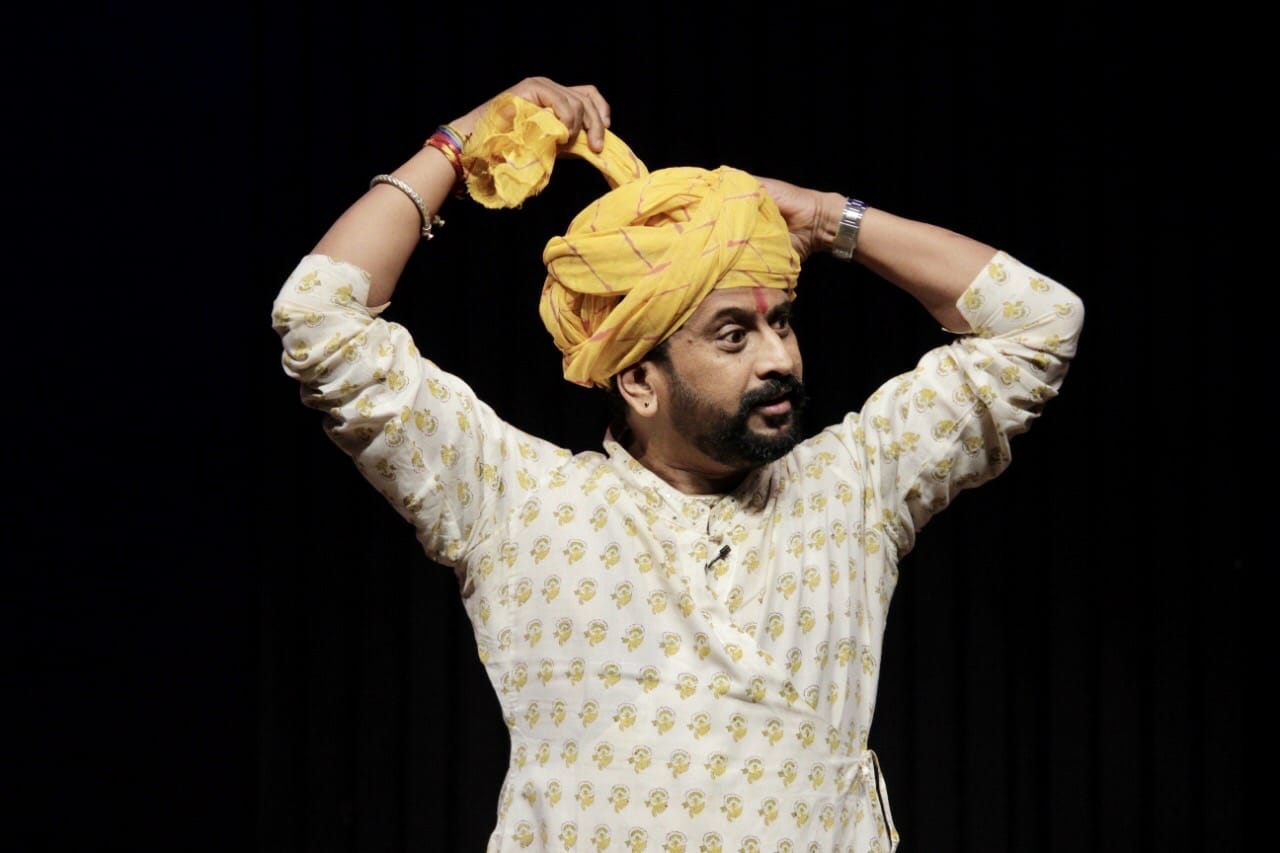 The last day of the theater and arts festival Rang Rajasthan was on Sunday. The festival was held at JKK and it was organised by the Department of Art, Culture and Archeology and Rang mastaaney Sanstha of Jaipur in collabration with Jawahar Kala Kendra. Sawai Bhatt and Raghdhaani Band performed in this festival in the last seven days, along with actor Piyush Mishra and his band BalliRaman also added colours to the festival. More than 15 plays were staged in Rang Rajasthan and interaction session with many theater stalwarts including Bollywood  Casting Director Mukesh Chhabra, Where they spoke on subjects related to theatre. On the last day three plays and a story session were staged.

The first play “Hum Bharat Ke Log” was staged at 12 noon at Krishnayan space of Jawahar Kala Kendra directed by theater artist Abhishek Goswami. This play was based on the events happening in the present which often happen in our society. The harsh reality of the country was depicted in the play. In which the actors tried to convey the message to the people through different stories.

After this, the solo play Bheli Bataan was staged at 2 o’clock in the Krishnayan auditorium itself. The play was directed, written and acted by Anil Marwari. This play was one such experiment which interacted with the audience and introduced them to the glorious culture of Rajasthan. In this conversation there was a small attempt to understand and explain the Rajasthani language through songs of Rajasthani lyricists, stories of story tellers, couplets, sorties etc. The audience played a big role in this session.

Story telling session “Hunkar” was organized in the festival which happened from 4 pm in the Krishnayan auditorium of Jawahar Kala Kendra. In this session Abhishek Mudgal, Director of Rang Mastaaney Sanstha narrated a story on “Friendship” and Deputy Commissioner of Municipal Corporation Shipra Sharma RAS narrated a story called “Anmol Khazana”. The story was well-liked by the audience.

After this, at 5 pm, the conversation session was held at Rang Chaupal. The theme of which was “Achievements of Art Festival of Rajasthan”. In this session, the organiser of Rajasthan Kabir Yatra, Shri Gopal Singh, organiser of Jodhpur Theater Festival, Shri SP Ranga and Shri Abhishek Mudgal, organiser of Rang Rajasthan Festival were present as speakers. RAS  Shipra Sharma was the moderator of this session. In which Gopal Singh ji told about his festival that the Rajasthan Kabir Yatra started in 2012, because we want to go to different folk artists and experience their art. This will give us a different experience. Ranga ji told about his festival that for the Jodhpur Theater Festival, all of us artists came together and made it a success. After this, more artists themselves joined and started working with us. Mr. Abhishek Mudgal said that the festival does not belong to one person, it has to be a team work. He told that when we joined Jairangam, we felt that we should also do a festival, then thought that we would call plays from Rajasthan. In this way the Rang Rajasthan started. He shared his entire journey with the people as to how the 7 editions of the festival were completed.

On the last day of the festival, the last performance of the play “Baanswada Company” was at 6 pm on the Rangayan stage of Jawahar Kala Kendra which was written and directed by Niresh Kumar. The actors and the entire team of the play came from Mumbai to perform at the Jaipur Festival. The play Banswara Company revolves around a director, a theater company and also his father, Khyali Chand’s dream of performing Shakespeare’s play soon.

After the staging of the plays, the Rang Rajasthan Festival culminated in Rangayan. In which Abhishek Mudgal, the organiser of Rang Rajasthan Festival, thanked every person who helped in making the festival a success. He also Thanked Jawahar Kala Kendra, Department of Art, Culture and Archeology, Rajasthan and Minister of Arts and Education, Dr. B. D. Kalla ji. At the end of the festival, the organiser Abhishek Mudgal introduced his entire team to the audience and wishes for another successful edition of Rang Rajasthan.