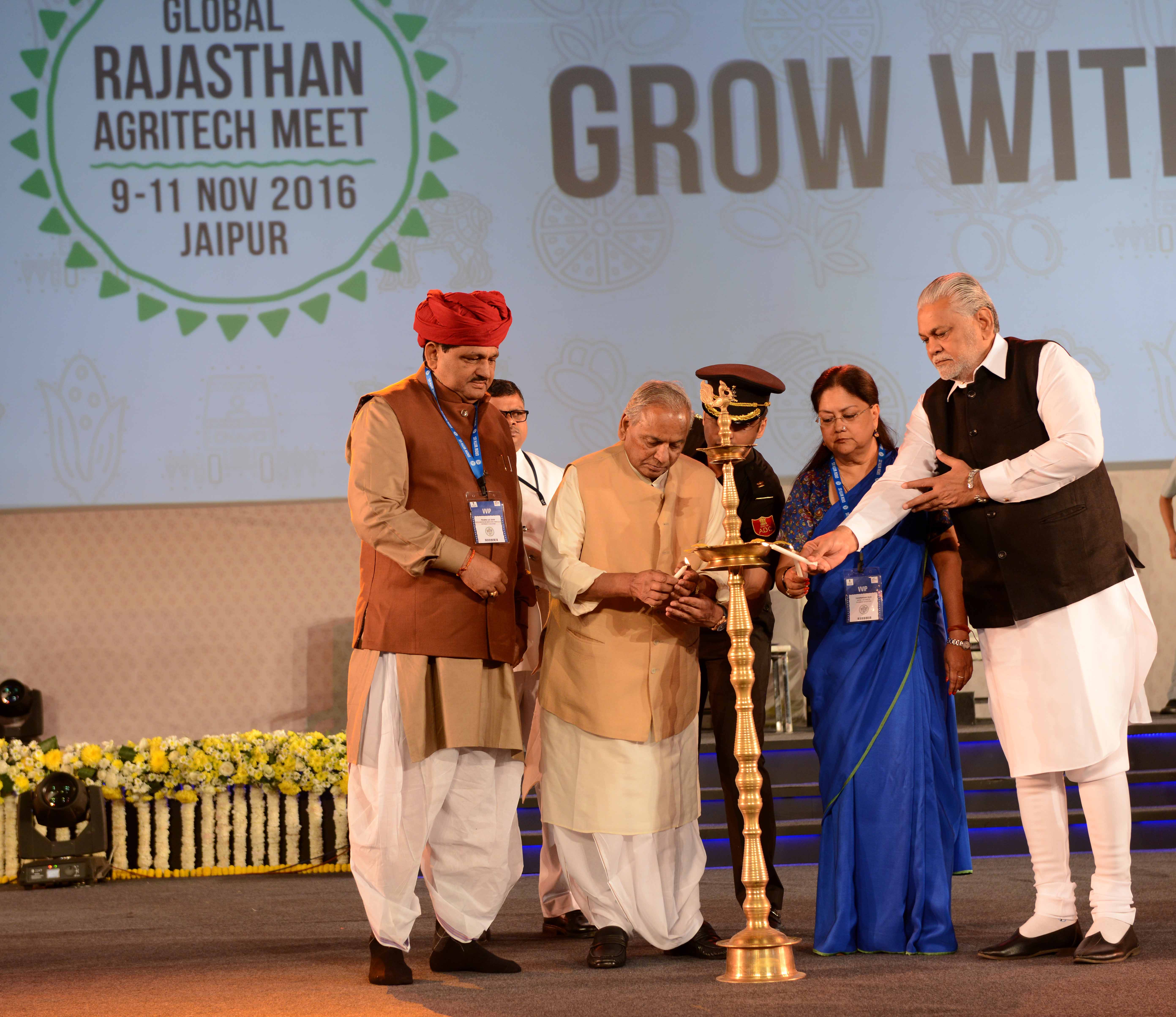 Jaipur, 9 November: Chief Minister of Rajasthan, Ms. Vasundhara Raje today categorically stated that Rajasthan stood committed to transform its agricultural landscape by actively promoting global best practices. With surplus production of food grains, milk and pulses, the State is geared up to adopt multiple innovations such as digital soil mapping, use of drones for effective input management, employing innovative protected cultivation methods, zero budget natural farming or technology enabled traceability systems. The end objective of these interventions in farming will be increasing efficiency, reducing costs and ensuring sustainability. Ms. Raje was speaking at the inaugural session of the ‘Global RajasthanAgritech Meet’ 2016 (GRAM 2016) today in Jaipur. The mega agri event has been jointly organized by Government of Rajasthan and Federation of Indian Chambers of Commerce and Industry (FICCI).

Chief Minister further said that the primary objective of GRAM is to ensure economic empowerment of the people through accelerated yet focussed growth in agriculture and to double farmer’s income. The state has conceived GRAM 2016 as an agri technology and business event that provides a platform to transform and catalyse sustainability and economic viability of farming.

Ms. Raje also said that Rajasthan has evolved as a strong investment friendly state and the Government is constantly working towards ensuring that these investments and benefit all stakeholders. Within just one year of holding the Resurgent Rajasthan Summit 2015, projects valued at almost Rs 5000 crores have already been implemented and projects worth Rs 54,000 crores and Rs 49,000 crores are under construction and under various stages of clearance respectively. Excluding the solar energy projects, the total likely investment to be grounded is Rs. 1.08 lac crores or 74 % of the investment commitments. This would be one of the fastest and highest conversion rates for any State in the country, she added.

The Chief Guest on the occasion, Governor of Rajasthan, Mr. Kalyan Singh said that for a smart nation it is imperative to develop not only smart cities but also smart villages. “Development of road, irrigation, education, electricity, health, security, employment, self-reliance are 8 major tenets which should be focused for developing a smart village,” said Mr. Singh.

He further said that the farmers, industry leaders, scientists and the government will have to join hands together to pave the way for doubling the farmers’ income by 2022. He also emphasized on increasing per acre products and productivity.

Union Minister of State, Agriculture Farmers Welfare and Panchayati Raj, Government of India, Mr. Parshottam Rupala said that Rajasthan is ahead of many other Indian States in the field of agriculture and is a leader in various agriculture products. “The State Government has successfully implemented all the Central Schemes in and has taken many decisions favorable for the welfare of the farmers,” said Mr. Rupala

Yog Guru, Baba Ramdev during his address announced setting up a mega food park. He said that the Rajasthan is working aggressively towards making the State agriculturally strong. “I along with Patanjali will support Rajasthan Chief Minister in all her endeavors. The company is entering into milk industry and Patanjali would be keen to make Rajasthan a part of itsjourney.”

He further said that if given an opportunity Patanjali is ready to work with the State Government in all the agricultural produce of the State including Aloe Vera Isabgol, Bajra and Amla. “Rajasthan ke bajre ko toh hum poore desh mei khilangey” he asserted.

In his Welcome Address, Minister for Agriculture and Animal Husbandry, Government of Rajasthan, Mr. Prabhu Lal Saini said that GRAM has brought together all stakeholders from farmers, academicians, technologists, agri business companies and policy makers to accelerate development of sustainable agriculture and allied activities through innovative methods and best practices.

He further said that the Israeli President, Reuven Rivlin will also be visiting India next week with two major agenda of discussion — Agriculture and Water.

A presentation was also made by Rajasthan Chief Secretary Mr. OP Meena who highlighted the investment prowess and potential in the Agriculture sector of Rajasthan.

Managing Director, Jain Irrigation, Mr. Anil Jain said that Rajasthan is going to be not just a green but an ever green revolution

Chairman, Mahindra Lifesciences, Mr. Arun Nanda said that Rajasthan has emerged as a leader in various Agri categories despite many challenges.

Rajasthan Knowledge Papers on Agriculture were also released on the occasion. Earlier, a colourful Rajasthani cultural presentation was also made.

The Vote of Thanks was proposed by National President, FICCI, Mr. Harshvardhan Neotia.