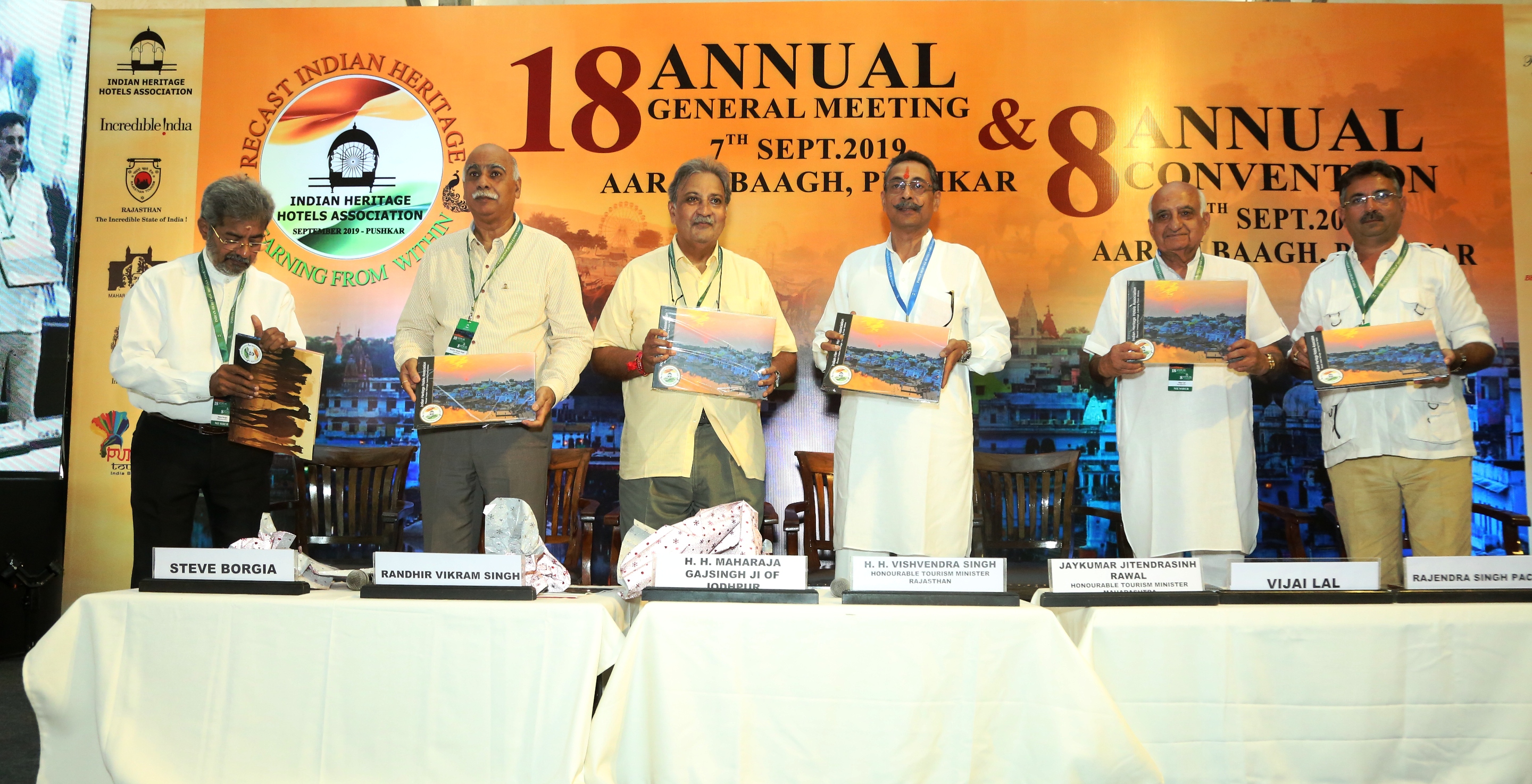 Rajasthan received approximately 5.19 crores domestic and foreign tourists in 2018. With release of the proposed new Tourism Policy and other liberal measures the tourist arrivals in the State are expected to increase to 10 crores in the next 5 years. This was stated by the Tourism Minister, Government of Rajasthan, Mr. Vishvendra Singh. He was speaking as the Chief Guest at the inaugural session of the 8th edition of the annual convention of Indian Heritage Hotels Association (IHHA) at Hotel Aaram Baagh in Pushkar. The 5th edition of the Coffee Table Book of IHHA was also released on the occasion.

At present a wide range of concessions for heritage hotels such as free conversion of land, exemption from road width norms, parking stipulations, etc. have been provided. With the new Tourism Policy there is scope for more incentives and enrichment of the sector. He also informed that under the leadership of the Chief Minister, Mr. Ashok Gehlot orders have been issued to waive off the requirement of obtaining any approvals for establishing new tourism units in the State, including heritage hotels, which are within MSME investment limits for the first 3 years.

The Minister further said that a MoU has been signed with UNESCO for reviving the arts like handicrafts, pottery, folk music and dance in Jaisalmer, Jodhpur, Barmer and Bikaner.

Talking about the investment and tourism potential of Maharashtra, Tourism Minister, Government of Maharashtra, Mr. Jayakumar Jitendrasinh Rawal said that Maharashtra can be divided into 5 types of regions in terms of different angles of tourism. The Nagpur area is known for its forest and tiger reserves, Aurangabad for historical sites, Nasik for devotional sites, Kolapur for forts and Konkan for dolphins. Furthermore, the State of Maharashtra also organises 6 tourism festivals such as Orange Festival, Mumbai Mela Shopping Festival, among others. Bollywood tourism is also a prominent attraction of the State.

Earlier during his Welcome Address, President of IHHA, Maharaja Gaj Singh Jodhpur said that IHHA has reached a new mark with 206 members across India. This year an effort has been made to bring together a number of event managers. Heritage hotels are now also increasingly dependant on events like weddings, film shoots, among others. The interaction with the event managers will benefit the hoteliers in bringing more such events.

Director (Investment Promotion), Madhya Pradesh Tourism Board, Mr. A.K Rajoria talked about the 5 W’s of tourism in Madhya Pradesh. These include– world heritage, worship, water, wildlife and wonders of nature.

Also on the occasion, the vote of thanks was delivered by General Secretary IHHA Randhir Vikram Singh.

Throughout the day, unique presentations on topics like Jal Bhagirathi Foundation by Executive Director Jal Bhagirathi Foundation, Ms. Kanupriya Harish; the art of franchising and being the Maharaja for your region by Maharaja Gaj Singh Jodhpur; looking at natural and rural tourism as an opportunity and development by CMD, INDeco Leisure Hotels and Vice President IHHA, Mr. Steve Borgia; Creating Heritage by Joint Secretary of IHHA, Gaj Singh Alsisar, Keeping the Flock Together and Future Plans by Mr. Randhir Vikram Singh and many more were presented.