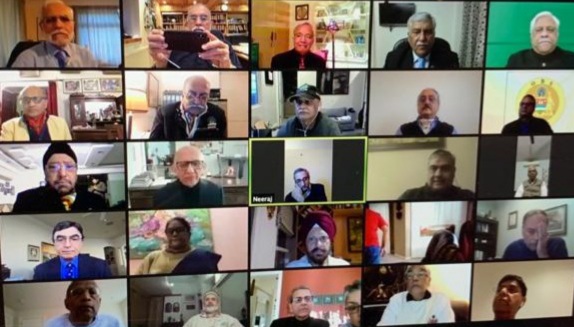 The batch of 1970 of Mayo College  celebrated its 50th anniversary of passing out virtually on Saturday. Owing to the pandemic, it was not possible for them to meet physically at the customary annual day of the well known Ajmer based school,  since it  had been cancelled. The batch members joined from all parts of the globe.

Deftly moderated by Deepum Bhatia, who was also the mainstay, the 2-hour virtual event began with remembering the 10 members of their batch who had passed away in the last 50 years. Pradeep Bhatnagar spoke about them and also welcomed the members of their family, who had also joined the event. Later, the Mayo College Director, Lt. Gen S. Kulkarni, who himself is an alumnus of the school, gave an overview of the developments and achievements of Mayo College. He emphasised on the fact that the school was making all efforts to develop state-of-the-art infrastructure and remain contemporary in the present times. This was followed by a fascinating presentation by the former English teacher, also an alumnus of Mayo, Mr. Suresh Mathur on how the four generations of their family, the Mathurs,  had served the institution for over 100 years. President of the Mayo College Old Boys Society , Col. Bhawani Singh, outlined the importance of networking among the alumni in the present times. Later, the former Head Boy of the batch, Mr Ajay Mehta, while giving a general overview of the batch, made an earnest appeal to introduce ‘peace education’ in the school in these troubled times. President of the Jaipur Chapter of Mayo Alumni, Jagdeep Singh narrated some amusing anecdotes and also highlighted how the  Chapter managed to get the Lord Mayo’s Statue unearthed from the Albert Hall Museum in Jaipur to be sent to the school. The event ended with  Alok Toshniwal, Dhruv Gopal Singh and Anil Lamba rendering  some  songs from their school prayer book which lent a nostalgic touch to the event.

The programme was interspersed with renderings of songs by the school orchestra.The batch decided to remain connected and also organise knowledge sharing sessions on different topics on a regular basis.