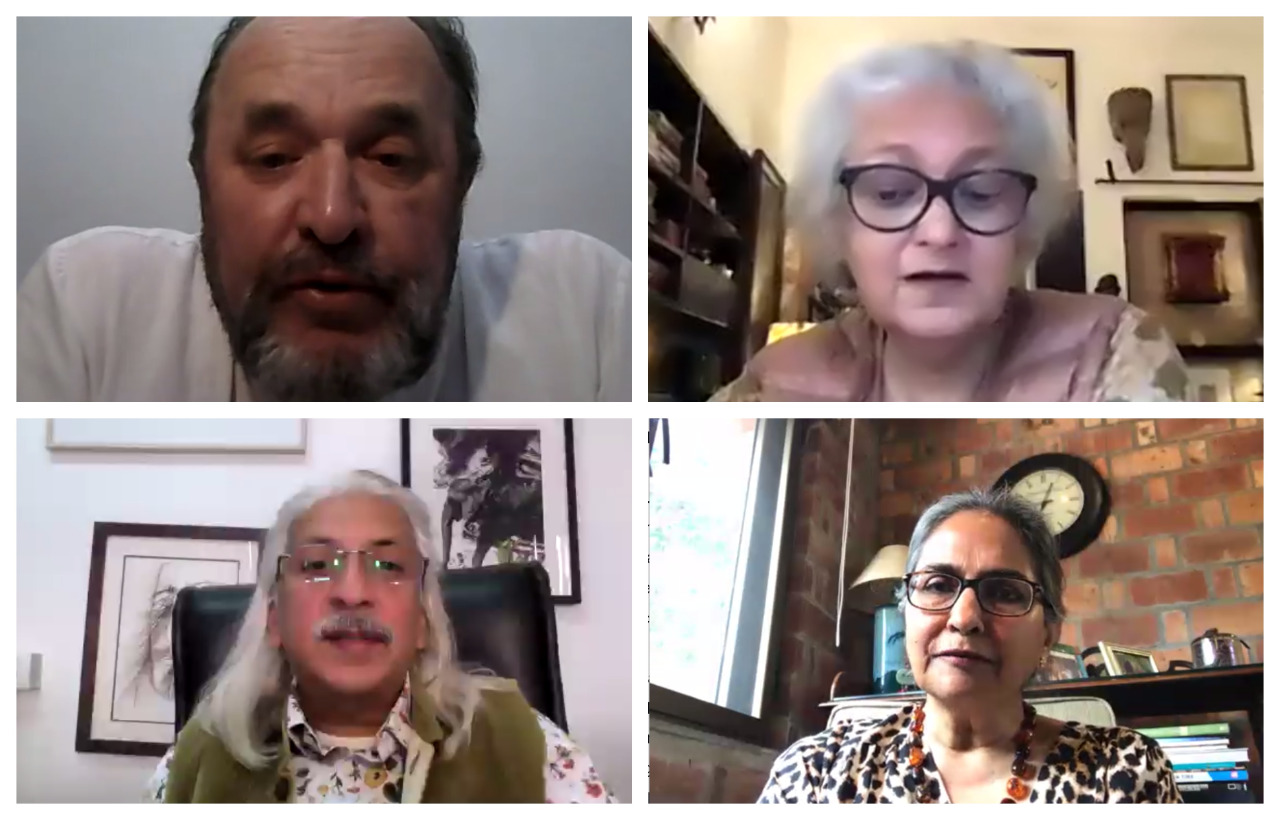 Hailed as the ‘greatest literary show on Earth’ and the ‘Kumbh of Literature’, the Jaipur Literature Festival 2021, will open tomorrow on its brand-new virtual platform which recreates the iconic Diggi Palace Hotel, offering an immersive experience for literature-lovers and festival-goers. The Festival continues to ‘celebrate the word’, bringing together a diverse set of voices and a gamut of ‘stories’ – fearless and funny, fiery and tender, fantastical and true-to-life, equivocal, atypical and every day.

With an ever-astounding line up of speakers and sessions, the Festival this year features over 300 speakers and performers representing around 25 Indian and 18 international languages and over 23 nationalities as well as major literary awards ranging from the Nobel, the Man Booker, the Pulitzer, the Sahitya Akademi, DSC Prize for South Asian Literature, JCB Prize for Literature.

The 14thedition of the Festival will begin on Friday,February 19th, with the inaugural keynote address by renowned author Sir Ian Blatchford, Director and Chief Executive of the Science Museum Group and Dr Tilly Blyth, Head of Collections and Principal Curator, Science Museum, London.

National Film Award-winning actress Priyanka Chopra Jonas made her American TV acting debut on the ABCTV-hit drama Quantico where she made history as the first Indian-born actor to star as the lead of an American TV drama series. Unfinished is a book following her journey through life and cinema. In conversation with author and columnist Shobhaa De, Chopra will explore her childhood in India, through her formative teenage years in the US, to her return to India where she unexpectedly won the national and global beauty pageants (Miss India and Miss World) that launched her acting career.

There will be an intense session on the interrelated schools of Indian music, which will discuss the constant creative interplay between classical and folk music as well as that of hybrid and popular genres in our online digital age. Acclaimed poet, writer, lyricist, CBFC chairman, communication specialist Prasoon Joshi and scholar, singer, musician, writer and social activist Vidya Shah will speak of their understanding and appreciation of musical traditions, and their evolution, occasionally breaking into song to explain or expand on a point. They will also throw light on the cultural diversity as well as the intrinsic unity of this vast heritage and its new offshoots.

Namita Gokhale and Malashri Lal’s co-authored play Betrayed by Hope follows the chequered life of poet and writer extraordinaire Michael Madhusudan Dutt. The script captures the anguishof a fractured identity as well as Dutt’s remarkable innovations in literary genres such as the epic and the sonnet. In a fascinating session of readings and discussion, Gokhale and Lal will be in conversation with actor and multidisciplinary artist Oroon Das and explore the paradoxes of Dutt’s life and work.

Author and Jaipur Literature Festival Co-Director Namita Gokhale said, “﻿The virtual edition of Jaipur Literature Festival 2021 is an absorbing immersive experience where we encounter an outstanding roster of great writers from around the world. It could be called a living library, or indeed a library of life. The challenges and disruptions of 2020 have transformed into the triumphs of 2021.”

Author and Festival Co-Director William Dalrymple said,” Despite pandemics and political upheavals around the world, the Jaipur Literature Festival continues to spread its wings and has transformed itself into one of the world’s most popular online spaces for profound discussions about books and writing. While this year’s Jaipur will be a quieter affair than usual, our commitment to literary excellence continues undimmed as we present one of our most extraordinary lists to date.”

Sanjoy K Roy, Managing Director, Teamwork Arts, the producer of Jaipur Literature Festival, said, “Jaipur Literature Festival 2021 has a stellar list and is possibly one of our best festival line ups ever with Nobel Laureates – Joeseph Stiglitz and Malala Yousafzai, an exclusive session with Bill Gates and Priyanka Chopra and an array of visually exciting sessions on music, dance, theatre, food, sustainability, innovation and much more.”

“We hope to enhance the online digital experience and capture an essence of the colour and diversity represented by Diggi Palace the home of this vibrant edition of the festival,”he added.

Preeta Singh, President, Teamwork Arts, said, “It’s been an exhilarating challenge and opportunity to work on this edition of the Jaipur Literature Festival, one truly unique and pathbreaking. Our immersive virtual format will delight our existing as well yet untapped audiences far and wide. With a bright vision of what festivals of the future will be like, we’ve created a masterful experience for literature lovers as well as brands that have partnered with us generously to celebrate the word and the power of stories, ideas, and dialogue in shaping our times.”

In a special session titled ‘The Connections and Disconnections Between India and China’, in conversation with author and Jaipur Literature Festival Co-Director William Dalrymple, Director of the Center for Global Asia and Professor of History, NYU Shanghai,Tansen Sen will set out on a singular mission: to fill the gaps in the narratives tying the regions, breaking through traditional conceptions of understanding India-China connections and proposing new ways to explore historical and contemporary relations.

Patrick Radden Keefe has always had a way with his words, powerfully laying out stories that illuminate a much larger picture. An award-winning staff writer for The New Yorker, Radden Keefe will give us a glimpse into his writing process and the source of his inspirations, in conversation with author and literary editor Finton O’Toole.

A powerful narrative on the stark realities of climate change, We Are the Weather: Saving the Planet Begins at Breakfast by award-winning author Jonathan Safran Foer takes a hard-hitting look at the day-to-day human contribution to the unfolding environmental catastrophe. Weaving personal stories, facts and metaphors, he will analyse what motivates some people to sacrifice short-term comfort for the sake of the long-term preservation of our climate by eliminating animal-based products from their diet. In conversation with journalist and Pulitzer Prize-winning author Jeffrey Gettleman, Foer will dwell on the changes that each one of us can make to mitigate the imminent and unfolding crisis.

The digital landscape is perhaps the most exciting space for creative potential today, having revolutionised traditional modes of consuming, interpreting and interacting with text-based narratives. The tide has increasingly shifted in support of online content, as streaming platforms constantly evolve, challenging viewer expectations and subverting the ways in which stories are created, absorbed and shared. In a fascinating session, the panelists – author Vikram Chandra, film directors and screenwriters Sudhir Mishra,VikramadityaMotwaneand Vice President, Content,at Netflix IndiaMonika Shergill,in conversation with Vani Tripathi Tikoo, will exchange ideas on the process of adapting dynamic scripts to the screen, reimagining the text for the visual medium and broadening the possibilities of immersive, authentic storytelling.

In another session, celebrated director and producer Vidhu Vinod Chopra and scriptwriter Abhijat Joshi will take the audience on an extravagant journey through the life, mind, method and madness of perhaps one of the greatest filmmakers Bollywood has seen today. Over the past three decades, Chopra has seen it all – from putting together low-budget student films to establishing the largest production house within the Indian film industry – he has presented the biggest blockbusters of the era while also introducing the audience to a sparkling list of actors who he took under his wing and nurtured to stardom. In conversation with journalist and actorVani Tripathi Tikoo, they will dive into a session on Chopra’s life and work and a friendship spanning decades.

Sport and a billion dreams: 2021 is a huge sporting year with the postponed Olympics and Paralympics and the men’s World Cup scheduled back-to-back. The women’s World Cup is also less than a year away in February 2022. From the recent evidence of the Australia series, it is clear that through sport, a new India is speaking out: an India that isn’t divided, that isn’t toxic and one that is secular and vibrant. This panel, which includes some of India’s best athletes and para-athletes like Pullela Gopichand and Mansi Joshi, men and women who are all great stories themselves, will celebrate the spirit of a new India and look ahead at the huge year in prospect. They will be in conversation with renowned author and sports journalist Boria Majumdar who has documented their stories in his books on cricket and Olympic sport.

Jaipur BookMark (JBM), the B2B platform that runs parallel to the Festival, will return for its 8th edition. JBM has become a one-stop-shop for publishers, translators, literary agents, booksellers and writers to meet, discuss ideas, and ‘talk business’. Jaipur BookMark2021 features sessions on the challenges for publishers and booksellers in the post-pandemic era, skilling for the publishing industry, translations and rights, market trends, distribution models and many other engaging discussions.

The Festival presents not just stimulating conversations on literature and the written and spoken word, but also includesmusical performances giving it a vivid cultural backdrop. Similar to the on-ground experience, the audience will be able to enjoy Morning Music every day during the virtual Festival with eminent musicians like – singer-songwriter from SrinagarAli Safuddin, known throughout the valley for his magnetic and captivating voice that amplifies the plight of his people and the cultural heritage of the Kashmiri community; versatile and popular singer Harpreet; HimaliMouwho sing ‘Pahaadi’ or mountain folk music from Uttarakhand;internationallyacclaimed performer, composer, cultural entrepreneur and music educator Shubhendra Rao; UK-based vocalist and composer Supriya Nagarajan; popular Hindustani classical vocalist Ujwal Nagar.

The Festival has been made possible with the support of partners who are committed to promoting it and believe in the value it brings to its audiences and literature-lovers from across the world.

This year the Festival has been ‘Protected by Dettol’ and ‘Supported by The JCB Prize for Literature’.

Diageo has joined hands with the Festival as Celebration Partner and Primus will be Knowledge Partner. The Delegation of the European Union to India, The European Union Prize for Literature, Cultural Relations Platform and Creative Europe will be Festival Partners and the Royal Norwegian Embassy will be Country Partner for JBM.

Amazon India has joined hands with the Festival as the Online Sales Partner. Talking about the collaboration,Pragya Sharma, Director, Category management, Amazon India, said “We at Amazon.in , strive to build the love for reading and learning. We are excited to partner with Jaipur Literature Festival as their official online book store. We continue to build a strong portfolio of books providing customers with vast selection and an unmatched shopping experience. Customers on Amazon.in can access a wide range of titles launched by bestselling authors during Jaipur Literature Festival 2021 on the specially curated store here.”

For this year, the media partners are Amar Ujala, Rajasthan Patrika, Morning Standard, Sunday Standard, Business Standard. Additionally,The Week will be the Magazine Partnerand Dailyhuntwill Streaming Partner for the Festival. Radio Partners will be Fever FM, Radio Nasha, Radio One and MY FM.