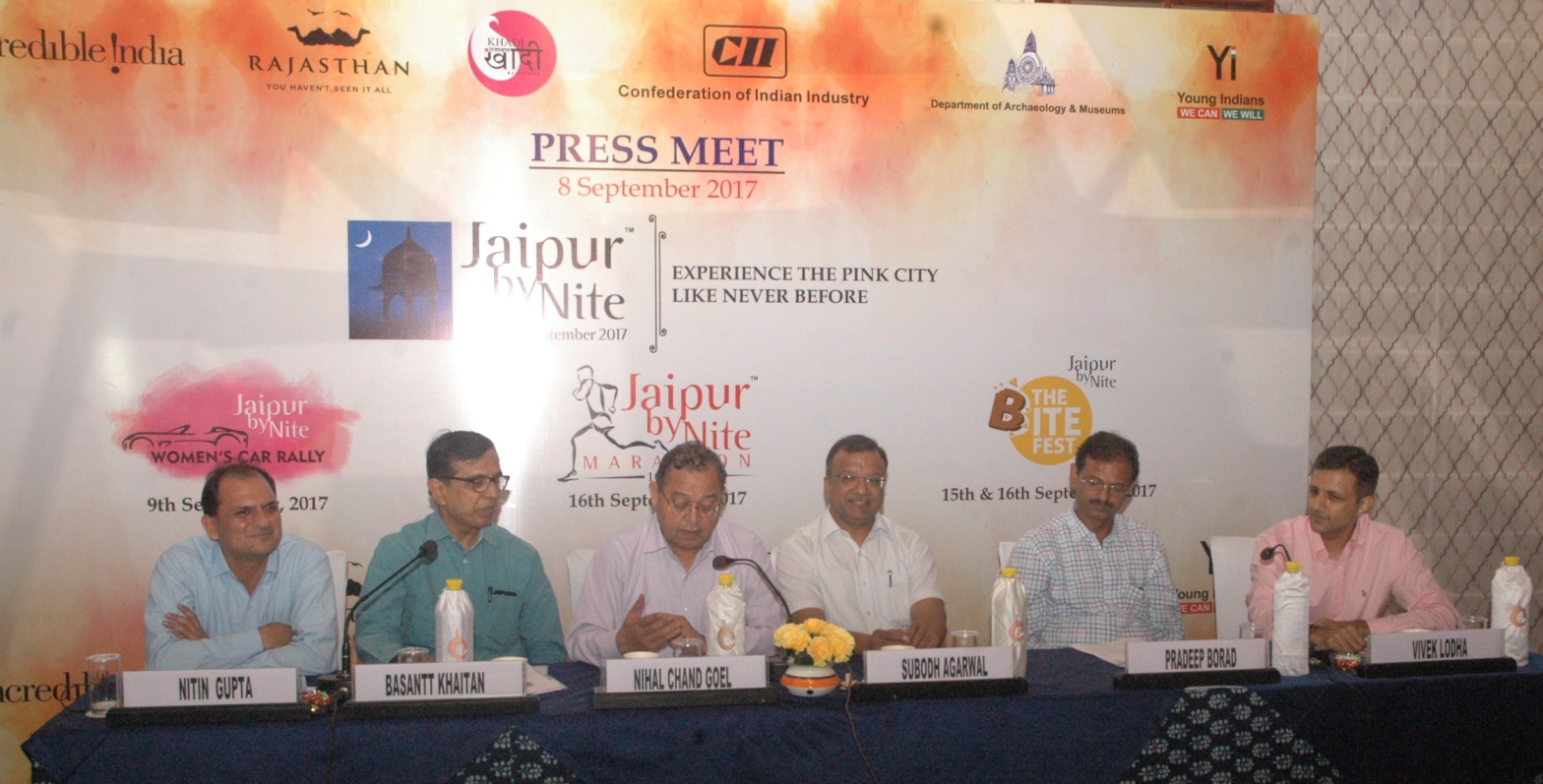 The ‘Jaipur by Nite’ will now be a regular festival on the tourism calendar of the State. This was stated by the Additional Chief Secretary, Tourism, Government of Rajasthan, Mr. N C Goel. He addressed a press conference to announce the 3-day festival at Hotel Clarks Amer.

The 5th edition of ‘Jaipur by Nite’, will be organized in the Pink City on 9, 15 and 16 September.  It is jointly being organized by Confederation of Indian Industry (CII), Young Indians (YI), Ministry of Tourism, Government of India  and the Department of Tourism (DOT), Government of Rajasthan. Rajasthan Khadi & Village Industries Board and the Department of Archaeology & Museums are also supporting the initiative.

The ACS further said that till last year, the festival was for two days only. Last year Night Marathon was added as a new feature while this year ‘Night Women Car Rally’ and ‘Bite Fest’ have been added. Looking at the growing popularity of the event, there is no doubt that it will become as significant a festival as Jaipur Literature Festival.

Mr Goel added that ‘Jaipur by Nite’ festival is also playing a significant role in promoting night tourism in the State. The Department of Tourism, he said, spent Rs. 60 crores on marketing last year and the budget is likely to go up to Rs. 100 crores. There is a significant jump of 17 percent in the tourist arrivals last year while in the current year, till date there is an 8 percent increase in tourist arrivals with the tourist season yet to begin.

The Chairman, CII Rajasthan, Mr Basantt Khaitan said that ‘Jaipur by Nite’ festival has been designed by CII to promote the long weekend and summer and monsoon tourism as also to showcase it as an option for short breaks, specifically in Jaipur. With the mornings and evenings being pleasant during the summer and monsoon months and the hotel rooms being available at reasonable rates is yet another factor for promoting this happening now in Jaipur.

Principal Secretary, MSME, Dr Subodh Agarwal, said that an elaborate stall of Khadi has been set up at the City Palace. This is in line with the tremendous efforts being put to promote ‘Khadi’ by the State Government.

The Chair of Young Indians, Jaipur Chapter, Vivek Lodha, said that ‘Women Car Rally’ has attracted over 175 women drivers who will participate on 9 September from 8.30 pm. It will start from the hotel and proceed to the South Gate of Ramniwas Bagh, JLN Marg and come back. The objective of the rally is to spread the message that women are safe in Jaipur.

Special features of the event will be the performances of Indian fusion rock band, ‘Indian Ocean’ and Rajasthani folk singer, Mame Khan. This programme will begin at City Palace at 5.30 pm on 15 September. The food festival called the ‘The Bite Fest’ will also be held on 15 and 16 September at the City Palace.  The ‘Jaipur by Nite Marathon’ will be held on 16 September from the City Palace. It will begin at 10 pm and has been divided into 2 categories:10 kms run (with timing chip) and for 5 kms (without timing chip). The Ambassador of Costa Rica; three senior Diplomats from Greece, participants from Indore, Gurgaon, Mumbai and many other places are running. More than 750 Runners have confirmed as of now.