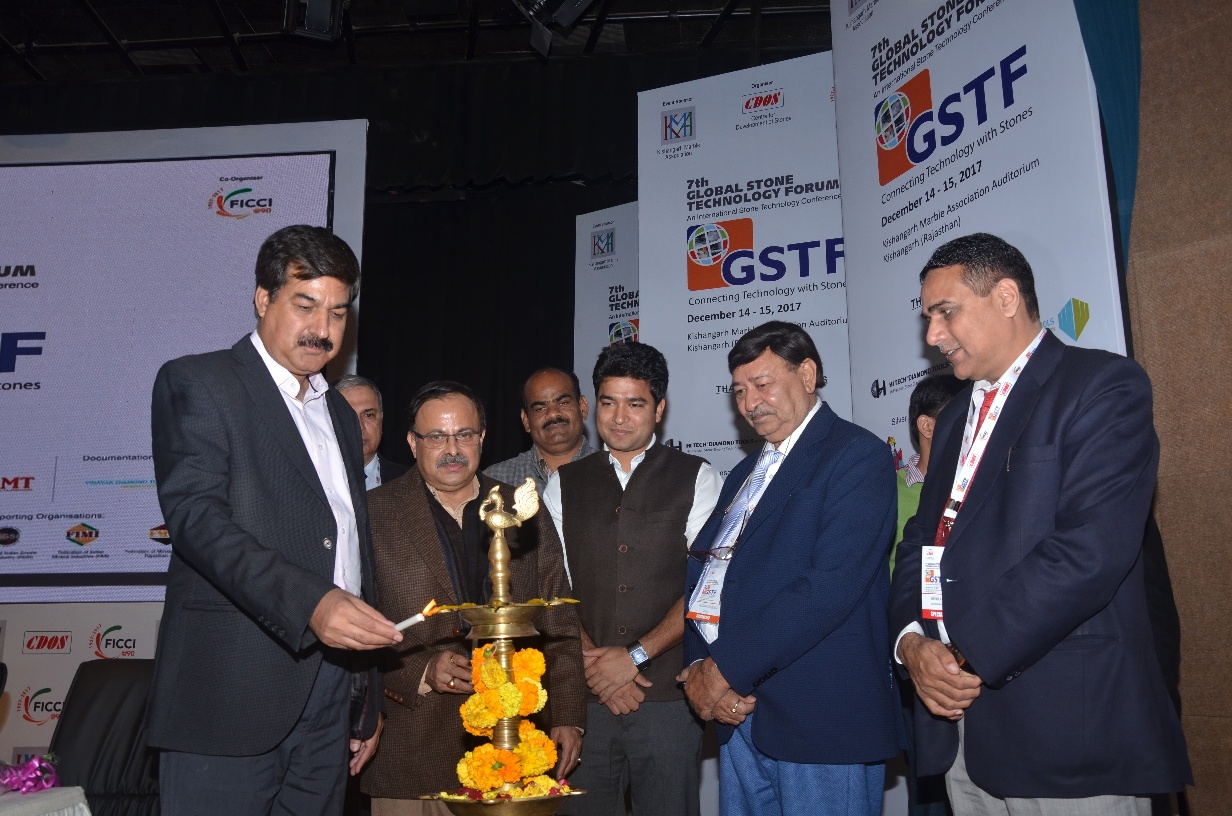 In a no-holds-barred address to the entrepreneurs of the dimensional stone industry, the Rajasthan Industries Minister, Mr. Rajpal Singh Shekhawat cautioned that new technology and innovation was of paramount importance and if not adopted the sector will be left behind. In fact, he underlined its importance by repeating the word ‘technology’ thrice saying that it was the most important factor not only for prospering and progressing but also of surviving.

The Industries Minister was speaking at the inaugural session of the 2-day 7th edition of Global Stone Technology Forum (GSTF) which began on 14 December in  Kishangarh. The event was being jointly organized by the Centre for Development of Stones (CDOS) and Federation of Indian Chambers of Commerce & Industry (FICCI) with the support of Kishangarh Marble Association.

The Minister further said that the constant upgradation in technology and adoption of newer techniques in mining, processing and value addition will play a major role in transforming the sector. In fact, it will lead to exponential growth. The Minister also suggested that what is being termed as ‘waste’ in the sector can also be fruitful with ways and means to find its potential and exploit it.

The Minister said that with 18,000 stone units in the State the sector contribute the immensely to the economy and employment generation of the State. He hoped that the 2-day forum will play a pivotal role in creating awareness among the participants about the importance of adopting new technology.

In the Key Note address the Additional Chief Secretary Industries, Chairman, RIICO & CDOS, Mr. Rajeeva Swarup said that in the current situation there is a huge competition to the dimensional stone sector by alternative products. To remain profitable and relevant in the face of this competition GSTF will create credible awareness about new and innovative technologies in the dimensional stone sector. With world renowned experts throwing light on the modern techniques the delegate will stand to benefit through knowledge sharing and interaction.

Mr. Swarup urged the participants to exchange views on different topics of the sector like mining, processing, technology, waste management and environmental protection. He also informed that with Rajasthan contributing more than 90% of the total production of marble sandstone and Kota stone in the country the State stood poised for a quantum jump in the sector.

Earlier in his welcome address, the Vice Chairman of CDOS, Mr. Ashok Dhoot thanked the Industries Minister and the State Government for putting across the demand for decreasing the GST on marble products from 28% to 18%. He also said that the dimensional stone industry must also innovate and find ways to compete with alternative products like ceramic tiles.

Mr. Giorgio Bignone threw light on the history of Pedrini. He said that Pedrini achieved a milestone in 2016 by introducing the Multiwire Machine for marble cutting. An AV presentation on how the multiwire machinery works was also shown. Mr. Vinod Bhati explained in detail the Microwave Technology for Stone Industry which is used for heating stone slabs. He highlighted the benefits of this technology over the conventional one by stating that it is energy efficient, saves on cost and time and has no health hazards.

Mr. Abhilash Bhati gave a presentation on waterjet technology. He said it is a cold cutting process which cuts by supersonic water, or water and abrasive, to erode material. Owing to this, waterjets have no limits to what they can cut.Representative, Hualong Machinery Co. Ltd., Mr. Ramesh Khattar talked about the importance of high technology and value addition in machines. The session was moderated by the CEO, CDOS, Mr. Mukul Rastogi.