“IN EACH AND EVERY ACTION OF MAHATMA GANDHI, THE MESSAGE OF ‘AHIMSA’ IS PREVALENT” -DR. B.D. KALLA RAJASTHAN MINISTER OF ART & CULTURE

HomePress Release“IN EACH AND EVERY ACTION OF MAHATMA GANDHI, THE MESSAGE OF ‘AHIMSA’ IS PREVALENT” -DR. B.D. KALLA RAJASTHAN MINISTER OF ART & CULTURE 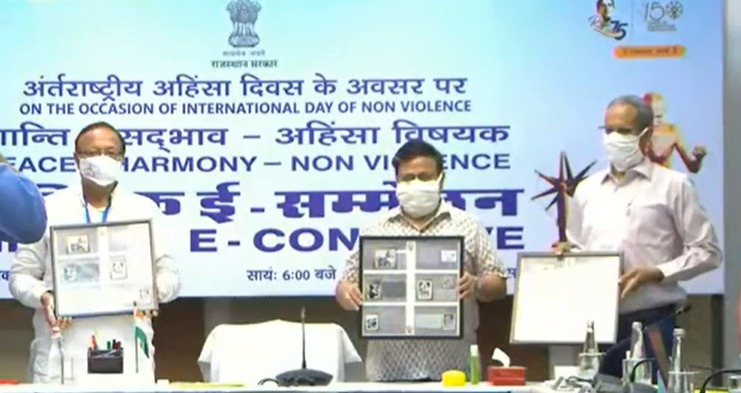 “IN EACH AND EVERY ACTION OF MAHATMA GANDHI, THE MESSAGE OF ‘AHIMSA’ IS PREVALENT” -DR. B.D. KALLA RAJASTHAN MINISTER OF ART & CULTURE

Mahatma Gandhi believed in practicing ‘Ahimsa’ (non-violence) not only physically but also spiritually through one’s mind, actions and speech. The world is celebrating ‘Gandhi Jayanti’ as ‘Ahimsa Divas’. Gandhi always preached that work that could not be done with arms can be achieved with ‘Ahimsa’. This was stated by Minister of Art and Culture, Government of Rajasthan, Dr. B.D. Kalla. He was addressing the ‘Global E-Conclave on Peace, Harmony and Non-Violence’ on the occasion of International Day of Non-Violence. The programme was presented by the Department of Art and Culture, Government of Rajasthan.

Chief Secretary, Shri Rajiv Swarup said that peace and nonviolence have always complemented each other. Today, when the world sitting is on the grenade of imperialism, expansionism, capitalism, terrorism and arrogance it has the ultimate need for Mahatma Gandhi.

During the opening remarks, Secretary, Department of Art and Culture, Government of Rajasthan, Ms. Mugdha Sinha said that Mahatma Gandhi gave the mantra of world peace to Earth. Inspired by the truth, he gave us the machinery for world victory and always called for freedom from sin.

Delivering the Inaugural Address, President of Ekta Parishad, Shri P.V. Rajagopal said that in a world where people are forgetting the teachings of Mahatma Gandhi, Covid has reminded us to follow his teachings and learn from his principles.

In his keynote address, Indian British-activist, Shri. Satish Kumar who connected from London said that non-violence and Mahatma Gandhi are synonymous. But for Mahatma Gandhi, non-violence was not only a way of resistance or protest, for him, it was a way of life.

Agricultural economist and teacher, Mr. Jean Louis Bato who connected from France said that with globalisation, recent accumulation of wealth, competition, destruction of natural resources, biodiversity and climate, there is need to create a new paradigm.

Italian Social-activist, Sonia Deotto said that it is the fundamental expression of ‘Ahimsa’ that implies dialogue, empathy and a process of self-transformation to purify our hearts. It is important to remember that Mahatma Gandhi achieved Swaraj through constructive programme of Ahimsa which was established on the basis of unity in diversity.

Dr. Ramphele Matala who connected from South Africa said that Mahatma Gandhi reminded us that there are enough resources for everyone’s needs but not enough for everyone’s greed. Covid-19 is a disruptive reminder that we are facing multiple planetary crises that have been brought upon ourselves by ourselves.

Co-chair of Mahatma Gandhi Canadian Foundation for World Peace, Ms. Reeva Joshee who connected from Canada said that the Rajasthan Department of Peace and Non-violence is working effectively to bring Gandhi’s philosophy to its people, keeping education at the forefront.

Also, on the occasion postcard ‘Gandhi and Vigya’ was unveiled by the Minister. A Laser show on Gandhi’s life showed at Hawa Mahal, Amer and Albert Hall was also showcased. Apart from this, well-known hymns of Gandhi were also presented through VC.