ENTHRALLING FUSION OF JAZZ AND WESTERN CLASSICAL MUSIC AT JKK 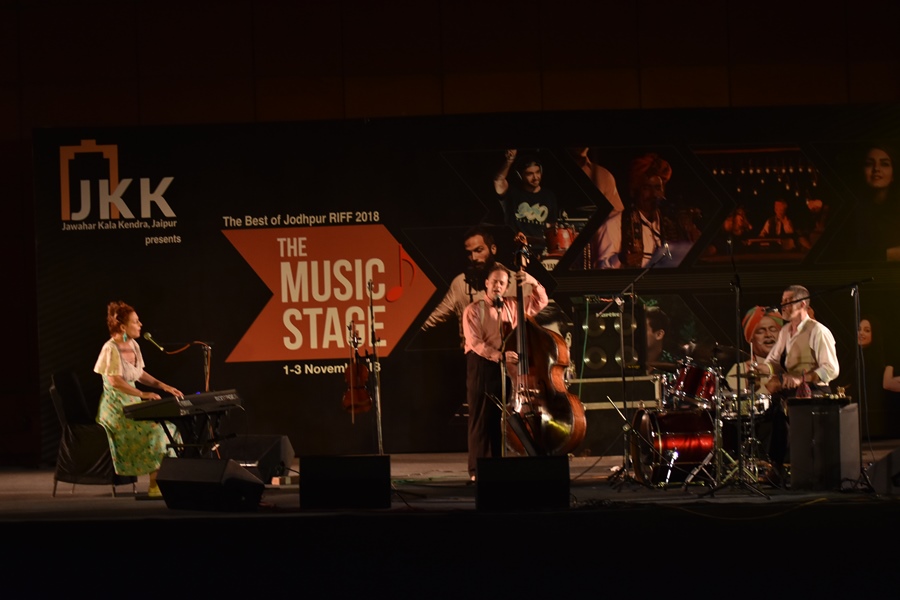 ENTHRALLING FUSION OF JAZZ AND WESTERN CLASSICAL MUSIC AT JKK

Day 2 of the 3 day musical festival ‘The Music Stage’ being held at the Jawahar Kala Kendra (JKK), staged a mesmerizing blend of Jazz and western classical music.  While the artistes for the evening were Makan Ashgvari from Iran and Bush Gothic from Australia, various other international and national artistes from Jodhpur RIFF also participated in the festival.

‘Bush Gothic’ from Australia opened the concert. The band is known for their darker, stranger Australian folk music. The performance included various traditional folk songs from Australia like Convict Maid and Ten Thousand Miles Away, along with band’s all-time hit numbers ‘Jim Jones’ and ‘Here’s Adieu to All Judges and Juries’. The band members included lead singer Jenny M. Thomas on vocals, keyboard and violin, Chris Lewis on Drum kit and Dan Witton on Banjo – Mandolin and Double Base.

The concert then proceeded with renditions by singer and music director Makan Ashgvari from Iran. He presented traditional songs of Iran with infusion of African rhythm with an original touch. The presentation also included a traditional wedding song from Iran and the ‘song of Zarr’, which is a healing song. The performance was accompanied by Sanaz Sattarzadeh on Taar and Ali Gharemani on Jazz and Classical Guitar.

On the concluding day (3 November), there will be Morning Raag by Mahesha Ram Meghwal at 7 am. In evening, from 6.30 pm onwards, a percussion extravaganza will be presented by Gene Peterson and Beatboxer Tom Thum from Australia in collaboration with Rajasthani Musicians.

At 7:30 pm, there will be Rajasthani folk performances by Manganiyar and Langa musicians and Maand gayan by Babu Lal Bhat and Daya Ram Bhand. Folk dances will also be presented including Gair, Ghoomar, Fire dance, Chari, Behrupiya along with Kathputli, Human Puppets and Algoza and Nagada Vadan, altogether.

The performances will be held at Madhyawarti and entry is through tickets which can be obtained from JKK’s reception. There will be no entry tickets for Morning Raag.