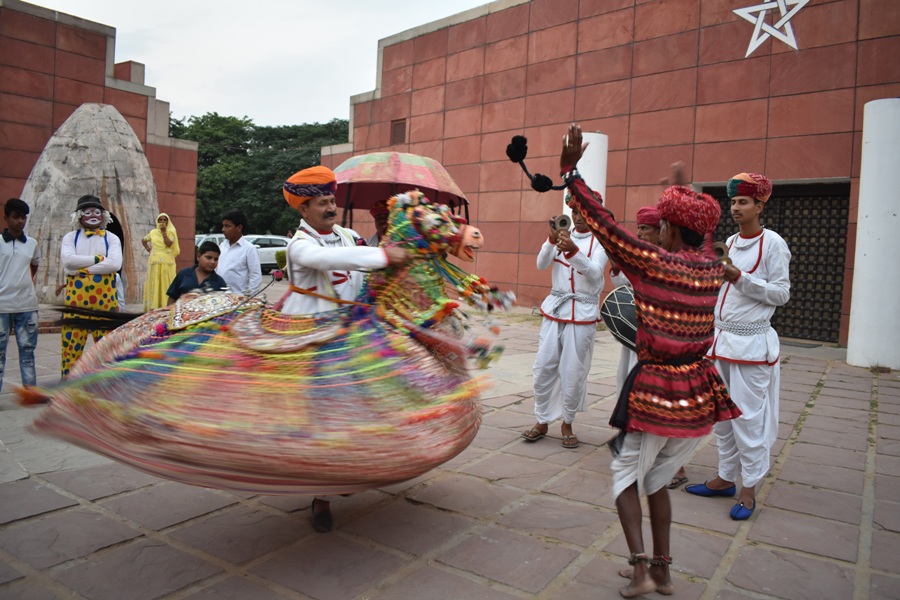 The 3 day Music Stage being held at the Jawahar Kala Kendra (JKK) concluded with a host of cultural activities and performances.

The day began with Morning Raag, in which Mahesha Ram Meghawal renditioned folk songs and bhajans by Kabir, Meera and Daadu.

The concert in the evening then opened with a Rajasthani folk music performance by Raitila Band, a mix of Manganiyar and Langa musicians, featuring Duff and Dayereh artiste Hamta Baghi from Iran. They performed Krishna Bhajan, a welcome song ‘Mithuda Mehmaan Ghar Aaya’ and a song for Diwali along with popular sufi numbers like Tere Ishq Nachaya and Chaap Tilak. The band members included Bundu, Bhutta and Sardar Khan on vocals, Zakir on Khartaal, Shakur on Morchang and Algoza, Eklas and Aseem on Sarangi, Lateef on Dholak.

It was followed by a Ghoomar performance by 20 artistes, directed by Kaushal Kant Panwar.

The evening then proceeded with the international artistes for the day- Gene Peterson on drum kit and Beatboxer Tom Thum. Highlight of the evening was a fusion between the Rajasthani musicians and Gene Peterson and Tom Thum in which they played songs like ‘Anta Bahar Di Khabaran’, ‘Luna Gar’, ‘Kesariya Bana’, among others. The Rajasthani musicians were Firoz Khan on vocals and Dholak, Kheta Khan and Bhavru Khan on Khartal, Shakur on Morchang and Algoza, Yusuf Khan on Bhapang and Narsing Lal on Nagada.

The cultural extravaganza then concluded with a finale performance in which all the artistes including Gene Peterson and Tom Thum performed together with 40 dancers, bringing an amalgamation of culture, music and dances. A number of traditional folk dances of Rajasthan like Gair, Ghoomar, Fire dance and Chari were also part of the performance.