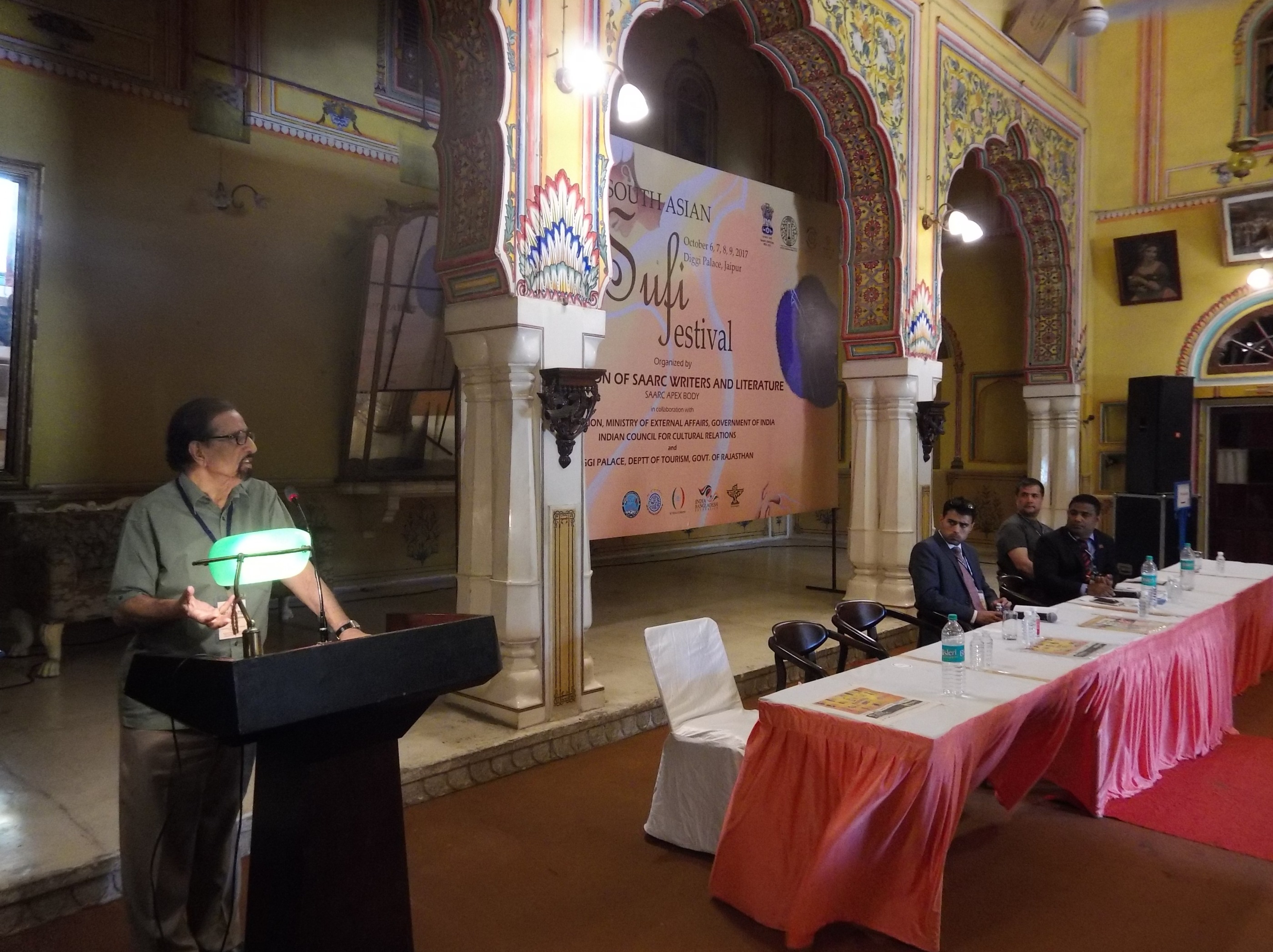 The 3 day South Asian Sufi Festival, organized by Foundation of SAARC Writers and Literature (FOSWAL) at Diggi Palace in Jaipur, concluded today. Academic paper presentations as well as poetry recitals went on throughout the day by delegates from Afghanistan, Maldives, Bangladesh, Sri Lanka, India and Bhutan.

Sufism and its influence in Bangla Poetry

Addressing a gathering of Sufi scholars, writers and poets she also said that Rabindranath’s poetry was quite influenced by Sufism and spirituality. In fact, Tagore was the first poet to translate Kabir’s dohas into Bangla.  Shafin concluded her presentation by stating the belief of Sufi poets – “It is by only knowing the human body that one can know God.”

Adding to the above discourse, President, South Asian University, New Delhi,  Kavita A. Sharma said that in pre-colonial times there were no boundaries in terms of spirituality, poetry, art, craft as well as literature. However, since the colonial times the political boundaries and identities have become watertight thereby also reducing the inflow and outflow of spiritual ideologies and beliefs.

She further said that the idea of religious tourism, which is now being promoted extensively, has been in place since older times. Visits to mazars, mosques and other pilgrim centers has been a tradition that has been followed since centuries.

Professor Mahboob Shah Mahboob from Afghanistan traced the origins of Qawwali which is a form of Sufi devotional music. He said that there is a lot of debate among historians regarding who founded Qawwali. However, Delhi’s Sufi Saint Amir Khusro of the Chishti order of Sufis is credited with fusing the Persian, Arabic, Turkish and India in the late 13th century in India to create the structure of Qawwali, pointed out Mahboob.

Continuing the discussion on this topic, Professor Riyaz Punjabi from India shared that Qawwali has been a perpetual point of concern for a section of Muslims who are opposed to music. However, Qawwali is closely connected with Sama which connects one to the divinity on a mental level.

Do we need Sufism?

In his paper presentation, Dr. Syed Ahmad Hossein from Afghanistan, examined the question if one really needs Sufism? He co-related this question with the basic specifications of human personality and opined that in order to achieve a desirable personality, Sufism is essential. The doctrine of Sufism helps in shaping one’s behavioural code of conduct, vision, mission, goals and objective in life. Therefore, Sufism’s lessons and teaching styles go a long way in ensuring a successful life journey.