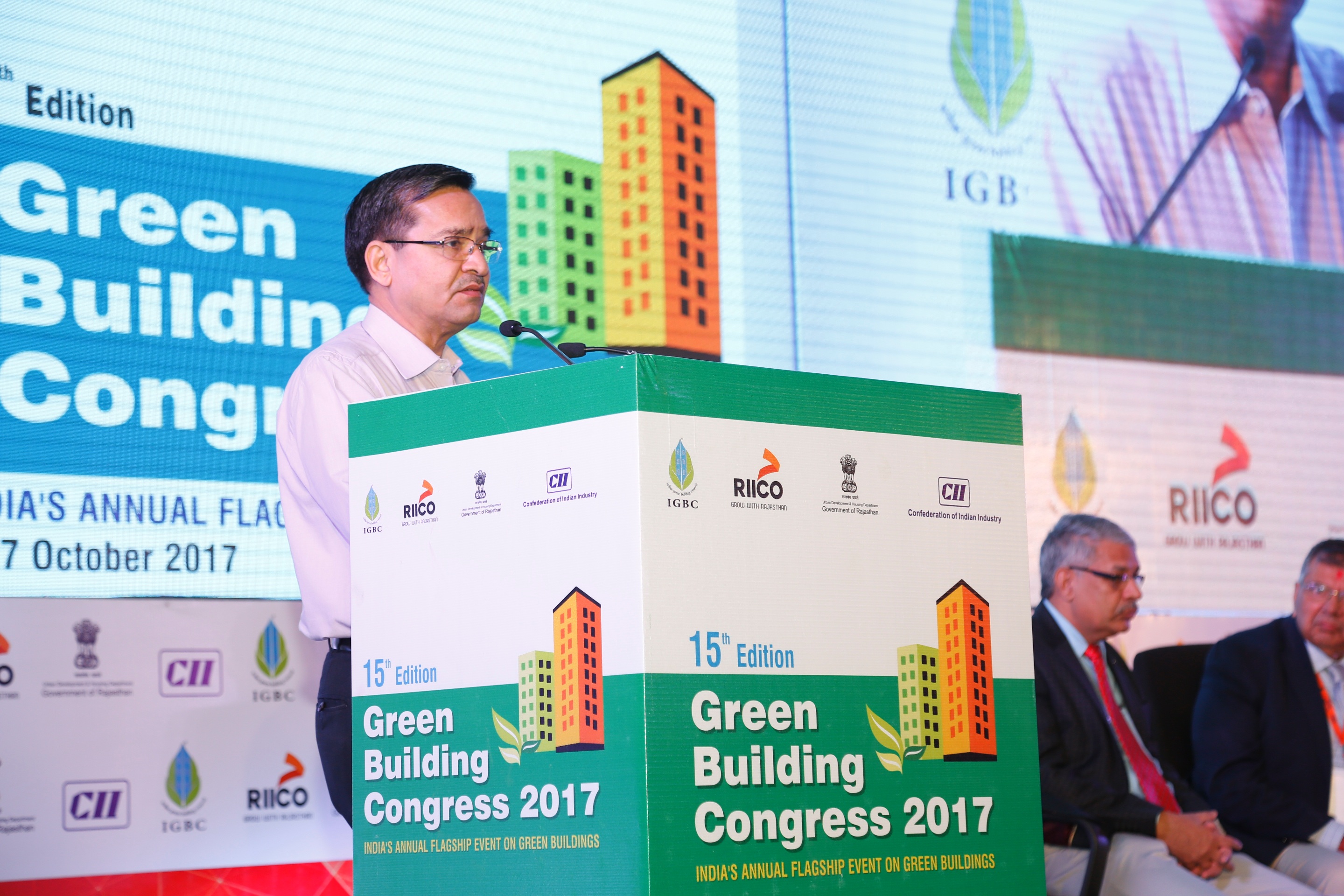 Government of Rajasthan will offer all the possible support and cooperation in further accelerating the growth and spread of green buildings in the State, said Mr. Ashok Jain, IAS, Chief Secretary, Government of Rajasthan at the concluding day of the CII-IGBC Green Building Congress 2017. A stronger framework of incentives will be created through stakeholder consultations, he added. Presently the Jaipur Development Authority (JDA) is offering a 5% FAR for Green Building projects.

He further added, “Green buildings have gained fast momentum, indicating significant interest and demand.  To further facilitate the growth, there is a need for architects and consultants to advise the developers on the long-term benefits of implementing green building concepts. The government will extend all possible support to the stakeholders in promoting green buildings.”

Speaking on the occasion, Mr. Sanjay Malhotra, IAS, Principal Secretary, Energy Department, Government of Rajasthan said that the Energy Department has taken up numerous initiatives to promote renewable energy and energy efficiency in the State.

IGBC in its continued efforts to inspire young minds and encourage them to come up with innovative and futuristic green ideas, annually conducts Green Your School contest supported by Carrier-Toshiba. CII-IGBC also organizes the annual Architectural Design Competition supported by Daikin. These programs have been evoking excellent response from the students’ community across the country.

The following schools received the Green Your School contest award 2017:

Each winning school will receive Rs. 2.5 lakhs to implement the proposed green features in their respective schools.

The winners of IGBC Green Design Competition 2017 include the following:

Highlighting the country’s achievements of through the Green Building Movement, Mr. V Suresh, Chairman, Policy & Advocacy Committee, IGBC highlighted the need of smart cities and AMRUT cities adopting green building concepts. He also requested the Government to convert exiting government buildings into green buildings. He also underlined that the green building concept with the support of local IGBC chapters is spreading beyond metros to Tier 1 and Tier 2 cities. IGBC aspires to facilitate 10 billion sq. ft. of green building footprint by 2022.

The conference also featured concurrent sessions on Affordable Housing, Green Schools and Green Hospitals. The session on Green Hospitals aimed at highlighting the importance and benefits of incorporating green features in hospitals which would result in faster recovery, energy management and less generation of waste.