‘CITY FOR ALL?’ SHOWS JAIPUR HOW TO DESIGN AND BUILD INCLUSIVE PUBLIC SPACES AT JAWAHAR KALA KENDRA

HomePress Release‘CITY FOR ALL?’ SHOWS JAIPUR HOW TO DESIGN AND BUILD INCLUSIVE PUBLIC SPACES AT JAWAHAR KALA KENDRA 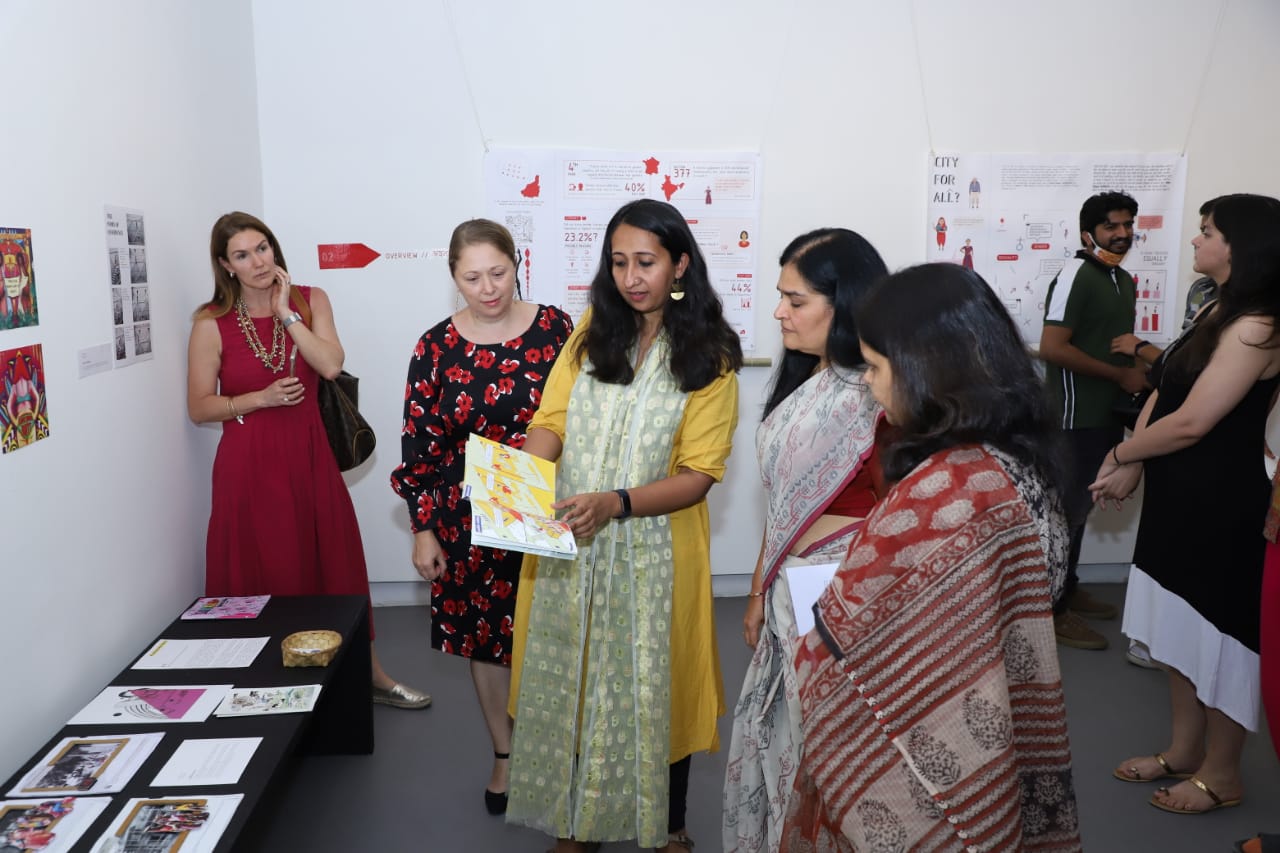 ‘CITY FOR ALL?’ SHOWS JAIPUR HOW TO DESIGN AND BUILD INCLUSIVE PUBLIC SPACES AT JAWAHAR KALA KENDRA

Bonjour India’s City for All? was inaugurated at Jawahar Kala Kendra (JKK). It is part of the Bonjour India initiative, an artistic, cultural, educational, and social initiative by the Embassy of France and its cultural service, Institut Français en Inde, the Alliance Française Network, and the Consulates of France. It will conclude tomorrow (3 April). This will be the climax of the first leg of this exhibition.

On the occasion, the Chief Secretary, Ms. Usha Sharma said that France and India share a beautiful relationship. She appreciated the efforts of the curator of the exhibition, Swati Janu and her team and said that the exhibition raises important questions about access and shares insightful findings from women from different parts of the city.

Earlier Ms. Gayatri Rathore delivered the welcome address and said that she looked forward to more art and cultural programmes organized by the Government of Rajasthan and French Embassy together.

At the inauguration, visitors discovered novel solutions that can make public spaces more accessible to women and transgender people.The visitors were also entertained by the live music performance of Sumitra Devi and guided through a curated tour by the talented architect and artist as well as curator of the exhibition, Swati Janu.

The exhibition will be open for public viewing tomorrow (3 April) throughout the day. There will also be a play and silent performance from 6 pm onwards.

The ‘City for All?’ exhibition endeavours to make public spaces in Indian cities more accessible to women and transgender people by engaging the masses in public art projects. The week before the scheduled exhibition, a pin-up map of the city travelled across 6 Jaipur neighbourhoods. The chosen neighbourhoods were diverse to allow people from different backgrounds to partake in an activity. People in these neighbourhoods were asked where they like to go with family and friends. They pinned coloured ‘bindis’ on these locations on the map. Through this activity emerged discussions around what makes a public space inclusive for different groups of people.

Participants were asked a pressing question, ‘who are our cities designed for?’ They were also asked questions they never thought of before such as: who has the right to leisure in their cities?, how can women and transgender people feel welcome, comfortable, and secure in public spaces?, what barriers do transgender people encounter when they try to occupy public spaces?, how can access to public spaces be increased for people of all ages, genders, sexual preferences, classes, and abilities?, and what do they (the participants) consider to be an ideal public space? The participants were posed these questions and after discussions answers to them were found, what emerged was a way to rethink the public spaces in Jaipur such that they become more accessible to women and transgender people.

During the festival, the maps used in this project are being exhibited. Accompanying them are dialogues and stories that emerged from each Jaipur neighbourhood. An interactive public wall is allowing visitors to engage with the exhibition. As a result, more discussions around public spaces and how to make them more accessible to women and transgender people are taking place. Also, at the exhibition is a photo booth that displays popular local and French landmarks in the background. Visitors were seen clicking lifelike selfies with such landmarks as the backdrop.

Speaking about the inauguration and exhibition, Ms Dana Purcarescu, Deputy Chief of Mission, Embassy of France in India, said “True to its name, the City for All? exhibition seeks to answer an important question – how can public spaces in cities be made more accessible and safer for women and transgender people? This is a difficult problem but one which the exhibition tackles through fun and interactive activities. The solutions that emerge will be novel because they will use inputs from the grassroots. These will be real and actionable solutions. In a vast country like India, where states are as large and diverse as European nations, the ideas that crop up in the six cities where the exhibit is being held will be a treasure trove. The solutions will provide insights that have applications beyond India’s borders.”

Ms Purcarescu went on to say, “At the weekend exhibit in Jaipur, the information from the preceding week has been compiled and presented in an elegant and interactive setting. The inauguration in Jaipur was special indeed!.”

Architect and artist Swati Janu said: “Cities across the world are designed by men. Hence, women and transgender people must navigate in urban worlds that were never created with their needs in mind. We need to look more closely at urban landscapes and figure out how they can be thoughtfully designed so that women and transgender people feel at ease and safe in them. Doing so demands a nuanced approach. Consider the benches, tables, chairs, and other furniture that is commonly found in public places. While men have no difficulty using these, transgender people find them anguishing. Such facets need to be redesigned so that everyone, not just men, can comfortably use them. We are certain that from ‘City for All?’ solutions will appear that help us radically change the architecture of our cities. With some hard work, a few years down the road, urban spaces across India will look quite different than they do.”