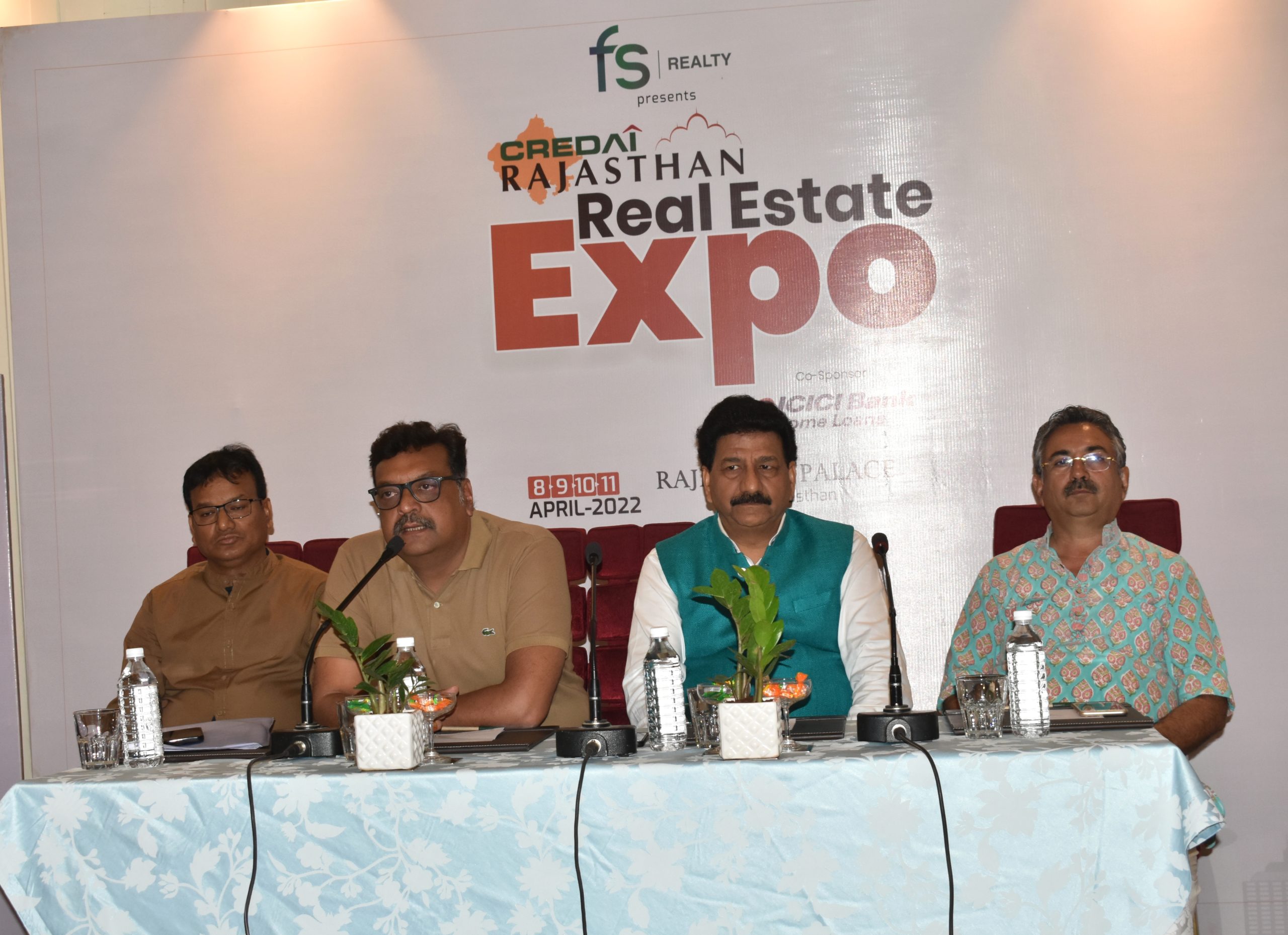 After a gap of two years due to Covid-19, the builders and developers of real estate of Rajasthan are once again going to organize ‘Real Estate Expo’ in Jaipur. Presented by CREDAI (Confederation of Real Estate Developers Association of India) Rajasthan, this 4-day expo will be organized from 8 April to 11 April at Rajmahal Palace in Jaipur. This was informed by the President of CREDAI Rajasthan, Mr Dhirendra Madan in a press conference organized at Hotel Fern on Sunday regarding the Expo. General Secretary, CREDAI Rajasthan, Mr Rajendra Singh Pachar; Chairman, CREDAI Rajasthan, Mr Anurag Sharma; Expo Convenor, Mr  Girraj Agarwal and other members were present.

Mr Dhirendra Madan further informed that this exhibition is being organized after two years of Covid hiatus to instil confidence amongst the industry as well as buyers once again. It will have stalls of builders, real estate developers and vendor associations associated with the builder industry. Due to the increase in the price of building materials at present, it is possible to increase the selling rates of flats and villas. But keeping in mind the expectations of the common consumers, the members of CREDAI will conduct booking at the old rates during the builder expo.

Mr Rajendra Singh Pachar said that CREDAI Expo is being organized to boost the real estate industry after a gap of two years due to Covid-19. The objective of the expo is not to earn profits. In fact 25 per cent of the profits from this expo will be given to ‘Apna Ghar Sanstha’ at Jamdoli under CREDAI’s CSR and it will be managed by the women wing of CREDAI, Rajasthan. He further said that for the first time in India, farms will also be sold through this expo. The expo will be attended by real estate professionals from various cities including Jodhpur, Alwar, Ajmer, and Udaipur. In this, there will be a golden opportunity for all sections of people to buy plots, flats, farms, shops, houses, etc. Mr Pachar also informed that the main sponsor for this event is FS Realty and the co-sponsor is ICICI Bank.

Mr Anurag Sharma said that the main objective of organizing this event is to showcase the strength and potential of the builder industry in Rajasthan. I am sure a large number of visitors will benefit from this expo. This property expo will give impetus to the real estate industry, which has been hit hard by Covid-19. There is an overwhelming response to this event. CREDAI Rajasthan is striving to provide a global platform and educate the new generation of developers.

Mr Girraj Agarwal informed that CREDAI members from different cities including Jaipur are also participating in the expo. We are very happy to see the response from the participants as well as those who want to attend the event. We are very excited about this expo, as it will provide an easy platform to the people who want to buy plots, flats, farms, shops, houses, etc.

On the occasion, Advisor and Director of Apna Ghar Sanstha, Mr Amitabh Kaushik, thanked CREDAI, Rajasthan for announcing cooperation with the organisation and gave detailed information about the ‘Apna Ghar’ scheme.