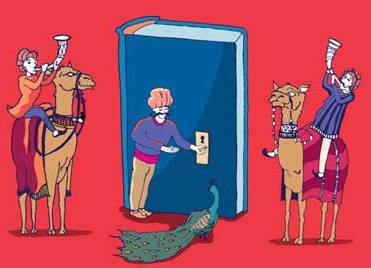 The much-awaited ZEE Jaipur Literature Festival 2018 programmeis finally out and can be found on the Festival’s website. The 11th edition of the Festival features 200 sessions spanning a multitude of topics, trends, ideas and genres ranging from fiction, poetry, nonfiction, gender, environment, science, history, liberal arts, journalism, economics, travel and cinema. The programme is a coming together of diverse literary, artistic, and discursive forms and a celebration of perspectives in Indian and global literature.

This year’s marquee sessions include British playwright Sir Tom Stoppard, winner of an Academy Award for Best Original Screenplay for Shakespeare in Love, discussing his life and work in a fascinating free-flowing session called The Real Thing; a discussion aptly titled The Great Survivor whereHamid Karzai, former President of Afghanistan, and William Dalrymple discuss his life, legacy and leadership through the country’s recent turbulent times, his views on India’s role in Afghanistan past and present and his predictions for the future of his country. In The Bridget Jones’ Diaries,novelist Helen Fielding speaks with publisher Meru Gokhale of the comic and the tragic, film and fiction and Bridget Jones’ bumpy ride to motherhood. In Conspiracy of Bones, which combines crime with popular science,Kathy Reichs, an American crime writer, forensic anthropologist, academic and producer of the TV series Bones (loosely based on Reichs’ works), speaks of her writing, popular science and communication, crime and punishment, gender and equity. Writer Akhil Sharma in a session called A Life of Adventure and Delight will bein conversation with Chandrahas Choudhury on his writing and the astonishing intensity and emotional precision he brings to his craft. In The Joy Luck Club, celebrated novelist Amy Tan will speak to SiddharthDhanvant Shanghvi about her extraordinary life and her emergence as a writer of stature against many odds. In The Art of Stillness,British-born Indian origin essayist Pico Iyer, who leads a nomadic life between a Benedictine hermitage in California, Nara in Japan and international airports around the world, speaks with writer and historian Patrick French about his life and work, movement and stillness, changelessness and change.

Attendees can look forward to spirited sessions in poetry such as Jan Nisar and KaifiwithJaved Akhtar and ShabanaAzmi in conversation with RakhshandaJalil; Girls Are Coming Out of the Woods withTishaniDoshi introduced by JeetThayil; Nude: The Poet Within in whichVishal Bhardwaj is in conversation with Sukrita Paul Kumar;and a Rajasthanibhasha session Rajasthali: DhartiRiKoonkhwith Bulaki Sharma, Abhimanyu Singh Arha and Reena Menaria in conversation with Arvind Singh Aashiya.

The programme also celebrates the diversity of languages, their enigmatic roots and multifaceted trajectories. InLokBhasha: The Oxford Dictionaries Hindi Word of the Year, the announcement of the first ever Oxford Dictionaries ‘Hindi Word of the Year’ will be made at the 2018 edition of the ZEE Jaipur Literature Festival followed by a panel discussion with Ashok Vajpeyi, Pankaj Dubey, Saurabh Dwivedi, Vinod Dua and YatindraMisra in conversation with Anu Singh Choudhary on new trends in Hindi usage and writing. In Hindi Medium: Language and Elitism, Annie Montaut, Avinash Das, Satya Vyas and SatyanandNirupamwill examine the value of Hindi, its position as a common language in a multilingual nation, a language steeped in deep literary traditions as well as one that is familiar within both popular culture and the marketplace. In a linguistic leap of faith, the session Shalom: Indian Jewish Fiction, writers Esther David and Sethu speak of ethnicity, community, belonging and the legacy of shared stories.

Intrepid reportage and commitment to bare facts makes journalistic writing a force unto itself. Exploring the many challenges and triumphs from the world of media writing, the programme features sessions like Spotlight: The Hunt for Truth where Portuguese-American journalist Michael Rezendes, who won a Pulitzer Prize for his investigative work as a member of The Boston Globe’s legendary Spotlight Team, speaks of the power of traditional and local reporting, the values, veracity and commitment required for investigative journalism as well as the changing definitions of news in the current media landscape. In Undercover in North Korea: Facts and Fictions, writer Suki Kim isin conversation with Michael Breen about her rare encounter with one of the world’s most secretive countries, North Korea, and of the privileged young men she calls ‘soldiers and slaves’.Manhunt: Pakistan and the Search for Bin Laden brings together three of the world’s greatest experts on Bin Laden. Peter Bergen, author of Manhunt, met and interviewed the man and later was the only journalist to gain access to bin Laden’s Abbottabad compound before the Pakistani government demolished it. In conversation with him are Adrian Levy and Cathy Scott-Clerk, authors of The Exile, a landmark work of investigation and reportage on the Islamic world.

Environment and climate change take new shape in River of Life, River of Death: The Ganges and India’s Future, former India correspondent for the Financial Times, Victor Mallet traces the holy river from source to mouth and from ancient times to the present day when it is choked with sewage and toxic waste. In Conflicts of Interest: Betrayals of the Earth, a session that addresses the cause and consequence of climate catastrophe, SunitaNarain, Jairam Ramesh and JeffreyGettlemanare in conversation with AmitaBaviskar. Finally, in Waters of Contention: Asian Faultlines, a session that navigates the troubled waters of political geography between India, Pakistan and China, Brahma Chellaney,Michael Buckley, Humphrey Hawksley and Manoj Joshi are in conversation with writer and journalist John Elliott.

The cinema line-up is particularly exciting with Adaptations in whichTom Stoppard, Michael Ondaatje, Vishal Bhardwaj, Nicholas Shakespeare, Mira Nair, Nandita Das and Amy Tan come together in conversation with Chiki Sarkar. In The Perils of Celebrity, Soha Ali Khan and Sharmila Tagore speak with Sanjoy K. Roy and in Mira Nair: The Personal and the Political, the indomitable filmmaker is in conversation with Vir Sanghvi.Travel writing gets fleshed out in The Travel Sessionwiththe best in the business:Redmond O’Hanlon, Hugh Thomson, Pico Iyer, Raja Shehadehand Robert Dessaix in conversation with William Dalrymple.

Bringing gender issues to the forefront and bursting feminine stereotypes have always been important programming diktats and more so this year with ‘feminism’ making it as Merriam-Webster’s ‘Word of the Year’ for 2017. Inferior: How Science Got Women Wrong takes on misogynistic stereotypes and challenges preconceptions about gender and sexual differences. Taking off from Angela Saini’s acclaimed book: Inferior: How Science Got Women Wrong and the New Research That’s Rewriting the Story, writer, columnist and feminist NamitaBhandare will be in a charged and powerful conversation with the author and theoretical physicist Lisa Randall to weave a refreshing alternative narrative about women’s bodies and minds. Another equally illuminating session, Indian Women Mystics: From the Rishikas to the Bhakti Poets delves deep into history and looks at the Rigveda in which 27 women poets had their work represented, works which are contemplative, grand and yet resonating with the pathos of the human condition. Translator Philip A. Lutgendorf will be in conversation with SwaminiAtmaprajnanandaSaraswati, author of Rishikas of the Rigveda, and ArundhathiSubramaniam, poet, author and editor of the anthology, Eating God: A Book of Bhakti Poetry.

In its 11th edition, the ZEE Jaipur Literature Festival lives up to its promise of being the grand dame of diversity, magnitude and sheer range in programming – there is something here for everyone, much to explore and to suit every literary palate!

The ZEE Jaipur Literature Festival sets literary conversations, debates and dialogue against the backdrop of built and cultural heritage including curated art installations, world music performances at the Music Stage and cultural evenings at heritage venues like the Amber Fort and Hawa Mahal.

While entry to the Festival is free and open to all, attendees can choose to purchase Festival Delegate Packages, which offer a special experience of the Festival and will take them on a compelling cultural journey. In addition to enjoying the programme, delegates get access to the Delegate Lounge, dedicated sessions, free entry to the Music Stage, invites to the special cultural evenings, official Festival merchandise, lunches and dinners with authors and fellow delegates, a cocktail evening and much more.

About the ZEE Jaipur Literature Festival 2018

Described as the ‘greatest literary show on Earth’ and the ‘Kumbh of literature’, the ZEE Jaipur Literature Festival is a sumptuous feast of ideas.

The past decade has seen it transform into a global literary phenomenon having hosted nearly 2000 speakers and welcoming over a million booklovers from across India and the globe.

Every year, the Festival brings together a diverse mix of the world’s greatest writers, thinkers, humanitarians, politicians, business leaders, sports people and entertainers on one stage to champion the freedom to express and engage in thoughtful debate and dialogue.

The Festival showcases a range of voices from India and abroad.

The ZEE Jaipur Literature Festival is a flagship event of Teamwork Arts, which produces it along with over 25 highly acclaimed performing arts, visual arts and literary festivals across more than 40 cities globally.

In 2014, the Festival spread its wings beyond the borders of India with an annual summer event in London. In 2015, it headed across the pond to Boulder, Colorado where it hosts a similar event every September.

Teamwork Arts produces one of the world’s largest literary gatherings, the annual ZEE Jaipur Literature Festival, the Ishara International Puppet Festival and the annual Mahindra Excellence in Theatre Awards (META) and Festival in New Delhi, international festivals Shared History in South Africa, Eye on India in the United States of America, India by the Bay in Hong Kong, Confluence – Festival of India in Australia,  India@70 2017: Year of Culture in the United Kingdom, and many more.