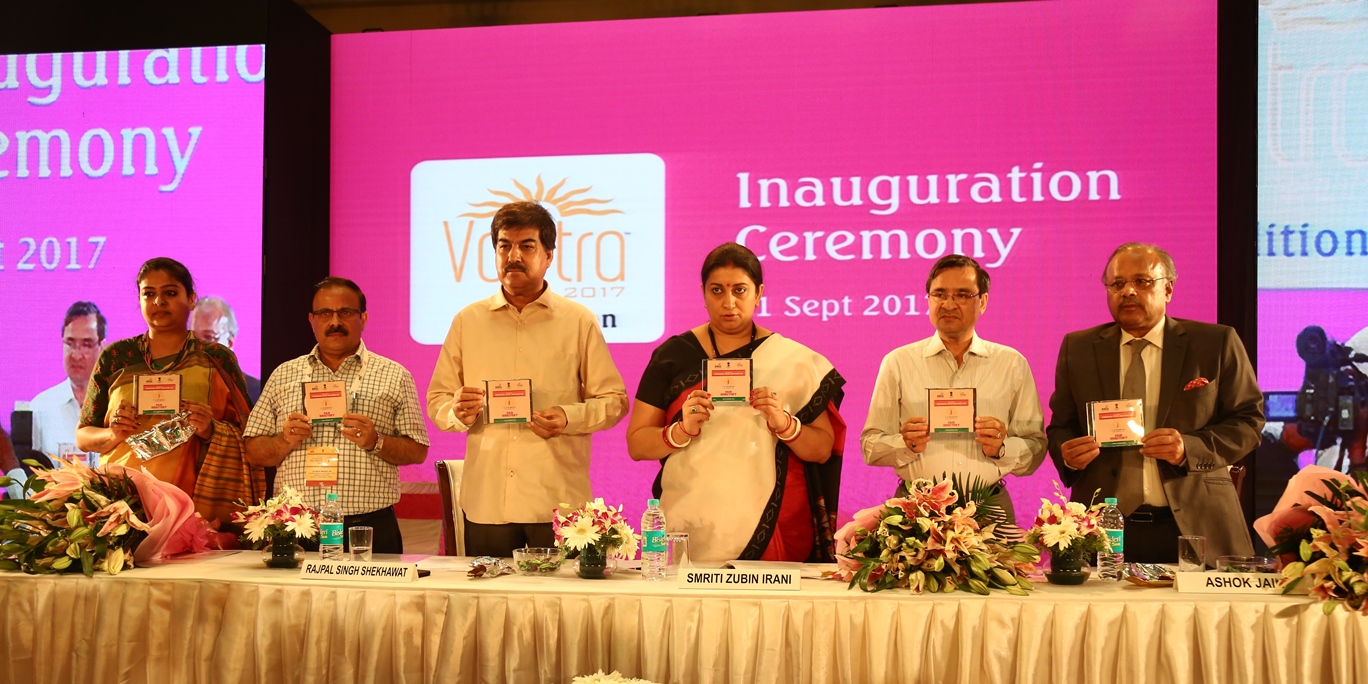 Textile industry in the country is growing exponentially with the Foreign Direct Investment (FDI) having tripled in 3 years. It has touched the figure of USD 618.95 million in 2016-17. However, there is still a huge potential for further growth in the sector for which multifarious efforts are being made by the Centre as well as different States. This was stated by the Chief Guest, Union Textiles & Information and Broadcasting Minister, Smt. Smriti Zubin Irani today. She was speaking at the Inaugural Ceremony of the 6th Edition of the 4-day International Textile and Apparel Fair, ‘Vastra’ at the Sitapura based Jaipur Exhibition and Convention Centre (JECC) in Jaipur.

‘Vastra 2017’ has been jointly organised by Rajasthan State Industrial Development and Investment Corporation Ltd. (RIICO) and Federation of Indian Chamber of Commerce and Industry (FICCI), VASTRA has created a niche for itself in textiles and apparel industry since its inception in 2012. The event is also supported by the Government of Rajasthan.

The Union Minister further stated that the textile sector employs the 2nd largest workforce in the industry with 45 million Indians directly and 20 million Indians being indirectly employed. However, concerted efforts are being made for creating further avenues by living up to the Prime Minister’s vision of ‘Make in India’. The Government is providing skilling opportunities as well as incentives to give an impetus to the industry. The financial support to the weavers under the ‘Mudra Yojna’ has documented evidence of increase in income of the weaver to the tune of 50-60%.

Ms. Irani appreciated the efforts of the State Government in making Rajasthan a garment hub. She said that the Jaipur Designers Festival which is being held in the ‘Vastra’ for the first time will go a long way in providing an opportunity to the younger generation by providing them an exposure to the world of fashion and designing. She also appreciated that a  ‘Sari Draping Workshop’ is being organized during Vastra. The audience of the workshop will get an opportunity to revisit ethnic Indian women clothing through this workshop.

On the occasion, Rajasthan Industries Minister, Mr. Rajpal Singh Shekhawat said that Rajasthan is a prominent textile destination in the country. Textile industry of Rajasthan is present across the entire textile value addition chain – from spinning to garments and made-ups. Availability of forward and backward linkages in textile industries of Rajasthan offer significant competitive advantages. He further added that, Rajasthan, perhaps, is the only State in the country that organizes trade fairs for the benefit of the entire industry. He further highlighted that Rajasthan enjoys leading position in production of polyester viscose yarn and synthetic suiting material.

A Fair Directory was also unveiled by the Union Textile Minister and other dignitaries on the dais.

The Chief Secretary, Government of Rajasthan, Mr. Ashok Jain said that garment industry has its own importance. While the value addition and employment generation in this segment is high, the capital required is comparatively low. Promoting garment industry in Rajasthan is all the more important from the point that it is less water consuming. He further added that the garment industry is also a useful tool to leverage women empowerment as they constitute majority of the workforce in this segment.

Additional Chief Secretary Industries, Government of Rajasthan and Chairman RIICO, Mr. Rajeeva Swarup highlighted the 3 objectives of ‘Vastra – 2017’. He said that the event will provide an opportunity for the students of textile and fashion institutes as well as fashion designers and exhibitors to interact with the leaders from the fashion and design industry. Secondly, Vastra will serve as a platform not only for discovering new trends in textiles but also for learning from the many international buyers who will be participating in the event. Thirdly, the event will showcase Rajasthan as an attractive investment destination for setting up manufacturing units.

Earlier, the Managing Director, Ms. Mugdha Sinha gave the welcome address and report on ‘Vastra 2017’. She said that this year in Vastra there are over 250 exhibitors from 13 States, around 300 overseas buyers from more than 50 countries and about 200 representatives from around 100 Indian Buying Houses/Agents. Over the past few years, VASTRA has played a pivotal role in creating a roadmap of growth for the entire textile and apparel industry of India.

The vote of thanks was proposed by the Chairman, FICCI Textiles Committee, Mr. Shishir Jaipuria. He said Rajasthan is an important textile destination and besides being a sourcing hub for manufacturing it is also emerging as a garment hub.