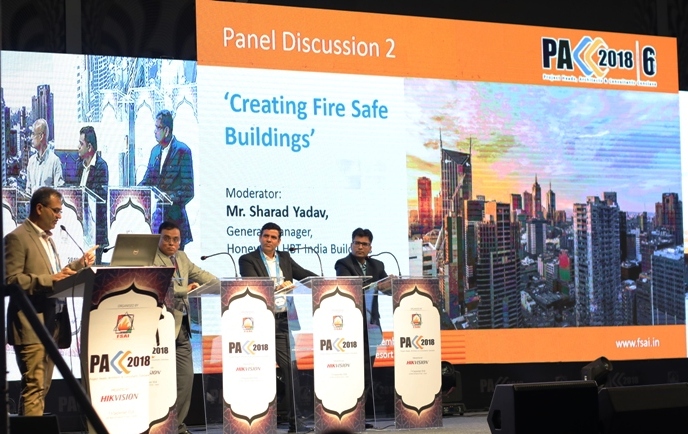 “AWARENESS FOR FOLLOWING NBC 2016 NEEDS TO BE PERCOLATED DOWN TO THE ARCHITECTS, DEVELOPERS AND CONSULTANTS”

People need to stop interpreting the India National Building Code 2016 (NBC 2016) as per their own wisdom. There is a need for self-education and creating awareness which can be percolated down to the architects, designers, consultants and developers. India also needs to work with international societies and adopt best-seen practices. This was stated by Chairman, PACC 2018, Mr. Pankaj R. Dharkar. He was speaking on the second day of Project Heads, Architects and Consultants Conclave (PACC 2018) organised by Fire & Security Association of India (FSAI) held at Hotel JW Marriott in Jaipur on Saturday.

Architect, Jitendra Mehta said we need to ensure proper integration of our education system especially in fields of architecture and engineering. MEP Consultant, Shrestha Consultants, Mr. Sudhir Mathur said that most clients understand the need for implementing fire safety measures in their buildings. However, when they begin to go over budget they start to cut things short.

Earlier there was a session on ‘Creating Fire Safety Buildings’ which focused on developing fire safe buildings in the face of rapid urbanisation and modernisation. Technical Director- Life Safety, DesignTree Service Consultants, Mr. Prashant Gururaj said that we need to focus on creating safe exists and staircase for speedier evacuations and reduce the potential effect of the fire.

Speaking about budgets MD CEO, Firepro, Mr. M.C. Muthanna said that the consultants usually come on board a project when it is already over-budget and under huge pressure to be made safe at minimal costs. President, Good Governance India Foundation, Mr. V. Suresh said that frameworks should be created keeping in mind the Indian context.

Defence and security specialist, Mr. Maroof Raza said that the most glaring challenges in security measures implemented in India are— the excessive number of people in public spaces, numerous entry-exit points and various viewpoints during a crisis situation. Majority of existing security systems in the country are tedious and uninformed.

It is to be recalled that the 3-day event is being attended by around 550 people who are renowned architects are consultants, top technocrats as well as fire, safety and security professionals across India.