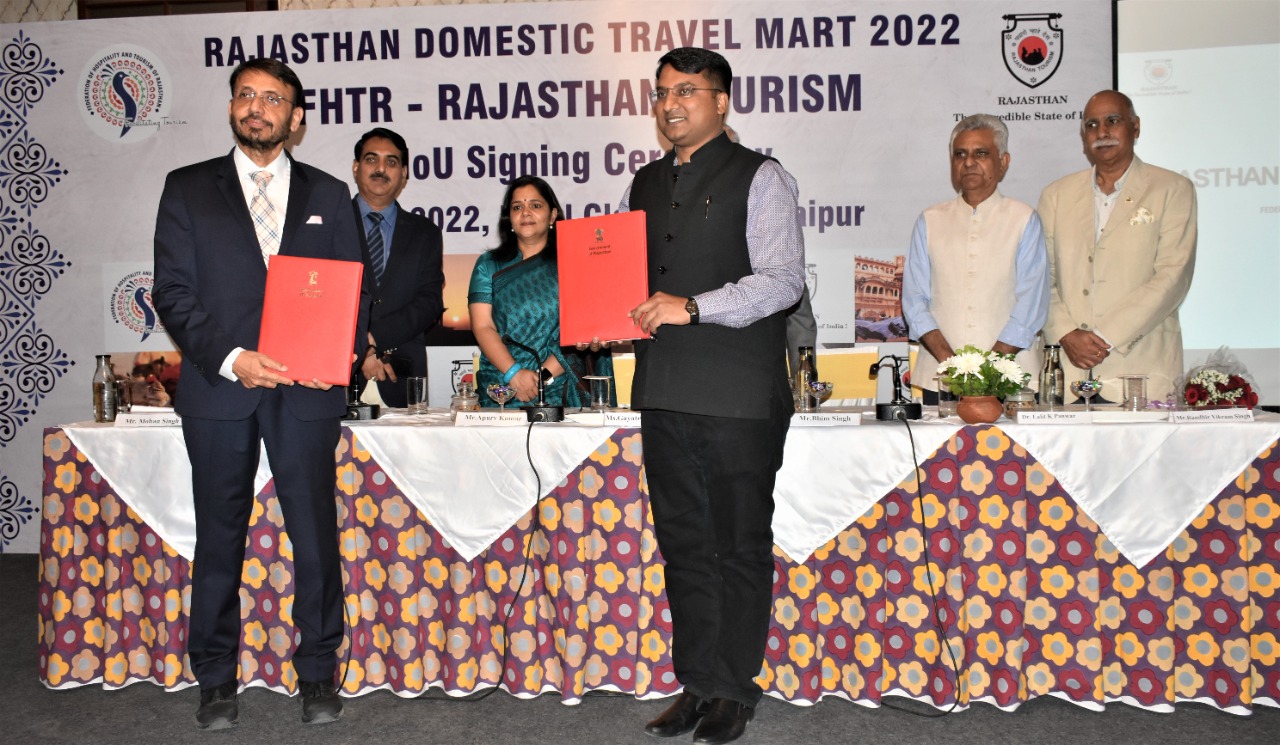 Ms Rathore was speaking on the occasion of the signing of the Memorandum of Understanding (MoU) between the Department of Tourism (DOT), Government of Rajasthan and the Federation of Hospitality and Tourism of Rajasthan (FHTR) for organising the ‘Rajasthan Domestic Travel Mart (RDTM) 2022’. The ceremony took place at Hotel Clarks Amer in Jaipur.

The PST further said that the ‘RDTM 2022’ will play a significant role in boosting the domestic tourist arrivals in Rajasthan with the opening up after the Covid conditions. The tourist arrivals to the State have already increased as have foreign tourist arrivals with the opening up of the international flights. She further said that tourism contributes 9 per cent to the State’s economy and is responsible for providing directly and indirectly 50 lakh jobs. It is only appropriate that the Government has accorded high priority to the sector and the tourism-friendly budget which was declared recently. She said she considered FHTR, Rajasthan Association of Tour Operators (RATO), Indian Heritage Hotels Association (IHHA), Hotel & Restaurant Association of Rajasthan (HRAR), etc. as partners of DOT in promoting this sector. She said that a large number of policies are on the anvil which will promote tourism in a big way. Among these policies are New Tourism Unit Policy, Home Stay Policy, Rural Tourism Policy, Heritage Scheme, and the full Tourism Policy.

Rajasthan Tourism will join hands with FHTR to organize pre-event road shows in different parts of the country. District level investment meets will also be held for attracting the investment in the tourism sector.

Later, the MoU was signed between the Director of Tourism, Government of Rajasthan, Mr Nishant Jain and President of FHTR, Mr Apurv Kumar in the presence of the Principal Secretary of Tourism, Ms Gayatri A. Rathore for the RDTM 2022 and the documents exchanged. The Travel Mart is slated to be held from 22 to 24 July.

On the occasion, President FHTR, Mr Apurv Kumar said that now that things are once again opening up with Covid taking a backseat, the Federation in collaboration with the State Government is ready to bring back the much-awaited RDTM. The Mart will bring hospitality operators from the State of Rajasthan and major operators and influencers of tourism from different cities/states under one roof, through B2B meetings. It will also inform and create awareness among the potential buyers of the particular features of the exhibiting hotel, resorts as well as tour operations in different aspects. “The State Government has been generous in providing a very good budget to the tourism and hospitality industry. The tourism sector has also been declared an industry. It has received the benefits of the industry status which was long pending since 1989. This has given a huge boost to tourism”, he said.

The Patron of FHTR and former Director Tourism, Government of India, Mr Lalit K. Panwar also applauded the State Government for the tourism-friendly budget. He suggested a few new taglines for the Department. President Honour, FHTR, Mr Bhim Singh also looked forward to working with the Department. The welcome address was delivered by Secretary General, FHTR, Mr Mohan Singh Mertiya and vote of thanks was proposed by President of RATO, Mr Kuldeep Singh Chandela. Also, present on the occasion were members of FHTR.