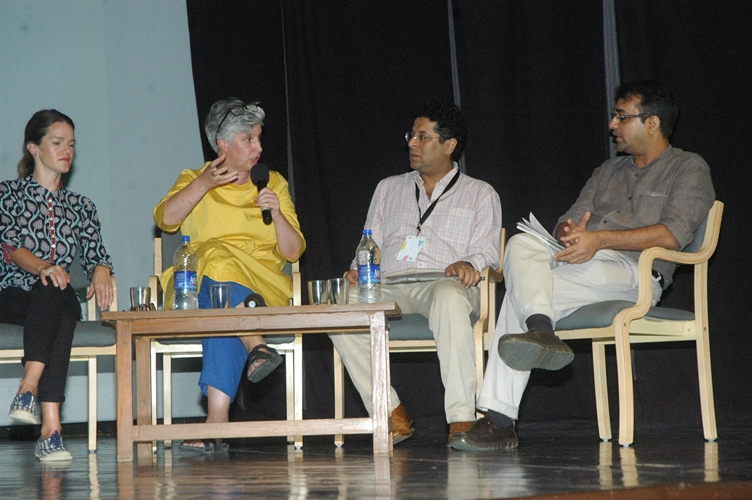 Aimed at discussing the ceramic discoveries around the world by mapping of trade routes and technological influence on clay and ceramics, the concluding day of the symposium was held at Rangayan of Jawahar Kala Kendra (JKK) on Sunday. The symposium was held as a part of the first Indian Ceramics Triennale ‘Breaking Ground’. The event was organized in collaboration with the Contemporary Clay Foundation.

Examining scientific, medical and socio-historic themes, Ms. Essen said that possibilities in ceramics are endless. She also discussed in-depth  projects undertaken with Medical Museum London and Kings College London to depict pieces that explore anatomy and form to provoke emotions of ease, disease and unease amongst the viewers. Her pieces took inspiration from medical conditions like acne, osteoporosis, psoriasis, cancer, among others.

Analysing the significant impact of technology on the changing scope and scene of arts, Mr. Ahuja said that the history of Indian ceramics is inter-connect with the rest of the world and has absorbed practices from Rome, Greece, Balochistan etc. He also showed photographed pieces from neolithic and Harappan sites.

Ms. Murphy focused on her practice which fluctuated between the real world and the digital realm. She also discussed applications of digital technology to ceramics. Her works reflected her interest in infusing historical objects with contemporary context.

Summarising the various threads explored at the symposium during the Triennale, Ms. Gers said that the future of ceramics is in developing sustainable practices for the future generation.  There is a need to create ethical foundation that focuses on building economically and environmentally.

On the occasion the vote of thanks was delivered by Additional Director General (Tech), JKK, Ms. Anuradha Singh.

The evening concluded with book launch of – Building with Fire by Ray Meeker published by CEPT University Press.

The book explores, first and foremost, a technique where fire is introduced into the construction process as cement for bonding building elements together permanently and creates a water-resistant structure. Building with fire also suggests the passion with which these experiments have been undertaken and the element of risk involved in the process.

Documenting the construction and firing of one of Ray’s projects, a film called – ‘Agni Jata’ was also screened on the occasion.