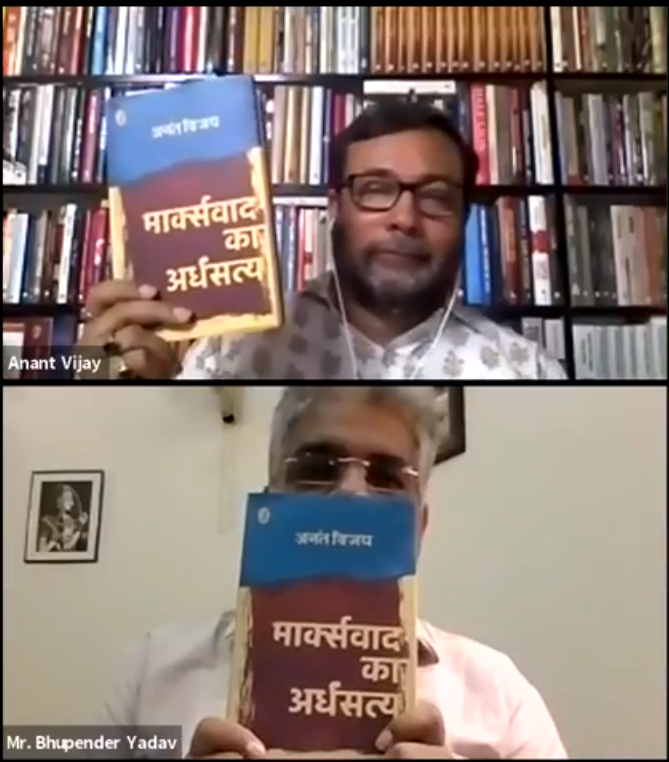 India needs dialogue and not argumentative Indians said author Anant Vijay while discussing his latest book “Marxwad ka Ardhsatya” at the Kitaab book launch event organized by Prabha Khaitan Foundation from Kolkata. Vijay’s latest book is a scathing jeremiad on the double standards of Marxists, who, he says, “they never practice what they preach.”

Eminent litterateurs, scholars, book lovers, students and journalists from across the country joined online for an engaging hour-long session with the author who was in conversation with senior journalist Bishambhar Newar. Chief Guest Sri Bhupendra Yadav, Rajya Sabha MP, flagged off the session saying, “Anant’s book helps us confront the truth about Marxists and see facts from close quarters. While Marxists use poverty as a means to gain power, eliminating poverty is never on their agenda.”

Clarifying that his book, based on 12 years of research and case studies, is not against Marxism but against the Marxists who are rank opportunists driven by selfish motives and scant consideration of the wishes of the people whose cause they claim to espouse. “Money and power is the summum bonnum of Marxists and the egalitarian concepts they tomtom are hollow and vacuous,” he said.

“My book is more about Marxists and their double standards and not against Marxism as such. The only point I raise against Marxism is that there is no mention of environment anywhere in the whole treatise. This, I think, is a major oversight of Marxism,” Vijay said, responding to a question.

The author, who is the managing trustee of  Kalamkar Foundation which works on Indian languages, sounded a cautionary note, “Though people have rejected Marxism across the world but ideologies don’t die. They may run out of followers. However, the Marxists are phoenix-like, always ready to rise, subvert and dominate.”

“Anant Vijay’s book is a culmination of deep research and provides and alternative view of Marxists. His scathing and seemingly rock-ribbed views of Marxists is amply backed by case studies which he presents with a candour verging on gusto. His meticulous approach to the subject is a testimony of his journalistic skills,” said Sundeep Bhutoria of Prabha Khaitan Foundation.

The author touched upon the dubious global agenda of China, Xi Xinping, the secret lives of Mao and Fidel Castro and so onto drive home his argument thatMarxists in action causing an infinity of sufferings to further their selfish ends. Taking a dig at the so called “progressive writers”, Vijay said, “What kind of progress it is that drives you away from your nation’s heritage.”