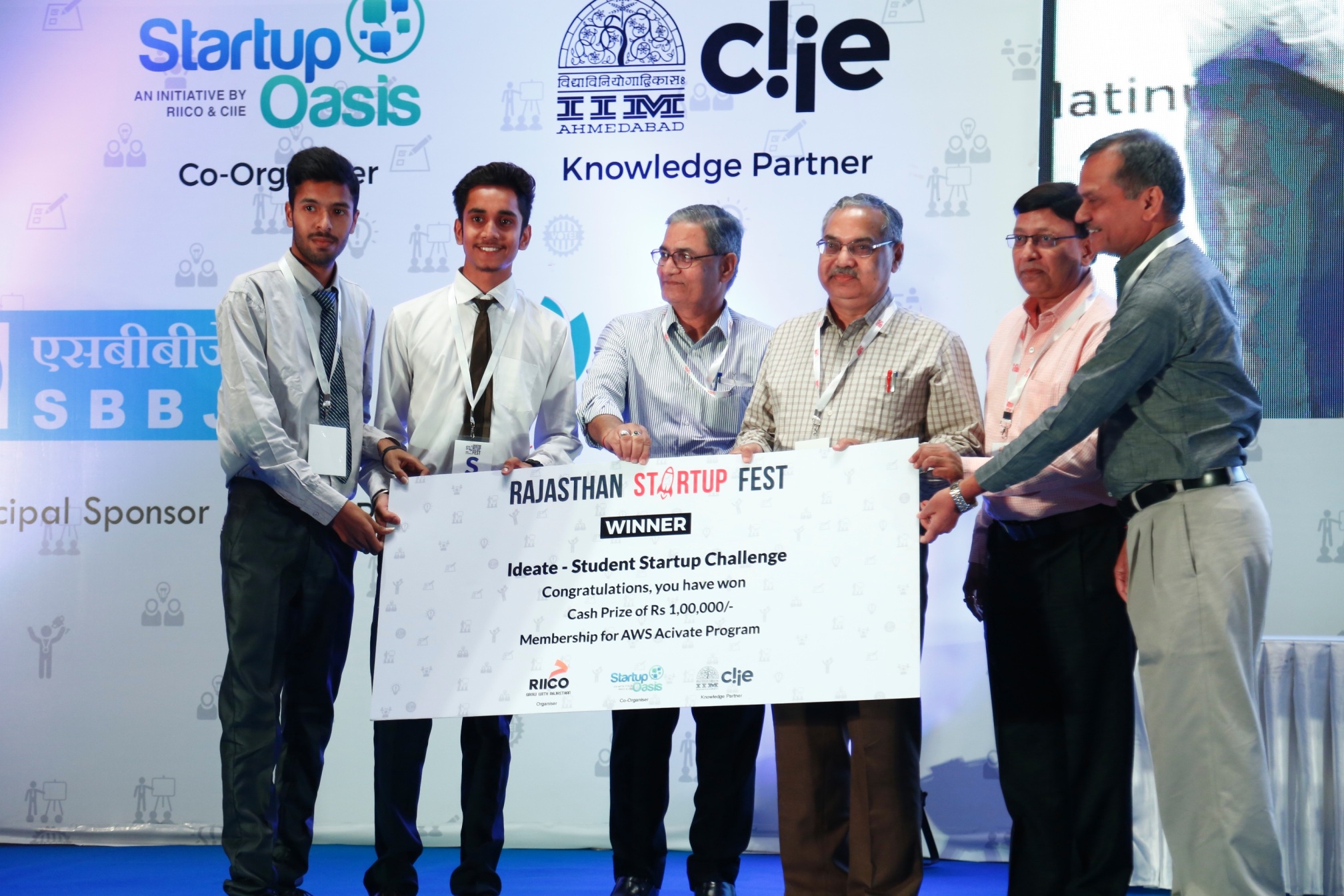 Ideate Student Startup Challenge was a programme organized exclusively for students by StartupOasis. Over a period of two months, 175 applications from across the State were received for the programme. Top 10 teams selected were taken through a mentoring programme. These teams presented their final pitches during the Rajasthan Startup Fest and the top 3 teams were announced during the valedictory ceremony today.

The first prize of Rs. 1,00,000 was won by Wrapper Picker by the students of Global Institute of Technology, Jaipur. Wrapper Picker helps to pick wrappers and plastics using roller mechanism. The second prize of Rs 75,000 went to HiBuddy by the students of Vivekanand Global University and Malviya National Institute of Technology, Jaipur. HiBuddy is an advertising cum manufacturing company with an objective of promoting brands through notebooks at lesser costs and offers. The third prize of Rs. 50,000 was given to CabDay Technologies by the students of LNMIIT, Jaipur. CabDay Technologies us a shuttle service that resolves commuting problems within a city at lower costs.

Earlier during the day a disruptive talk session was organized where Angad Nadkarni of CTO Hullo Inc., Prasoon Gupta of Sattviko, Harshil Mathur of Razorpay and Ankit Kwatra of Feeding India spoke in length about the journey of their successful businesses.

A panel discussion on ‘Advantages and Challenges of Building a Startup in Jaipur’ featured stories of successful Jaipur-based Startups and startups owned by Jaipur based entrepreneurs. Present during the session were Vishwas Shringi of Voylla.com, Rishab Jain of Qriyo, Rahul Garg of Lifecare.

An interactive sessions on woman entrepreneurship saw speakers like – Mamta Singh of Thalagiri, Pooja Sareen of Inc42, Chitra Guranani Daga of Thrillophillia, Anuradha Agarwal of Multibhashi and Aditi Chaurasia of Engineer Babu narrating their experiences regarding the challenges they faced while raising funds for their startups and getting their startups established.

MELA an interesting session on music, entertainment, literature and art organized by Jaipur Mera Shehar also received huge appreciation at the fest. During the session, the audience tapped to the drums played by Harish Choudhary of Taal Inc. Vineet Sharma of Jaipur Walks also narrated the evolution of ‘Jaipur Walks’ which offers a city tour in categories like heritage religious and bazar during the MELA session.

It is to be recalled that the national-level two-day fest was organized by Rajasthan State Industrial Development and Investment Corporation (RIICO) along with Rajasthan’s leading incubation center, Startup Oasis as a co-organizer at Sitapura-based Jaipur Exhibition and Convention Centre. CIIE at IIM Ahmedabad also joined hands as knowledge partner for the event.