In Rajasthan, one feels the echo of Mirabai and other Sufi poets: Dr. Tara Gandhi Bhattacharjee 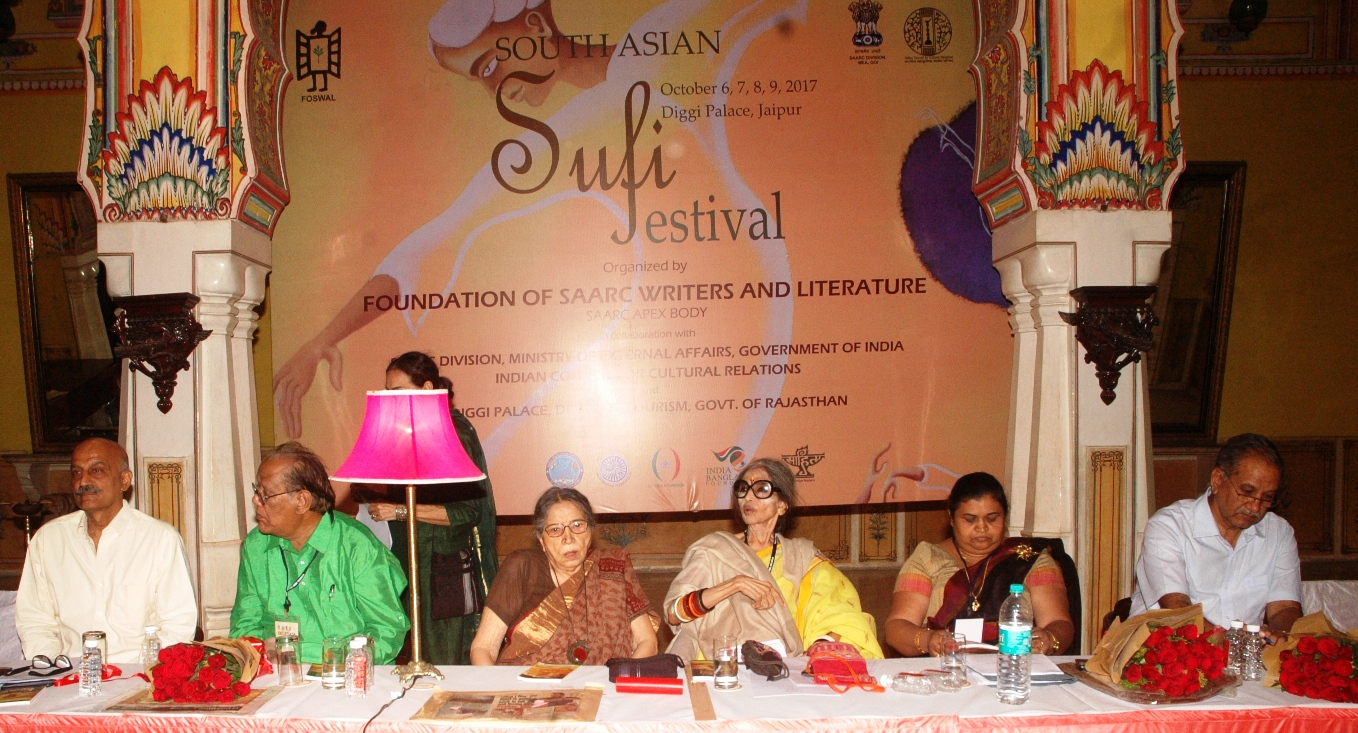 In Rajasthan, one feels the echo of Mirabai and other Sufi poets: Dr. Tara Gandhi Bhattacharjee

There isn’t much difference in the spirit of the Pakistani folk singer Reshma and the mystic poet Mirabai, whose devotional poetry resounds in the various corners of Rajasthan. With these thoughts, Dr Tara Gandhi Bhattacharjee, grand-daughter of Mahatma Gandhi and trustee of Kasturba Gandhi National Memorial Trust, opened the 5th South Asian Sufi Fest at Diggi Palace in Jaipur on 6 October.

“It is a beautiful conference with the participation of various countries and the people of Rajasthan, in the magical and beautiful city of Jaipur. It is here that one feels the echo of Mirabai and other Sufi poets. I also think of Reshma. I don’t think there’s much difference in the echo of Reshma and the spirit of Mirabai,” said Bhattacharjee referring to the ideas of Sufism, while speaking as Chief Guest in the inaugural session of the 3-day festival.

Addressing the FOSWAL president Padmashri Ajeet Cour, Bhattacharjee said that the conference always inspires her to learn more about the divine tradition of Sufi and look within. “There is no way we can say that Sufi doesn’t belong to us. When I went looking for Sufi, I realised I was like the musk deer running through the forest to look for the source of the divine fragrance, which he had felt. The deer is unconscious that the source of the divine perfume is within him,” she said, addressing the gathering of scholars, poets and writers.

Relating to the Sufi journey as ‘atma-darshan’, or discovery of the self, Bhattacharjee also spoke of the beliefs of her grandfather. She explained that the concept was relatable to Gandhi because there was a Sufi in him, even though he never spoke about it. She also talked about the time she had spent with Mahatma Gandhi, until she turned 14. Responding to media queries on the sidelines of the conference, she said that the principle of ‘cleanliness’ attributed to Gandhi includes clean surroundings as well as clean thinking. “The Ganga is not polluted, but our mindset is. We have polluted clean cities of our country,” she added. During her address, Bhattacharjee said that not just governments, but citizens should also feel responsible for their country.

Delivering the inaugural address, Cour earlier said that FOSWAL is the only SAARC apex body in eight SAARC countries that is responsible for literary and cultural programmes across SAARC nations, under the SAARC banner and SAARC logo, “Our focus has been especially on subjects that bind our region culturally, give deep understanding of life and beyond, love and compassion, reconciliation and understanding and the otherness of the others,” she said. “One can be a Muslim, Hindu, Sikh, Christian, Jew, yet be a Sufi too, because Sufism is an exalted state of mind where love and peace prevails burg a new ideological state of mind overflowing with love,” she added.

Later, answering questions from the media on the absence of Pakistan delegates for two consecutive years, Cour said it was a political matter and nothing to do with the conference.

In his presidential address, the host Ram Pratap Diggi said that he felt humble in the presence of eminent people attending the fest. “We constantly endeavour to provide a platform and space where people like you can gather,” he said. On the relevance of the Sufi festival, he added, “Each country has its problems and every human being is now realising that the answer lies in existing in harmony and believing in Sufism.”

Jaipur Mayor Ashok Lahoti invited the audience to explore the Pink City, which was built as a great example of planning and architecture. He mooted the idea of a Sufi night during Jaipur’s Foundation Day celebrations to acquaint youth with the principles of Sufism.

Ms P Anusha Gokula Fernando, Director of the Department of Cultural Affairs in Sri Lanka, spoke about the work being done by her department and participation of Sri Lankan artistes in the FOSWAL Sufi fest. “If we think about it, we can change the world with art and culture,” she added.

Professor RS Khangarot, Principal of Agrawal College, which hosted the cultural evening on the opening day, welcomed all participants to attend the programme.

The festival is being organised by the Foundation of SAARC Writers and Literature (FOSWAL), an apex body of SAARC, in collaboration with Diggi Palace and Ministry of External Affairs. The fest is supported by the Department of Tourism, Rajasthan.