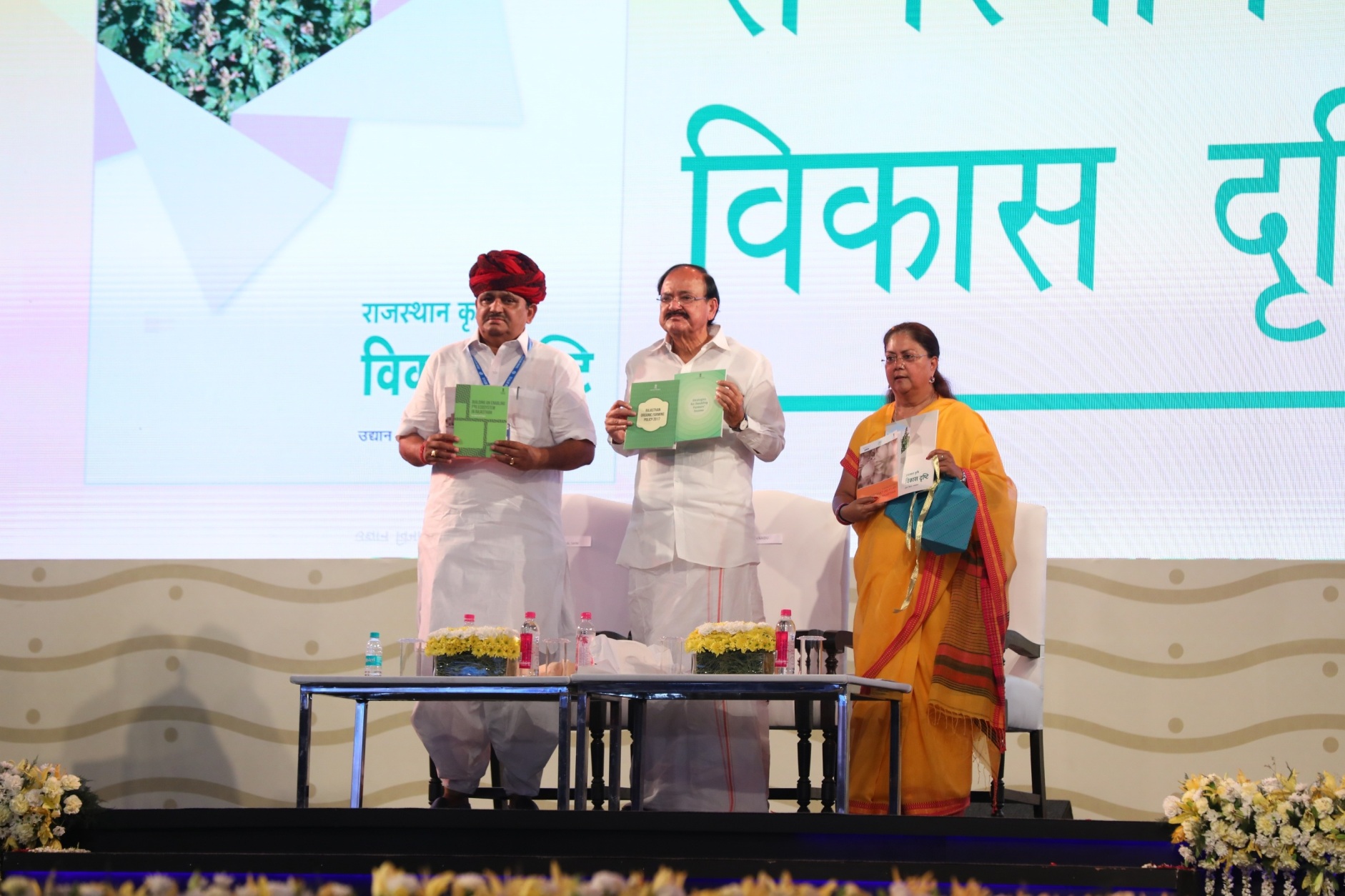 Kota, 24 May: There is an essential need to provide power access to farmers 24 X 7 and the State Government should work progressively in this direction. This was stated today by the Union Minister of Urban Development, Housing Urban Poverty Alleviation & Information and Broadcasting, Shri M. Venkaiah Naidu today at the inaugural session of the Global Rajasthan Agritech Meet (GRAM) in Kota. He further said that the Central Government is making an earnest effort to provide electricity in the villages as well. This will enable the empowerment of the women, farmers, middle classes and the youth in the villages.

GRAM Kota is being held from 24 to 26 May at Kota in Rajasthan. The event is being jointly organised by the Government of Rajasthan and Federation of Indian Chambers of Commerce & Industry (FICCI).

The Union Minister further emphasized on the need for diversification of crops as the only way forward for the progress of the agriculture sector and in turn the nation. Apart from this, organic farming, processing, cold storage chains, development, post harvesting as well as should also be given adequate attention. This will also check the migration of farmers from agriculture to other sectors. He also said that Government should focus on the 4 ‘I’ for the well being of the farmers — Irrigation, Infrastructure, Interest Rate and Insurance.

Shri Naidu also reiterated the fact that the Central Government is committed to achieve the Prime Minister’s mission of doubling farmers’ income by 2022 and GRAM being the one of its kind agri event in the country, is a significant step in this direction.

Highlighting the achievements of the GRAM held in Jaipur in November 2016, the Chief Minister of Rajasthan, Smt. Vasundhara Raje said that the event in November saw for the first time since independence, the participation of representatives of several countries like Nigeria, Australia, Tajikistan, Israel, Japan, Netherlands, UK, Serbia, Kazakhstan and World Bank. As many as 38 MoUs worth Rs. 4,400 crores were signed in the event.

The Chief Minister further added that the prime objective of GRAM is to ensure the self reliance of farmers. This will be possible only when the farmers will increase productivity with the use of modern technology and cultivate crops as per market demand. The CM also announced that if a farmer will setup a processing unit in his farm the Government will provide 50% subsidy on a minimum  investment of Rs. 40 Lakhs. She also urged the farmers to earmark an area in their farms solely for organic farming.

The Malaysian High Commissioner in India, Mr. Hidayat Bin Abdul Hamid said that Malaysia and India have always enjoyed warm and friendly bi-lateral relations with each other. He hoped for the participation of Malaysia in the fast-economic progress of Rajasthan and identify key areas for investment in the State. He further stressed on the need for the new generations to be focused on agriculture sector for a holistic development.  Malaysia is the partner country for the event.

Agriculture Minister, Government of Rajasthan, Mr. Prabhu Lal Saini in his welcome address highlighted the agricultural strengths of the Kota division.  He said that under the able leadership of Chief Minister, the contribution of farmers of the State is being recognized and appreciated.   He also emphasised that the annual per capita income of farmers in the State has increased significantly from Rs. 64,000 to Rs. 88,000 due to the proactive efforts of the Government.

Principal Secretary, Agriculture, Government of Rajasthan, Smt. Neelkamal Darbari said that the 3-day mega agro-event has been designed with 4 focus areas in mind – warehousing, optimum water utilization, empowerment of women and workforce training. She highlighted the crop diversification initiatives taken by the region in areas of date, quinoa, olive, dragon fruit and pomegranate. Smt. Darbari further added that there lies huge scope of investment in areas of post-harvest processing, agri-tourism, custom hiring centres, among others.

Earlier on the occasion, inaugurations of GRAM Exhibition and Renovations of Dusshera Grounds were done through a remote button from the stage by Mr. Naidu and Smt. Raje.

FICCI Rajasthan State Council & CMD, Kajaria Ceramics Ltd., Mr. Ashok Kajaria proposed a vote of thanks at the end of the inaugural programme.

Opening ceremony begun with a cultural extravagant and lighting of the lamp.

The Chairman of YES Global Institute and MD & CEO, YES BANK, Mr. Rana Kapoor said that it is heartening to note that the Rajasthan State Government has been driving the agenda for doubling farmers incomes by 2022 and has planned various interventions to achieve this goal. The State has made commendable efforts to foster growth in the agricultural sector and has been at the forefront of promoting investments, reviewing policies, bringing transformational reforms and establishing adequate infrastructure. YES BANK is proud to be associated with the first Regional edition of Global Rajasthan Agritech Meet (GRAM) being held during May 24-26 at Kota where YES Global Institute-Government of Rajasthan-FICCI joint knowledge series ‘Horticulture Atlas of Rajasthan’, which provides an overview of the horticultural landscape of the state, is released.