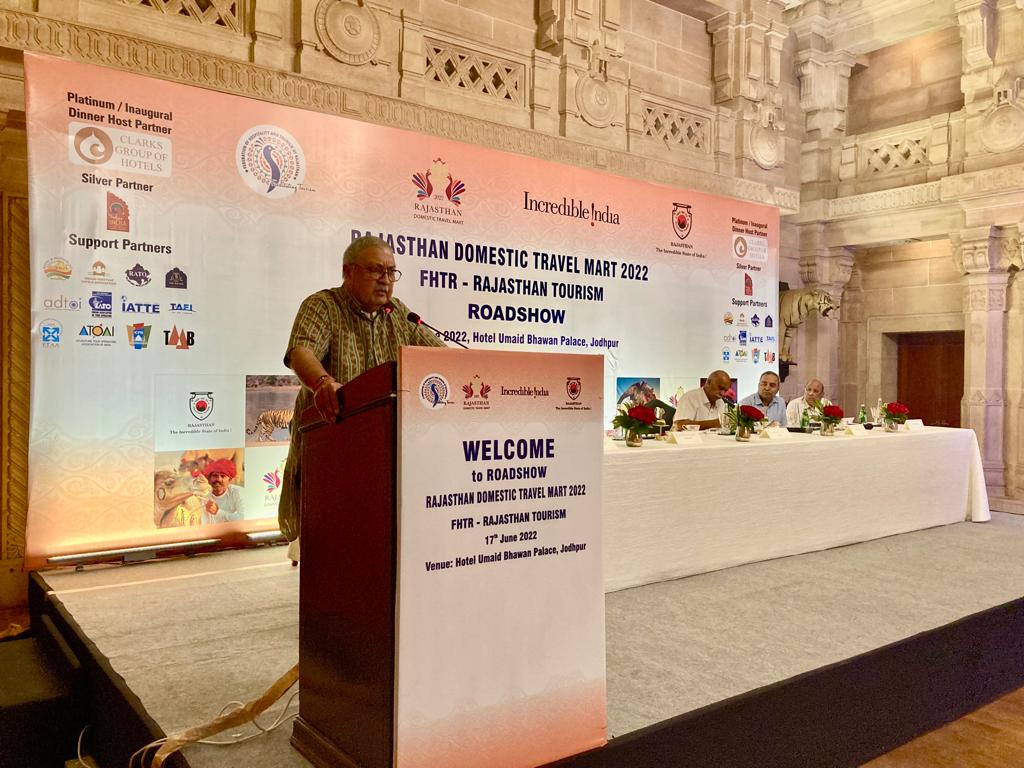 Domestic tourism is an important mantra for the success for the tourism industry. This is because it will take time for the international tourists to come to India as they used to in the past. In this present situation of uncertainty, post-pandemic, there is no surety when international tourism will regain its full gusto. In this scenario, therefore, the stakeholders have rightly turned to domestic tourism. This was stated by President Emeritus, Indian Heritage Hotels Association (IHHA), Gaj Singh Jodhpur. He was addressing the tourism and hospitality fraternity at the third pre-event roadshow at the Umaid Bhawan Palace in Jodhpur. This promotional roadshow was held for the scheduled Rajasthan Domestic Travel Mart (RDTM) 2022. It was jointly organized by the Department of Tourism and the Federation of Hospitality and Tourism in Rajasthan (FHTR). Also, present on the occasion were – President, FHTR, Mr Apurv Kumar and President, IHHA, Mr Randhir Vikram Singh.  On behalf of the Department of Tourism, a presentation was given by the Joint Director, Mr Pawan Jain who outlined the new initiatives by the Government. Films on World Heritage Sites in Rajasthan and Cuisines of Rajasthan were screened. Several potential buyers and sellers for RDTM also attended the roadshow. Around 100 stakeholders were present on the occasion.

President, FHTR, Mr Apurv Kumar said that tourism, one of the largest industries of Rajasthan, has taken a major dip of more than 70% in 2020 due to the Covid-19 pandemic. Post-pandemic, as the world returns to normalcy, there is a need to once again promote Rajasthan and revive tourism, together. It is not the sole responsibility of the Government alone to promote the State. As members of the travel and tourism industry, each one has a significant role to play in this area because public-private partnerships are the way to revive the industry. Towards this aim, the Department of Tourism and FHTR is organising the second edition of RDTM 2022 which will serve as a common platform for interaction, understanding, and business generation for the associated travel partners. It will bring tour operators and influencers of tourism from India through B2B meetings under one roof. Various promotional activities are also being organized, including road shows across the State to make the event a success.