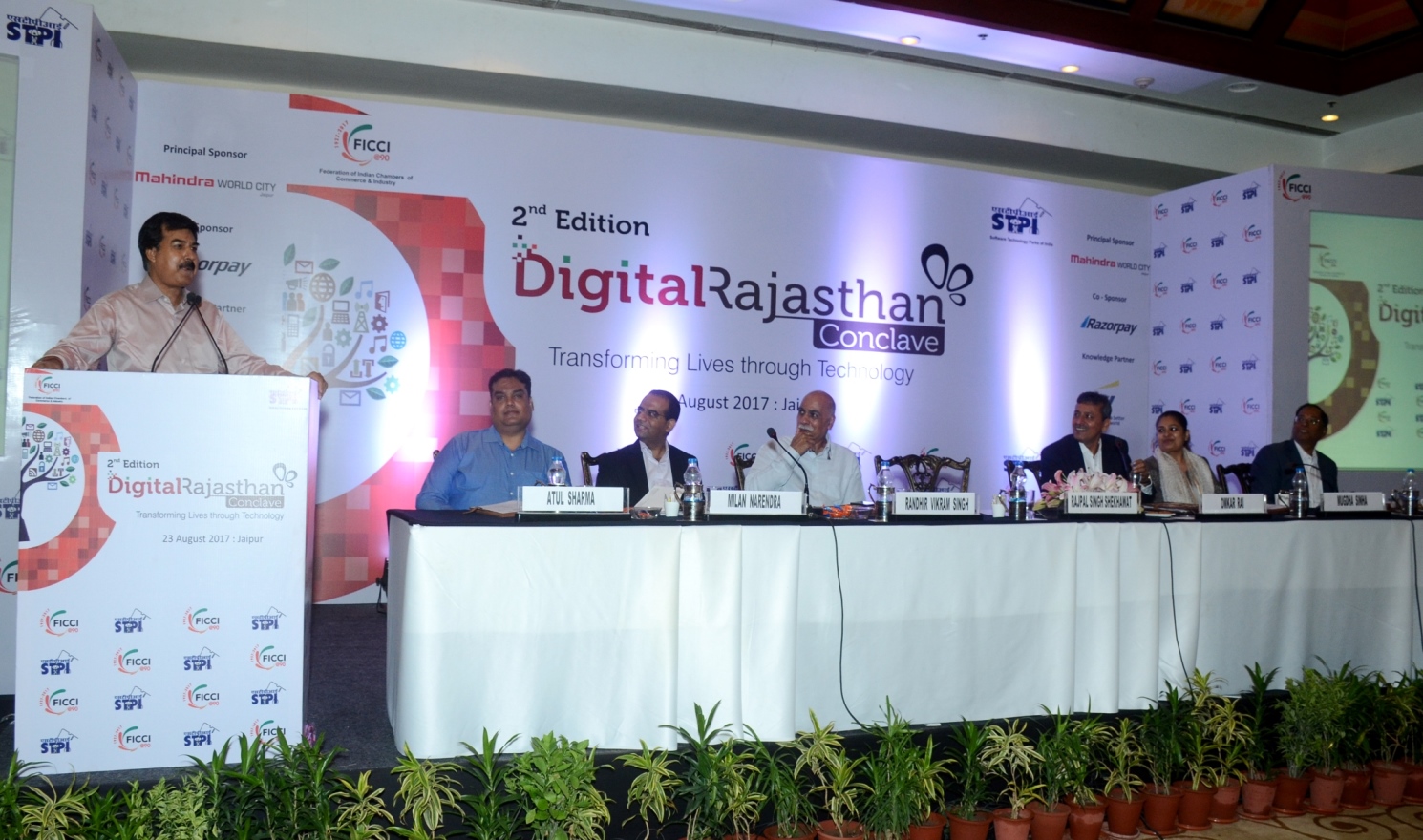 Digitalization is not only changing life at a rapid pace but will also bring about prosperity and happiness in times to come. This was stated today by the Industries Minister, Government of Rajasthan, Mr. Rajpal Singh Shekhawat. He was speaking as the Chief Guest at the second edition of the ‘Digital Rajasthan Conclave’ held at Hotel ITC Rajputana in Jaipur. The event was jointly organized by Federation of Indian Chambers of Commerce and Industry (FICCI) and Software Technology Parks of India (STPI).

The Minister said that owing to IT and digitalization life is not only changing fast but is also ensuring quality employment, good governance and financial inclusion. He emphasized on the fact that it was of paramount importance that the prosperity and happiness should be key factors that this change is bringing about. Success would mean nothing without happiness, he said, which is why the happiness index is being much talked about in the world.

Digitalization has ensured efficacy, effectiveness and transparency of service. He highlighted the challenge of ‘limited empowerment’ whereby people who had access to technology but were not using it effectively owing to lack of skills. This gap must be filled.

The Director General, Software Technology Parks of India, Dr Omkar Rai said that STPI has 2 units in Rajasthan. Of the 17 units in these 2 parks – Rs. 1000 crores worth softwares are being exported from Rajasthan. Overall in India such units in all the STPIs were exporting Rs. 3,41,490 crores worth softwares. The IT sector, he said, accounts for 7.7% of the total GDP of India. The Government of India initiatives likes ‘Make in India’; ‘Digital India’, ‘Startup India’, will ensure a sizeable section of world IT industry for India.

The Managing Director, Rajasthan State Industrial Development & Investment Corporation Ltd. (RIICO), Ms. Mugdha Sinha said that this Conclave will go a long way in bridging the digital divide. She said that even the ‘have nots’ were now using technology as was evidenced by use of paytm and other such devices. She said that only 27% in urban areas and only 4% in rural areas were using digital technology today. This number has to be increased to make it more effective. She urged the investors to make investment in the IT parks developed by RIICO.  The time has come when risk has to be taken and disruptions as well as rapid change will now a constant, she said.

The Partner, Ernst & Young, Mr. Milan Narendra said that the theme paper launched today examines the surge in the implementation of digital technologies across two themes: sectors and solutions. The report discusses in detail sectors like – Health, Identity Management, Citizen and Service Delivery, Transport, Agriculture as well as Tax and Public Finance. Additionally, theme-wise recommendations have been made to accelerate the digital transition of the State.

The first plenary session ‘Digitization as instrument for effective governance, public service delivery driving investments, employability and growth’ offered a host of opportunities in digitising the State. Director, Government Affairs, India & ASEAN Symantec Corporation said that e-mail attacks are becoming a weapon of choice in issuing cyber attacks. He further added that enterprises are unware of what is happening in their network, which is being powered by enterprise Wi-Fi.

Practice Partner, Government Consulting Wipro Ltd. highlighted 2 keys aspects of governance – processes by which authority is exercised and Government’s ability to manage its resources. He further added that Government 2.0 needs to be connected, responsive and citizen centric. Director, Solution Consulting, Digital Innovation Oracle India said that there is a serious need for the marriage of ubiquitous technology and continuity of public service. CEO, Startup Oasis, Mr. Chintan Bakshi said that technology is playing a big role in powering technology startups.