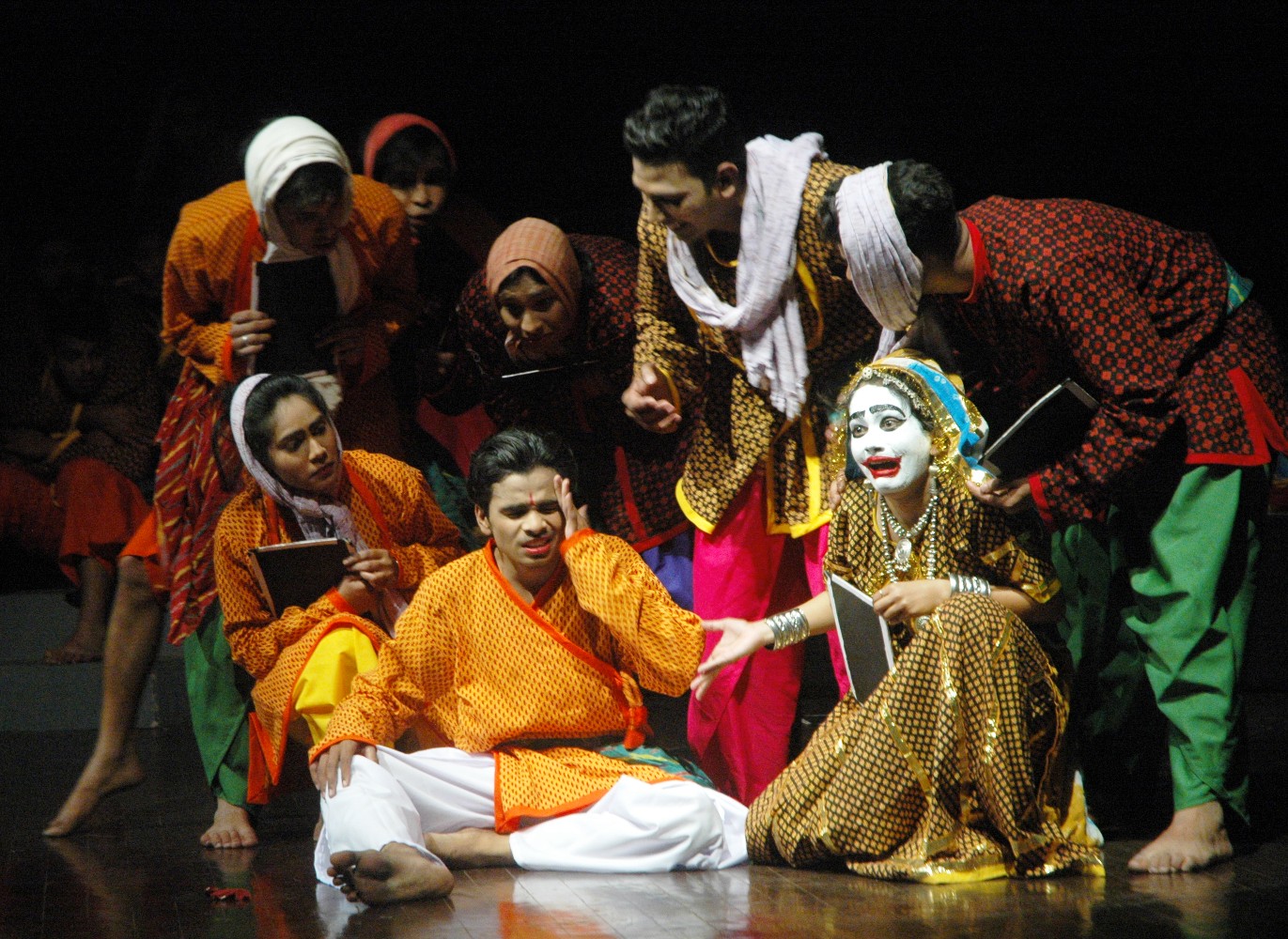 The week-long Rajasthani art and theatre festival, Rang Rajasthan began at Jawahar Kala Kendra (JKK) on 05 January with enthusiasm and vigour. Over the course of the day there was folk music and dance, staging of Rajasthani plays as well as a talk show with renowned folk artiste Mame Khan. It is to be recalled that the programme has been curated by Rang Mastaaney and is being presented by Jawahar Kala Kendra.

The day began with a performance by ‘Mix of Rajasthan’ band at the Open Mic Jaipur session in the Kendra’s Indian Coffee House. They rendered popular Rajasthani folk songs like Kesariya Balam, Chaudhary, Nimbuda Nimbuda, Mast Kalandar, among others.

Play Re Gailyaa by Kapil & Priyadarshini

A musical drama ‘Re Gailyaa’ by Kapil and Priyadarshini was staged in Rangayan. The play was based on a folk tale and revolved around the story of an absent minded and illiterate boy ‘Bhomya’. He neither studies nor goes to the school despite of his mother’s scolding. One day Bhomya gets a stomach ache due to which he has to go to another village. Over there a tragedy ensues with Bhomya which becomes a laughing stock for the audience.

‘Anjali Sharma Urf Anji’ was based on the Hindi adaptation by Dr. Vasant Dev of Marathi play ‘Chi Sau Ka’ written by Vijay Tendulkar. Anji is undaunted by the fact that she is getting on in years. Determined to find a right match, she sets out to search her dream man herself.  During this journey Anji comes across several funny as well as difficult situations. The climax persuades the play’s audience to re-examine its value system especially the one concerning women.

The day concluded with folk fusion music and dance performances. The highlights of the performance were Bhawai by Murari Lal & Group, Ghoomar by Jyoti Bharti Goswami and Shekawati Chang by Shyam Sundar & Group.

Mame Khan shared his life journey from early childhood to his various performances across the globe and experience of singing for Bollywood films. Singing, he said, is in his blood. He also threw light on the origins of the Manganiyar community.

On 6 January, there will be performance on acoustic guitar by Shubham Sharma, cajon percussions by Ashwani Pareek as well as a vocal rendition along with acoustic guitar by Aashreya Baweja as a part of Open Mic Jaipur sessions at 1.30 pm. At 3.30 pm there will be staging of the play Aadhi Raat ke Baad by Swapnil, followed by a talk show by Smita Bansal at 4.30 pm. The play Sajjan Maina by Priti Dubey will be staged at 5.30 pm. In the evening from 6.30 pm, there will be folk fusion music and dance performances.