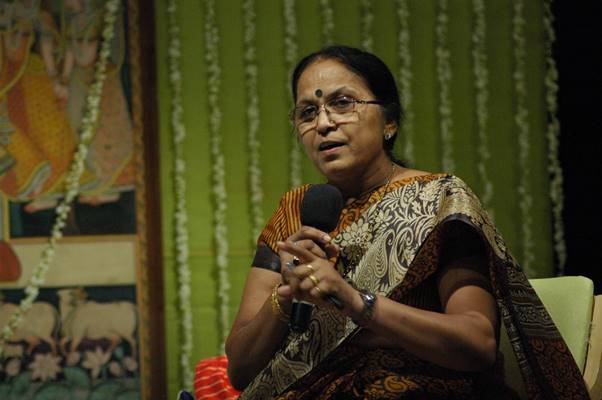 “HAVELI SANGEET IS A PURE FORM OF CLASSICAL MUSIC”

Haveli Sangeet is a pure form of classical music consisting of numerous alaaps, gaans and pads sung in the temples. Haveli Sangeet and Shastriya Sangeet are similar to each other and the age old sangeet is dedicated in praise of the almighty. Haveli Sangeet lays the foundation for the other forms of music and is perhaps one of the most melodious forms of music having lay, taal, sur, thumari, and laykari. This was stated by Padmabhushan Pt. Gokulotsav Maharaj. He was speaking in the talk session on the ‘Contribution of Haveli Sangeet in Indian Classical Music’ organized by Jawahar Kala Kendra (JKK) as a part of the 2-day Haveli Sangeet programme.

Gokulotsav Maharaj further said that Gharanas are a newer way of distinguishing music styles and are only 250-300 years old. Haveli Music should not be confined to a gharana. The Haveli music is believed to have an edge over dhrupad because the music has none other than Lord Krishna himself as an audience. He further added that the term ‘haveli sangeet’ is a recent one, coined by Thakur Jaideva Singh in the 1960s.

Earlier, the programme began with Pt. Prakash Chandra Kumawat from Nathdwara Gharana giving an introduction to the Haveli Sangeet. He said that essentially, a tribute to Lord Krishna, the forms of Haveli Sangeet includes devotional renditions like kirtans, bhajans and bhava nritya — all related to religious worship. These dhrupad style compositions are sung all through the day to coincide with each activity of the Lord- to wake him, entertain him while he ate as well as to lull him to sleep.

Head of the Department, Music , Rajasthan University, Dr. Madhu Bhatt Tailang said that Haveli Sangeet and Dhrupad are quite similar to each other. Pad and raag are still sung with the same tradition as they were sung anciently. While some gharanas have evolved and experimented in their own ways but haveli music has kept its ancient techniques intact.