TERRORISM CAN BE ELIMINATED BY ADOPTING SUFISM — Arjun Ram Meghwal, Union Minister of State for Finance and Corporate Affairs

HomePress ReleaseTERRORISM CAN BE ELIMINATED BY ADOPTING SUFISM — Arjun Ram Meghwal, Union Minister of State for Finance and Corporate Affairs 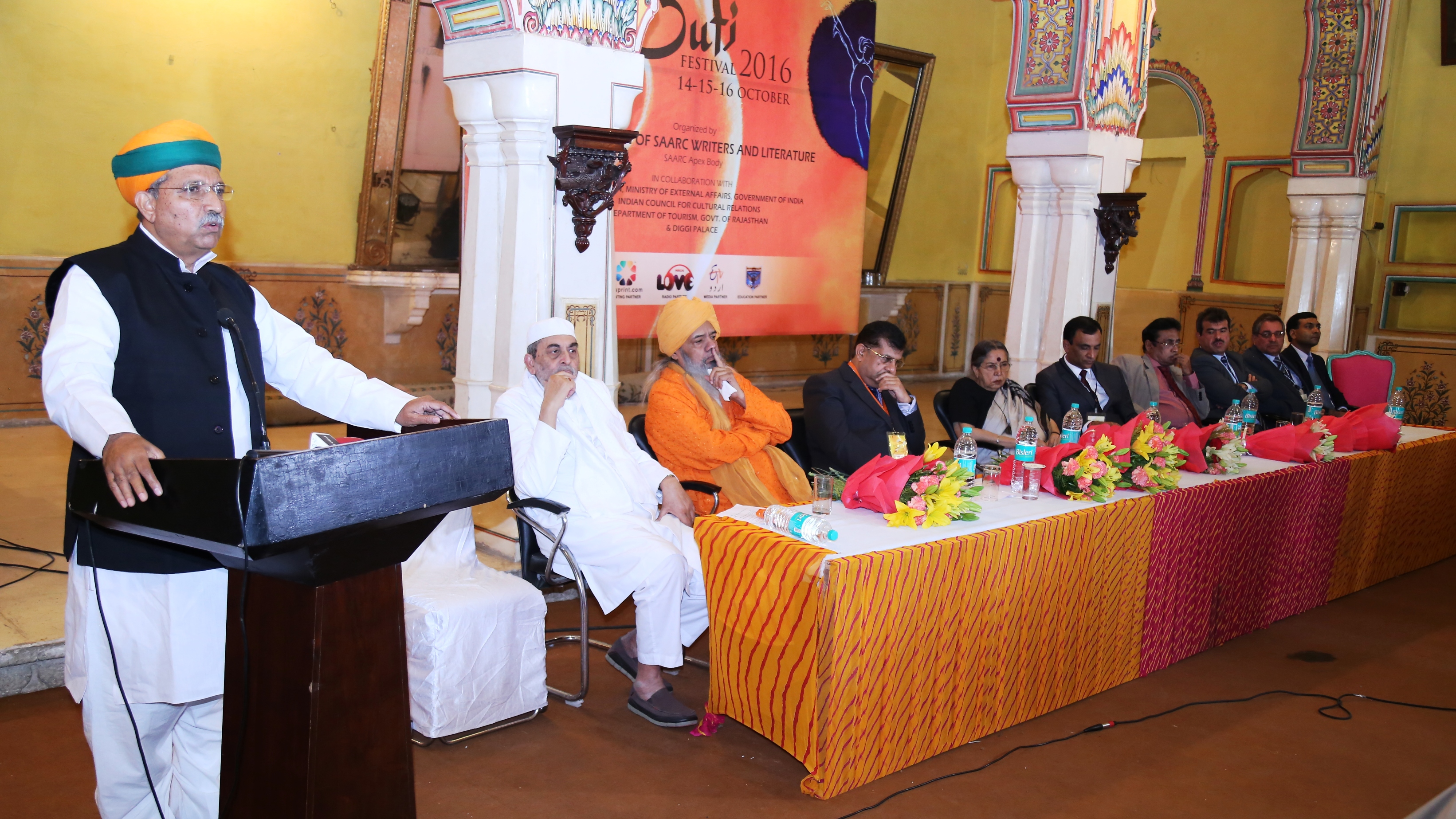 TERRORISM CAN BE ELIMINATED BY ADOPTING SUFISM — Arjun Ram Meghwal, Union Minister of State for Finance and Corporate Affairs

Jaipur, 14 October: The biggest disease in today’s time is terrorism. It can be eliminated by spreading Sufism, said the Union Minister of State for Finance and Corporate Affairs, Mr. Arjun Ram Meghwal. He was speaking at the inaugural session of the 3 day South Asian Sufi Festival held today at Diggi Palace. Sufism has played a pivotal role in breaking down superstitions and blind faith and in contemporary times of violence it has become all the more relevant. Sufism is a unique combination of music and meditation. With humanity as its religion, Sufism believes that God is omnipresent. There is no discrimination of caste or religion in Sufism. Therefore, it is only apt to understand, adapt and follow the tenets ofSufism, he added.

He cited the example of Manganiyar community in Barmer which sings songs of Bulle Shah. He said the community not only sings those songs but has also made Sufism an integral part of their everyday life. He also recited a ghazal of Bulle Shah on the occasion which was greatly applauded by the audience. He also spoke about renowned saints like Kabir, Meera, Ras Khan and Rehman who were greatly influenced by Sufism.

The Director of Foundation of SAARC Writers and Literature (FOSWAL), Padmashri Ajeet Cour said that our foundation has chosen to hold this Sufi festival because Sufism is the reconciliation of all opposites: the outer and the inner, the material and the spiritual, the here and the hereafter, the human and the divine. In this spirit, Sufism has provided a way to reconcile some of the religious doctrines of earlier cultural and religious systems in a crystallized amalgamation. She informed that this 3 day Sufi festival is the Foundation’s 52nd  mega event.

She further added that the festival is not only about religion or religious poetry but is about fastening together the hearts, the minds and the conscience of the people, through love, compassion and mutual respect.

Joint Secretary SAARC Division, Ministry of External Affairs, Mr. Prashant Agarwal said that Sufism is all about connecting people. It cuts across countries, religions as well as people. Sufism spreads the message of peace, harmony and brotherhood. Appreciating the initiative of the organizers, he said that this festival is an earnest effort in this direction. The Ministry is hopeful that in the coming years the festival will grow from strength to strength.

Justice R.S. Chauhan of Karnataka High Court said that Sufism is essentially a liberal view towards life. The Indian Constitution, especially the Preamble, is infused with the spirit of Sufism as it talks about egalitarianism, justice, liberty and fraternity. It shows the fusion of constitutional law with theory of religion.

On the occasion, a book on artist Arpana Caur, ‘Jiska Man Rangrez’ was also launched by Ms. Sangeeta Juneja.

The Vote of Thanks was proposed by Thakur Ram Pratap Singh of Diggi.

Parallel to the paper presentations and poetry sessions there were panel discussions at the Ram Durbar Hall on “Sufism in India : Perspectives Over Time”, “Sufism & Its Inter Religious Links”; “Sufi – Bhakti Harmony ”; “Promoting Sufi Tenets for World Peace” and “Role of Education in Developing Human Values for Harmony”.

There was also a open Mic session by Jaipur Book Lovers on the topic ‘Teachings of Sufism & Application in Today’s Life’ at Kewra Lounge.

In the evening there will be Rajasthani Folk Performance by Nathu Lal Solanki and Group, a Sufi fashion show based on the theme ‘Jogan’ highlighting Meera Bai as well as a musical recital by renowned Classical and Carnatic music composer Ms. Vidya Shah.