“PROMOTING RAJASTHAN IS THE RESPONSIBILITY OF BOTH THE GOVERNMENT AND PRIVATE STAKEHOLDERS” – Apurv Kumar President, FHTR

HomePress Release“PROMOTING RAJASTHAN IS THE RESPONSIBILITY OF BOTH THE GOVERNMENT AND PRIVATE STAKEHOLDERS” – Apurv Kumar President, FHTR 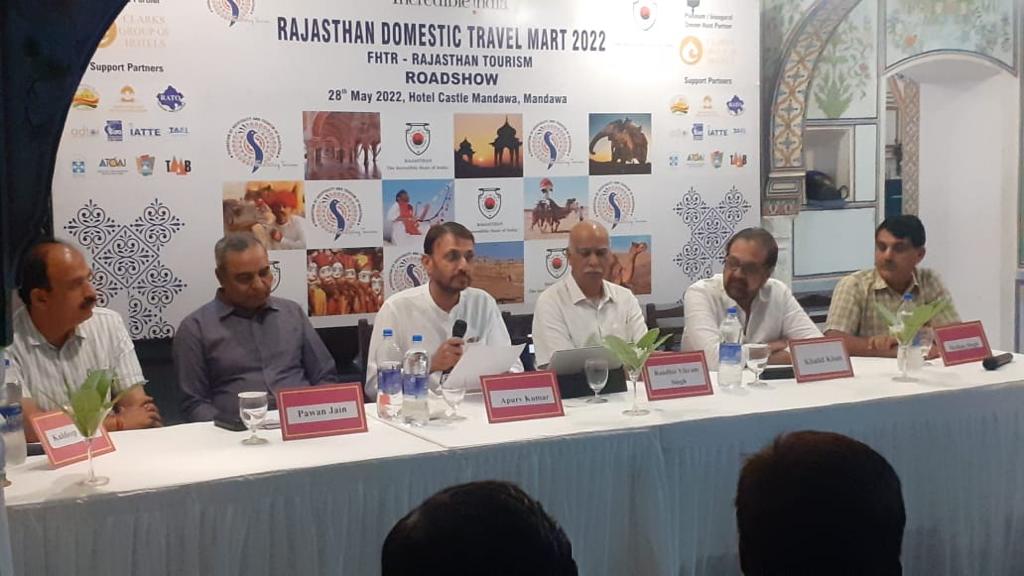 “PROMOTING RAJASTHAN IS THE RESPONSIBILITY OF BOTH THE GOVERNMENT AND PRIVATE STAKEHOLDERS” – Apurv Kumar President, FHTR

President, Federation of Hospitality and Tourism Rajasthan (FHTR), Mr Apurv Kumar in an elaborate presentation said that promoting Rajasthan is the responsibility of both the Government and private stakeholders of the travel and tourism industry in the State. The State Government has been doing a commendable job by introducing a tourism-friendly and inclusive budget as well as granting industry status to tourism. Several schemes have also been announced to enable Ease of doing business. However, each member of the travel and tourism industry has a significant role to play in promoting the State because public-private partnerships are key to forging new paths and reviving the industry. He was speaking at the second roadshow for the Rajasthan Domestic Travel Mart (RDTM) 2022 held at Castle Mandawa in Mandawa. It was jointly organized by the Department of Tourism and Federation of Hospitality and Tourism (FHTR) in Rajasthan. The RDTM 2022 is scheduled to be held from 22 to 24 July in Jaipur. Also present on the occasion were – President of Indian Heritage Hotels Association, Mr Randhir Vikram Singh and President of Hotels and Restaurant Association of Rajasthan, Mr Kuldeep Singh Chandela. A number of potential buyers and sellers for RDTM also attended the roadshow.

Mr Kumar further said that towards this aim an MoU for public-private partnership was signed on 6 April for organising RDTM 2022. The Mart will be organised on the same lines as its debut edition in 2018 but with greater responsibility and significance than before. This time around as domestic tourism continues to be the focus of tourism in India, there is also the added responsibility of marketing and promoting Ease of Doing business policies introduced by the State Government.

On the occasion, the Joint Director, Department of Tourism, Government of Rajasthan, Mr Pawan Jain said that Rajasthan has immense potential for investment in tourism. The State witnesses a continuous growth in tourist footfalls, has the presence of leading hotel chains and the demand for hotel rooms has been increasing with the emergence of industries viz. mines & minerals, renewable energy, etc. The State Government has introduced many initiatives to accelerate investment in the tourism sector like Rajasthan Tourism Unit Policy 2015, Rajasthan Film Tourism Promotion Policy 2022, Revised Guidelines for Granting Certificate of Heritage 2021, etc. Similarly, the Department has also undertaken lucrative marketing and branding initiatives by participating in major travel marts (both domestic & international), organising travel & tourism marts to promote inbound and domestic tourism, organising Rajasthan Calling roadshows in major cities, and others.