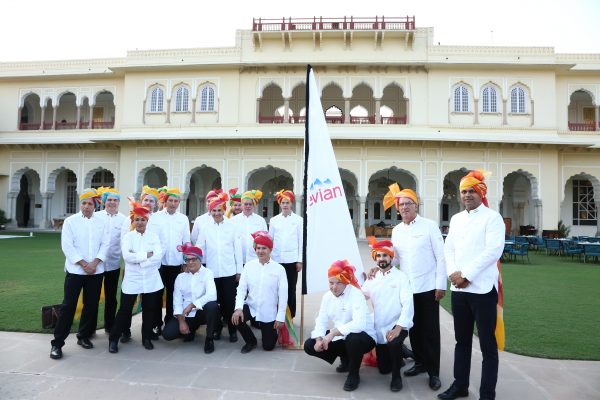 Press Note — Grand chefs of Heads of State from 16 countries

As many as 16 grand chefs of the world’s most exclusive gastronomic society, ‘Le Club Des ChefsDes Chefs’ are in Jaipur as a part of their annual general assembly in India.  Le Club des Chefs desChefs (CCC), founded by Gilles Bragard in 1977, is a club that annually brings together the personal chefs of Heads of State across the globe to meet and discuss their work. The visiting group comprises chefs to Presidents, Prime Ministers and royals across the world including US President Barack Obama, the British Queen and the German chancellor. They are in India on the invitation of Executive Chef to the President Pranab Mukherjee, Chef Montu Saini, who is also a member of elite Paris based club.

One of the society’s primary purposes is to promote major culinary traditions and to protect the origins of each national cuisine. The Club des Chefs des Chefs also aims to develop friendship and cooperation between its members, who have similar responsibilities in their respective countries.

Says Founder, CCC, Gilles Bragard: “When I founded the CCC, my ambition was to pay tribute to the chefs of heads of state: these legendary figures who work behind the scenes. Every year since 1977, I have sought to bring them together across the world to give them the opportunity to experience the gastronomy of the host country and discuss the major trends in cooking with fellow chefs. As they are aware of the role that these chefs play in international diplomatic relations, heads of state have been quick to support our Club by officially receiving every one of our meetings.”

Chef Montu Saini along with a few other chefs also cooked for a charity dinner on Tuesday, October 25, the proceeds of which will go to benefit two organisations. These are the Kailash Satyarthi Children’s Foundation-India, a children’s rights body by the 2014 Nobel Laureate and the Jaipur-based Princess Diya Kumari Foundation, which works for inclusive development and the upliftment of the underprivileged in Rajasthan, with a strong focus on women and girls.

Rambagh Palace, Jaipur: Originally built in 1835 and host to generations of royal families and their guests, Rambagh Palace is famed for being the residence of  Maharaja Sawai Man Singh II and his beautiful queen, Maharani Gayatri Devi. Set amidst 47 acres of lush gardens redolent with the fragrance of flowers and the calls of resplendent peacocks, the stately palace, often called the jewel of Jaipur, is steeped in royalty and Rajput hospitality. Now a palace-hotel of Taj Hotels, Resorts and Palaces, its regal architecture and interiors embellished with fine carpets, antique furniture and artefacts, recall the days when the celebrated royal couple lived here and hosted distinguished guests from across the world. And to savour a spot of royal hospitality and dining, one can enjoy delicacies once prepared in imperial kitchens at Suvarna Mahal, the former palace ballroom designed in 18th century décor!