IIHMR UNIVERSITY ALUMNA ON THE COVER PAGE OF CSR TODAY 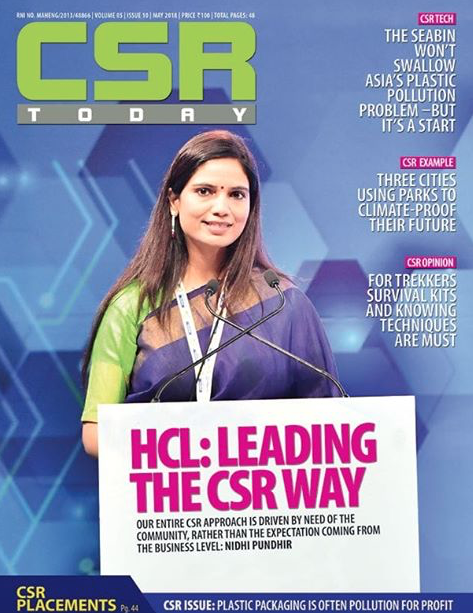 IIHMR UNIVERSITY ALUMNA ON THE COVER PAGE OF CSR TODAY

Nidhi Pundhir, Director CSR, Head-HCL Foundation, has been interviewed for the CSR approach of HCL Foundation.  The organization works to alleviate poverty and achieve inclusive community growth and development. The Foundation engages the community where they make optimal long-term investments in education, health, livelihoods and environment, as well as providing disaster response and rehabilitation support.

Pleased with being featured, Ms Pundhir said that it is indeed a pleasure to see CSR shaping up towards Nation Building in India. Having worked globally on strengthening community based ecosystems, it is critical for India to invest in these mechanisms and also utilise the opportunity of corporate partnerships. She went on to say that her Masters in Hospital and Health from IIHMR University gave the right foundation in terms of understanding development subjects in-depth, having an empirical approach, to be objective, logical and most importantly made learning a habit. Thanks to incredible faculty and peer group at IIHMR.

With almost 19-years of experience, Nidhi in the past, has worked with Plan International as Global Advisor, SOS Children’s Villages International Asia Office as a Director and Save the Children UK, to name a few. She had been conferred with the “CSR Leadership Award” by National Award for Excellence in CSR & Sustainability, in September 2017. She was also honoured with the “100 Most Impactful CSR Leaders (Global Listing)” in the February 2017.

It is to be noted that CSR Today is a marquee publication. It is circulated amongst World Policy Bodies, leading educational institutes globally, Council of Ministers, Member of Parliaments and Secretaries to Government of India apart from Corporate CEOs and opinion makers, Bureaucrats, Chairman and CEOs of public and private sector, CSR Heads of companies, among others.