“Ease of doing business is a continuous exercise in Rajasthan”– Chief Minister, Rajasthan 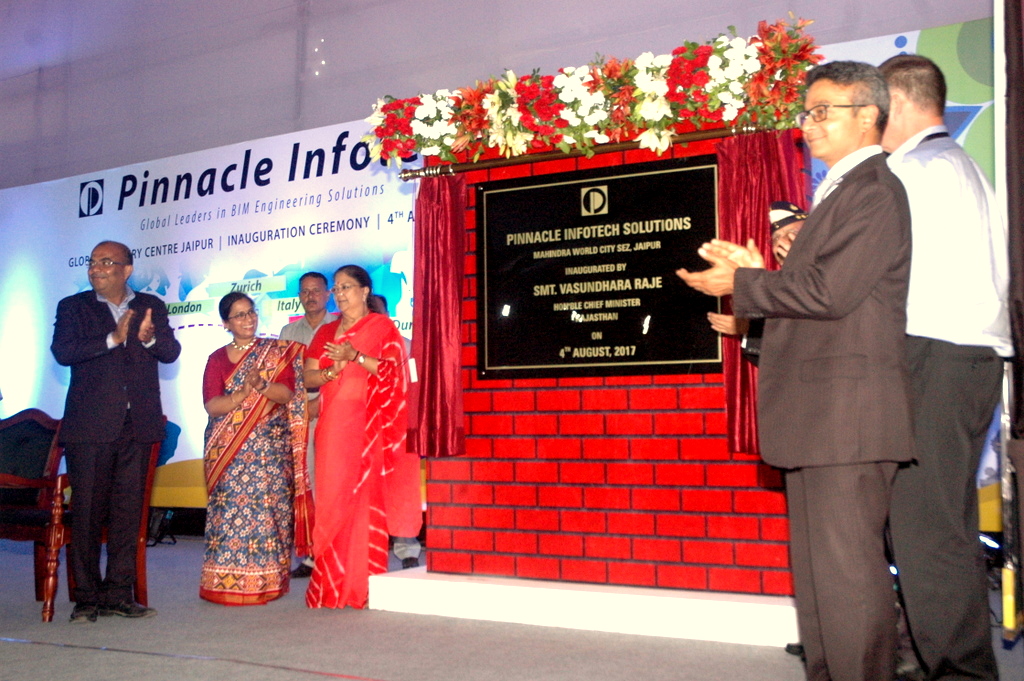 “Ease of doing business is a continuous exercise in Rajasthan”– Chief Minister, Rajasthan

The ‘Ease of Doing Business’  is not a one time exercise but a continuing one. To succeed in promoting investments, government processes need to be studied and re-engineered repeatedly looking at the changing dynamics of the business world. In Rajasthan, I can assure you all that our approach towards process re-engineering is one that is continuous. This was stated by Rajasthan Chief Minister, Ms. Vasundhara Raje at the inauguration of Pinnacle Infotech Solution’s new Global IT Delivery Centre today at Mahindra World City in Jaipur.

The Jaipur centre is being setup with an investment of Rs 100 crores   to provide employment to 1100 Engineers, Architects, IT and other professionals, when fully operational. The new facility is world-class with latest workstations and servers, network and security system, power-backup and all allied services. Pinnacle has already applied for LEED Platinum certification for the project and confident of achieving it. Already 260 Engineers and Architects have been hired from different colleges in Rajasthan and have been trained at Pinnacle head office in Durgapur. The team is now working on global iconic projects across the world such as Kingdom Tower in Jeddah, Saudi Arabia – the tallest building in the world -1.1 km tall, Muscat & Salalah Airport, Oman, Lusail Inaugural FIFA Football Stadium at Doha, Qatar (prestigious stadium of capacity for 80,000 people for World Cup 2022), Hospitals in Saudi Arabia.

The Chief Minister further said that as Governments shrink, the role of the Government as a primary provider of employment gets reduced. This is true of all States. Today, opportunities for employment are coming more from private enterprises than from Government. Since December 2013, over 10 lacs employment opportunities have been created in the private sector by the State Government.

She congratulated Pinnacle Infotech Solutions for opening their new global delivery centre in Jaipur. She said she was glad that the project has already built a large team of engineers and architects from Rajasthan for the Jaipur facility and started executing iconic projects around the world. I am especially happy that the iconic Lusail Stadium – Inaugural FIFA stadium in Doha for the Football world cup 2022 is being engineered and executed from Jaipur. She urged the promoters to explore making some iconic buildings in the Pink City in near future.

The Vice President, USA, Pinnacle Infotech, Mr. Scott Pitman said that he was amazed to learn the powerful capability of India and its people.  He further added that joining the Jaipur team helped him understand the capability of the city and its indispensable addition to the company. He explained that as the company continues to grow and expand reaching many more countries, the need for talented people also grows. He was delighted to find such skilled workforce to be a part of the Jaipur team.

On the occasion the Chief Executive and Founder, Pinnacle Infotech, Mr. Bimal Patwari proposed to digitally map the traffic, water supply and sewage facilities of the State at no profit basis. He further proposed to bring in the best brains of the world to transform Rajasthan into not only a ‘Smart City but the Smartest City’ of the country. He also appreciated the efforts made by the Government of Rajasthan and the Chief Minister to organise events such as Resurgent Rajasthan to change to economic scenario of the State.

The Vote of Thanks was proposed by the Head of Operations, Jaipur, Lt. General SB Sehajpal.