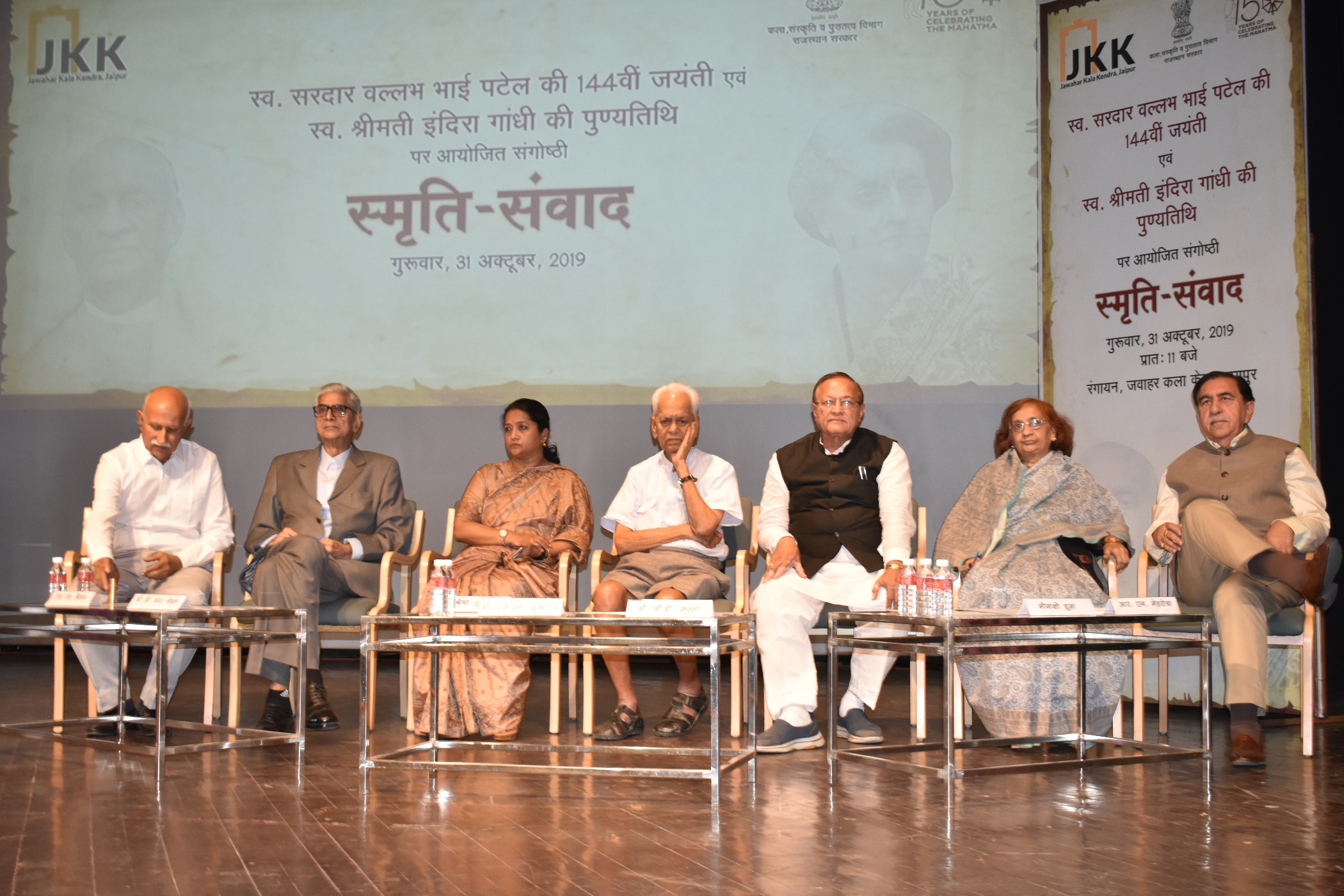 Today’s youth should follow the 3 principles that Indira Gandhi strongly believed in – farsightedness, discipline and courage. Indira Gandhi considered poverty to be the root of most of the problems of the society. Hence, she decided to work towards alleviating the same by creating job opportunities and integrating the youth to the working population of the country. This was stated by Minister of Art, Culture and Archaeology, Dr. BD Kalla at ‘Smriti-Samvad’ organised at Jawahar Kala Kendra (JKK). The event was organised on the occasion of the 144th birth anniversary of Late Sardar Vallabhbhai Patel and the death anniversary of Late Indira Gandhi.

The Minister further said that Indira Gandhi’s visit to Jaisalmer had a huge positive impact on the development of the city. It was after her visit that international tourists also starting coming to Jaisalmer. The iconic film, ‘Sonar Kella’ by Satyajit Ray was also shot here. It was due to Indira Gandhi and Rajiv Gandhi’s effort that 100% grant was given for the development of the Indira Gandhi Canal. He further spoke about Sardar Patel’s pivotal role in the integration of the princely States in the country as well as the various Satyagraha movements against the unfair British policies.

Gandhian thinker, Mr. S.N. Subba Rao said that just like the movement for Independence, now there should be a movement for making India corruption free. The true citizen of independent India should abstain from violence, corruption and falsehood. He appreciated the first-of-its-kind initiative of the State Government to launch a Peace and Non-violence Cell. He created an aura of energy and patriotism in the Rangayan auditorium by singing patriotic songs with the audience.

Reminiscing Indira Gandhi steel grit and determination to work for the nation, Padma Bhusan, IAS, Dr. D.R. Mehta (Retd.) talked about the time when the Late Prime Minister visited the Jaisalmer after 70 children died due to 5-year long drought in the city. She also flagg ed off the first-ever cattle special train in Rajasthan.

Principal Chief Conservator of Forests (Retd.), Government of Rajasthan, Mr. R.N. Mehrotra said that Indira Gandhi was passionate lover of nature, forests and animals. This dimension has not been covered by any of her biographers. India was the first country to pass the Wildlife Protection Act in 1972, before which there were only 5 National Parks. Today, there are more than 600 National Parks in the country. During her tenure, she also launched Project Tiger in 1973 and today it is the most successful conservation project directed towards a single animal.

Historian, Ms. Meenakshi Hooja said that after the East India Company established its rule in India, the territories were divided into 2 categories – Provinces & Presidencies and Princely States. The integration of the princely states was a herculean task completed by Sardar Vallabhai Patel. On 30 March, 1949, ‘Greater Rajasthan’ was announced because of Patel’s efforts. She further said that Patel was a man of conviction.

Mr. Shyam Sundar Bissa, IAS (Retd.) gave a presentation on ‘Sardar The Iron Man and His Relevance in Modern India’. He threw light on the early life of Patel and said that initially he was sceptical and critical of Gandhi. However, later he was impressed with Gandhi after the Champaran Movement and took charge of the Kheda Satyagraha in 1918 for exemption of tax because of destruction of Kharif crop. He further went on to take charge of other movements like Borsad Satyagraha in 1923 and Bardoli Satyagraha in 1926. After Independence, he showed his belief in the administrative services created by the British and played a major role in changing its name from Imperial Civil Services (ICS) to Indian Administrative Services (IAS).