VIEWERS LEARNS NOTES AND CHORDS, HAND POSITIONS, SCALES AND MUCH MORE AT GUITAR SESSION AT JKK 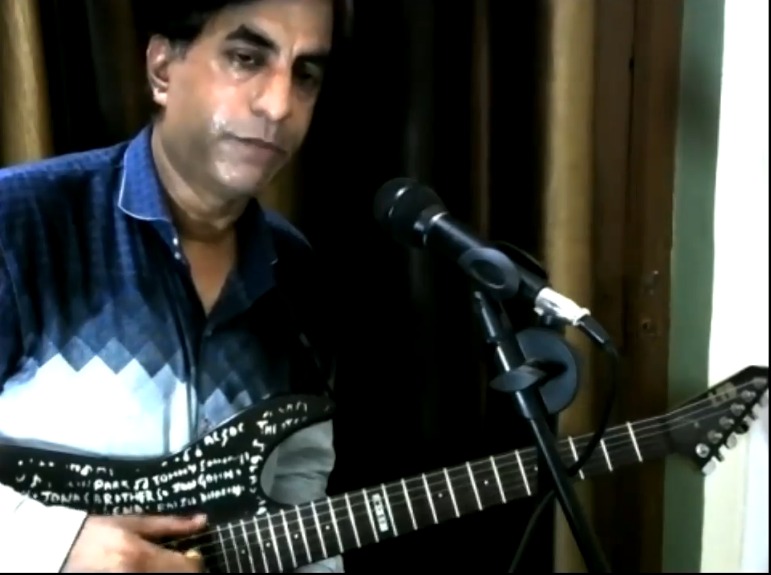 VIEWERS LEARNS NOTES AND CHORDS, HAND POSITIONS, SCALES AND MUCH MORE AT GUITAR SESSION AT JKK

As a part of the ongoing ‘Online Learning – Children’s Summer Festival’ being organised by Jawahar Kala Kendra (JKK), viewers witnessed a performing arts session on ‘Guitar’. It was conducted by guitarist, Mr. Pavan Goswami. During the session, students learned about the basics of guitar, notes and chords, building notes, hand positions, wrist movements and much more.

The session began with a brief introduction to guitar as a musical instrument. The artiste said that Guitar is a western string instrument that has a very romantic sound and is very handy and trendy. The instrument is so popular that almost every third house has a guitar. Everyone enjoys it and wants to try their hand at learning how to play it. Learning to play the guitar properly, requires hard work, patience, consistency and practice. If a student does not practice even one day his learning recedes by 7 days. Often people rush to play songs on the guitar almost immediately. However, it is very important to first have command over the instrument and play very slowly to create beautiful sound from the guitar later, he said.

The artiste went to demonstrate various wrist movements, hand positions, body posture, fixing the guitar on the body, finger exercises and much more. Talking about major and minor scales, he said major scale is usually found in songs with happy moods and straight melodies. Whereas, minor scale is found in songs which are sad, dull, moody or blues. Apart from playing by reading notes, it is very important to train the ears to play from listening as well.