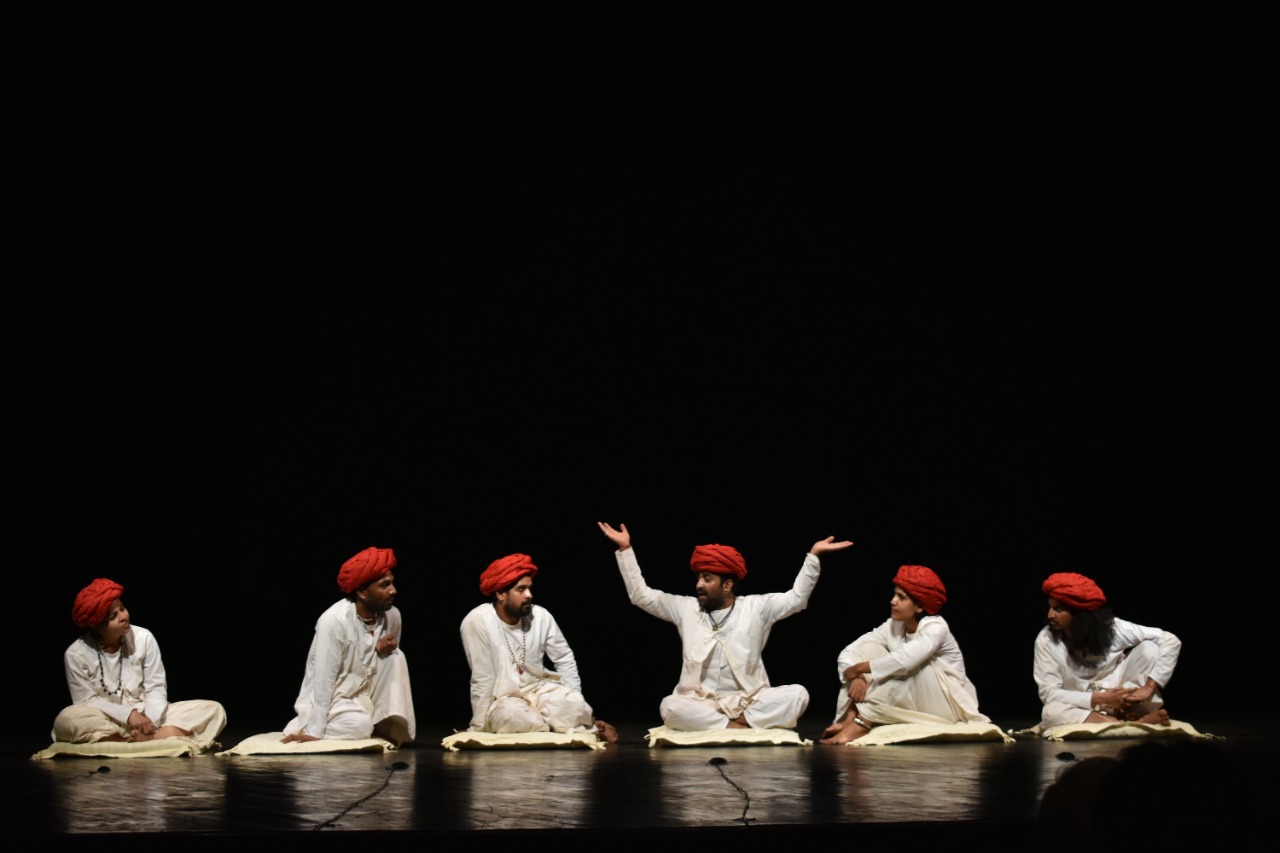 On the second day of the performing arts festival, ‘Rasrangam’ organized by Jawahar Kala Kendra (JKK), the audience enjoyed mellifluous morning Raga, a play based on the pandemic and electrifying musical performances by the folk artistes of Rajasthan. The festival will be on till 13 March and will present classical music, instrumental, classical dance and theatre performances.

The day began with ‘Morning Raga’ by classical vocalist, Mohammad Aman Khan from the Tonk district of Rajasthan in the JKK lawns. In his presentation of ‘Shashtriya Gayan’, he rendered traditional classical compositions and sang an invocatory piece dedicated to Lord Shiva to mark the ongoing celebrations of Maha Shivratri. He was accompanied by Pt. Alok Bhatt on Harmonium, Mohammad Shoaib on Tabla, Zakir Husain on Sarangi and Mohammad Irfan on Tanpura.

Following this, ‘Sitar Vadan’ was presented by Dr Vikas Gupta in the JKK lawns.

Born in Jaipur, Dr Gupta has had the opportunity of being imparted rigorous training and systematic education in ‘Sitar-recital’ by maestros like Smt. Annapoorna Devi, Smt. Sharan Rani, Shri Damodar Lal Ji Kabra, Ustad Amjad Ali Khan and Pt. Vishwa Mohan Bhatt. He is an accomplished sitar player and has extensively played both in India and abroad.

In the evening, Ujaagar Dramatic Association, Jaipur presented the play ‘Hunkaro’ directed by Mohit Takalkar in Rangayan. The play was based on stories by Vijaydan Detha, Chirag Khandelwal, and Arvind Charan. It was a performance piece devised just after the second wave of Covid-19 as a reflection of what the world endured during the pandemic. The idea for the play came from a simple yet disturbing realisation that the lockdowns have reduced not only the attention span of people but also the capacity and need to listen. But the world lives on hope,that binds the performance. The performance laid a strong emphasis on the beauty of Rajasthani language and spoke about the aesthetic value of languages, the importance of the uttered word as well as the art of listening. The piece was replete with songs that came from the Manganiyar tradition but avoided musical instruments, once again underlining the spoken word.

The evening concluded with ‘Rajasthani Sufi Night’ by Raitila Band in Madhyavarti. They presented a special performance, directed by Govind Singh, which took the audience on a journey through Rajasthan’s roots, legacy and musical culture. They celebrated stories of Sufi saints across continents and generations through the stories of Shah Latif, Jeevan Shah, Bulleh Shah, Khushroo and the songs of Meera, Kabir and Sant Shardul. Their performance used the sounds of ancient instruments like Sindhi Sarangi, Algoza, Dholak, Morchang and Khartal. The show incorporated the true essence of Rajasthan and showcased a mixed set of songs in Rajasthani and Sufi repertoire and Holi celebration songs.

‘Shakti – an international art camp to tribute women power also began with as many as 30 artists from India as well as abroad. The art camp will be on till 8 March from 10 am to 7 pm in the Graphic Studio.