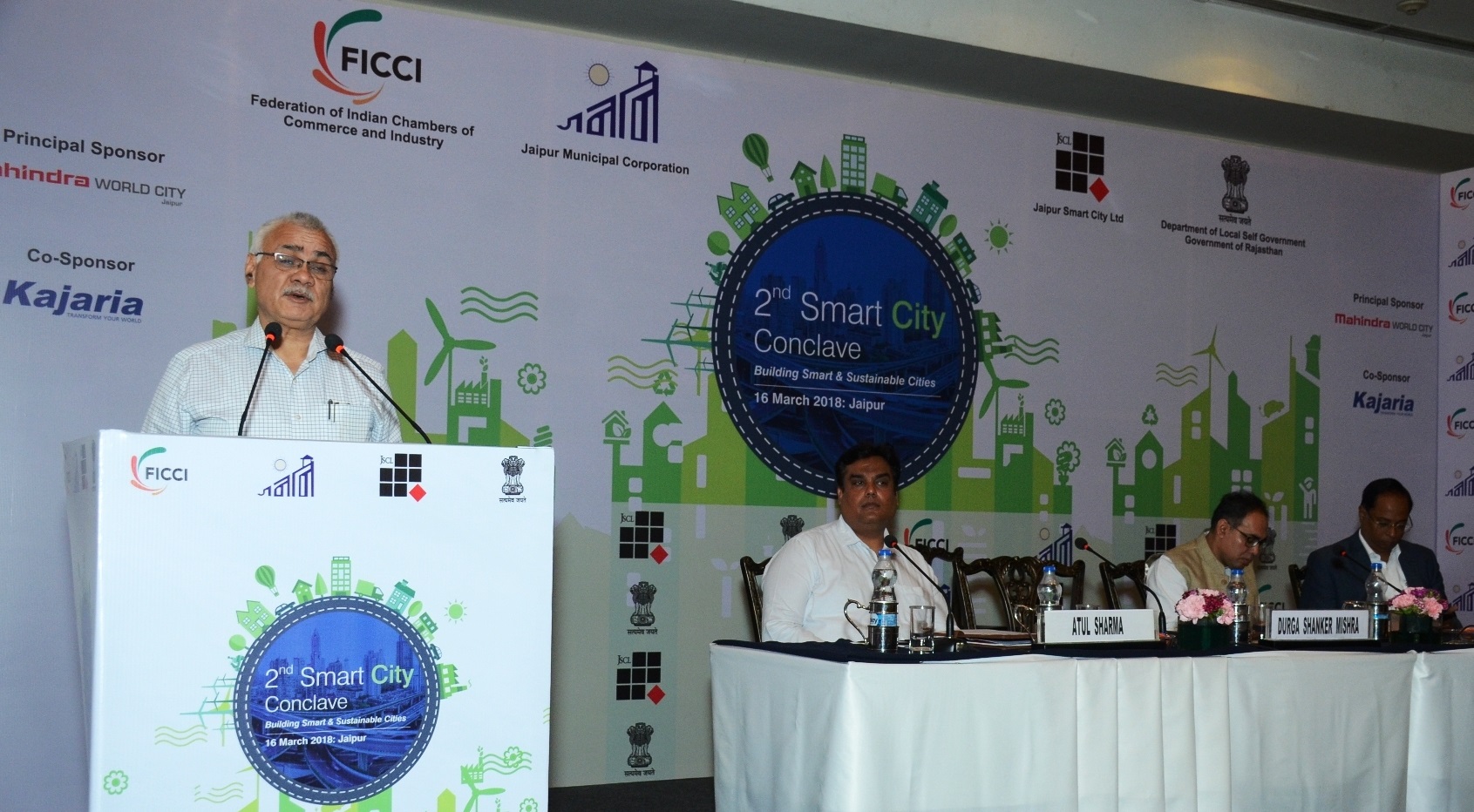 Urban areas are experiencing rapid and accelerated growth in terms of migrating population from rural areas to the cities. In the 2011, 31.2% of the population was recorded living in cities. This number will grow exponentially to almost 40% by 2030. When today’s 40 crore population will grow to 80 crores a new urban India will emerge. This was informed by Secretary – Housing and Urban Affairs, Government of India, Mr. Durga Shanker Mishra. He was addressing ‘The 2nd Smart City Conclave – Building Smart & Sustainable Cities’ held at ITC Rajputana. The event was organised by Federation of Indian Chambers of Commerce and Industry (FICCI), in association with Department of Local Self Government, Rajasthan; Jaipur Municipal Corporation and Jaipur Smart City Ltd.

He further added that the concept of smart cities will act as a lighthouse to guide others cities to follow the development. Today more than 65% of the GDP share generates from the cities. This amount will grow to almost 75% by 2030. The smart city concept represents the aspirations of the citizens of a particular city. This transformation of old cities into smart cities is not only introducing advanced and new age technology, but also to make the maximum utilisation of minimum resources available. Inclusive development should be promoted to facilitate progress of the society as a whole. Cities need to fulfil certain benchmarks like – providing 24/7 water & electricity, walkable streets, housing for all, proper education and health facilities, among others before they can be introduced to the concept of smart cities.

Mr. Mishra further highlighted that 8 smart cities already have fully operational ‘Smart City Command and Control Centres’, with 14 cities nearing completion and 27 cities have already released tenders for Smart City Command and Control Centres. These centres use sensor technology to monitor security & safety, disaster mitigation, sanitation, waste management and much more. More than 50% of the people in the world prefer to walk. There is huge need to create non-motorised modes of transportation to facilitate mobility through the city. Similarly, reduction of solid waste by converting it into wealth through reuse and recycle should also be the prime focus of smart cities.

Jaipur Mayor, Mr. Ashok Lahoty said that currently there are 11 agencies working towards the development of Jaipur. These agencies need to be brought under one umbrella organisation. Almost Rs. 27,000 Crores have been spent in the development of the city in past 10 years. The need of hour is to create an underground cabling system for all wires and complete pending sewage management projects. Rajasthan has been a smart example for developing sustainable cities from ages but now we need to have even more smarter cities. Smart use of natural resources is required to leverage and adapt for the new smart cities.

Member FICCI, Rajasthan State Council and Business Head, Mahindra World City Jaipur, Mr. Sanjay Srivastava said that existing cities need to look beyond the needs and challenges of today and reinvent themselves for tomorrow. Expansion should be planned in a sustainable manner keeping in mind the needs of the people and the city.

The vote thanks on the occasion was issued by Head, FICCI Rajasthan State Council, Mr. Atul Sharma.

Commissioner, Udaipur Municipal Corporation and CEO, Udaipur Smart City Ltd. Mr. Sidharth Sihag said that the Udaipur project for Smart City amounts to Rs. 1221 crores. Under this, 9 projects worth Rs. 30 Crore have been completed and 14 projects amounting to 917 Crores is underway. Work on sanitation, solar energy, control and command centres, e-Rickshaws as well as smart classes have been completed. Projects for underground cabling and ducting system are underway.

Commissioner, Kota Municipal Cooperation and Additional CEO, Kota Smart City Ltd. Dr. Vikram Jindal said that Kota is focussing on stone water drainage, creating green walking spaces and beatification of Nalas. The city is also involved in transforming 3 existing stadiums into integrated sports and cultural complexes. A programme for e-office platform Nigam has also begun. Other than this projects for parking, smart roads and development of river water front is also in progress.

Commissioner, Ajmer Municipal Cooperation and Additional CEO, Ajmer City Ltd. Mr. Himanshu Gupta said that Ajmer is currently involved in a Rs, 252 crore-project to create an elevated road to connect North and South Ajmer. Other than this beautification, cleanliness and sewage water treatment of Anna Sagar Lake is also a major objective for the city. An escape channel of Anna Sagar Lake, covering a stretch of 2 kms has also been earmarked for covering and transforming into an alternate road route.