“TESTING AND STANDARDISATION OF COLOURED GEMSTONES IS THE NEED OF THE HOUR AND JAIPUR CAN TAKE THE LEAD” – Amit Yadav, Director General, DGFT and Additional Secretary, Department of Commerce, Ministry of Commerce and Industry

HomePress Release“TESTING AND STANDARDISATION OF COLOURED GEMSTONES IS THE NEED OF THE HOUR AND JAIPUR CAN TAKE THE LEAD” – Amit Yadav, Director General, DGFT and Additional Secretary, Department of Commerce, Ministry of Commerce and Industry 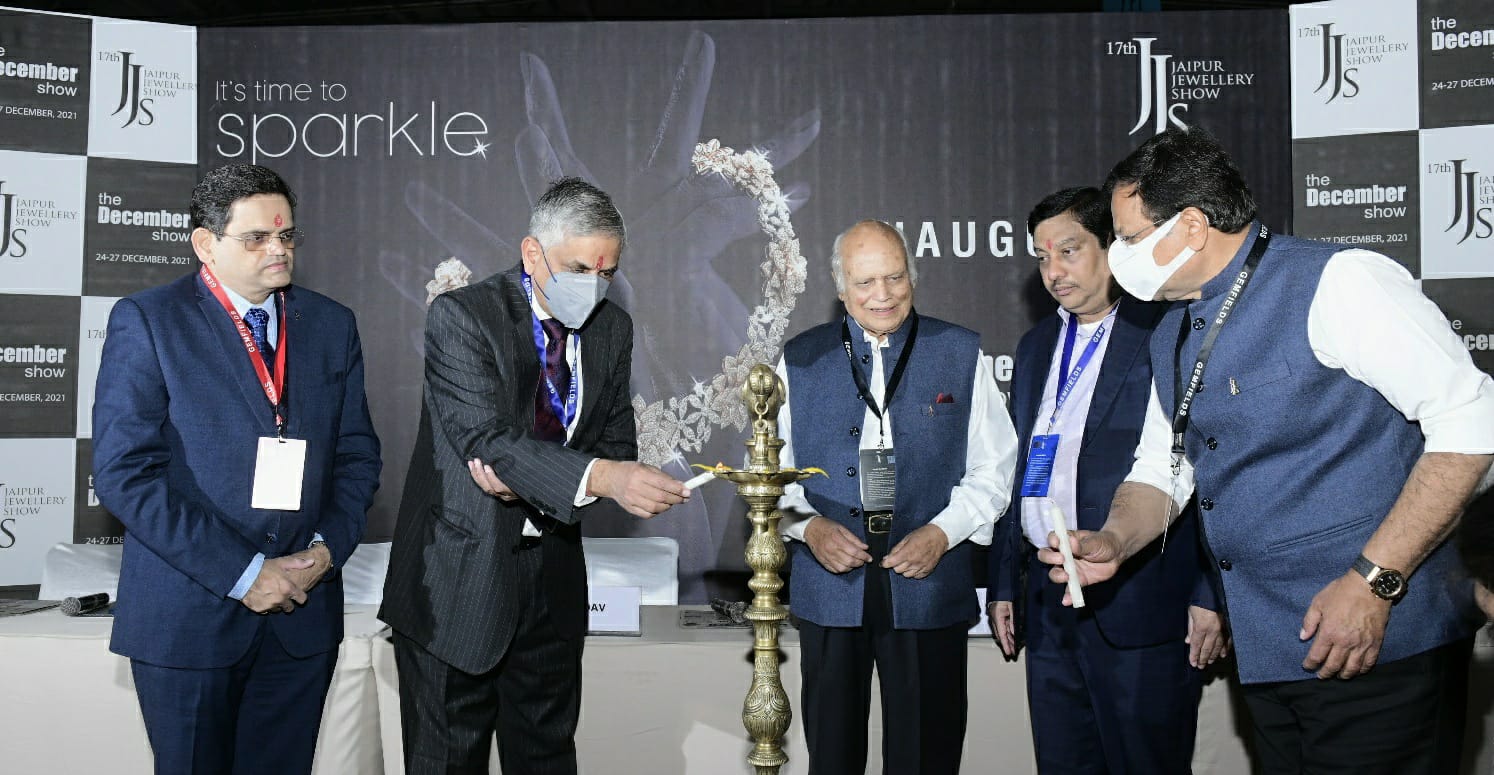 “TESTING AND STANDARDISATION OF COLOURED GEMSTONES IS THE NEED OF THE HOUR AND JAIPUR CAN TAKE THE LEAD” – Amit Yadav, Director General, DGFT and Additional Secretary, Department of Commerce, Ministry of Commerce and Industry

Trust lies at the foundation of the gems and jewellery business and further efforts must be made by the industry to garner and maintain unwavering trust amongst themselves and the consumer. Keeping in line with these time-honoured values of the trade, there is a vital need for standardization and testing of colored gemstones today. Jaipur, being the epicenter for gemstones in the country, is well equipped to take the lead in this endeavor. This was stated by Mr. Amit Yadav, Director General, Directorate of Foreign Trade (DGFT) and Additional Secretary, Department of Commerce, Ministry of Commerce and Industry. He was speaking as the Chief Guest at the Inaugural Ceremony of the 17th edition of Jaipur Jewellery Show (JJS) at the Jaipur Exhibition and Convention Center (JECC) in Jaipur, the theme of the JJS this year is – It’s time to Sparkle!

Mr. Yadav further said that the Gems & Jewellery (G&J) sector is a part of the growth story of the nation as it is one of the thrust areas of export and plays a major role in employment generation of close to 4 million people. In the global polished diamond market, India’s share is estimated to be 75% in terms of value, 85% in volume and 92% in terms of pieces. Globally, we are also the 4th largest exporters in gold jewellery, 1st in silver jewellery and 2nd in colored gemstones. The industry suffered a setback due to the pandemic but the G&J export target for the financial year 2021-22 is set at over 41 billion USD.

In his address, Mr. Ashish Pethe fondly reflected on the strong camaraderie shared between the GJC and the JJS committee and on their collective efforts on addressing the issues of hallmarking, excise and GST, among others. He said that Jaipur has always been the focal point for gems and jewellery trade and that every edition of JJS has been an enriching experience providing a bird’s-eye view of industry trends.

Mr. Nirmal Bardiya announced that Jaipur will be hosting the International Gems & Jewellery Show in May, 2022 which will be focused exclusively on inviting foreign traders, reviving foreign trade and once again streamlining the supply chain in the gems and jewellery industry after the obstacles caused by the pandemic.

Hony. Secretary, JJS Organizing Committee, Mr. Rajiv Jain said that the Jaipur Jewellery Show is a Not-for-Profit initiative that aims at giving an impetus and platform to the members of the Gems and Jewellery fraternity. He informed that a whopping 90% of the exhibitors repeat each year which is a testament to the significant exposure and business they get from exhibiting at JJS. 500 top retailers of the country are also visiting the show.

Mr. Jain further informed that a special area has also been created at the show for Jewellery and Gemstone Institutes as well as women entrepreneurs. As many as 7 women designers from across the country will also be felicitated on 26 December. To celebrate and promote designers, the Jaipur Jewellery Design Festival (JJDF) is also taking place for the third time this year.

The inaugural ceremony of the show was moderated by the spokesperson of JJS, Mr. Ajay Kala. The inaugural ceremony began with the traditional lighting of the lamp by the dignitaries and was followed by the release of the JJS Show Guide. A book on Kundan Meena titled ‘When Jewellery Speaks’, which has been published on the initiative of JJS in collaboration with National Institute of Design, Ahmedabad was also presented to the dignitaries.

On the first day, an unprecedented number of visitors attended the show and went around interacting with the booth owners. There is a feeling of euphoria among the participants on looking at the business queries and interest evinced by the visitors.