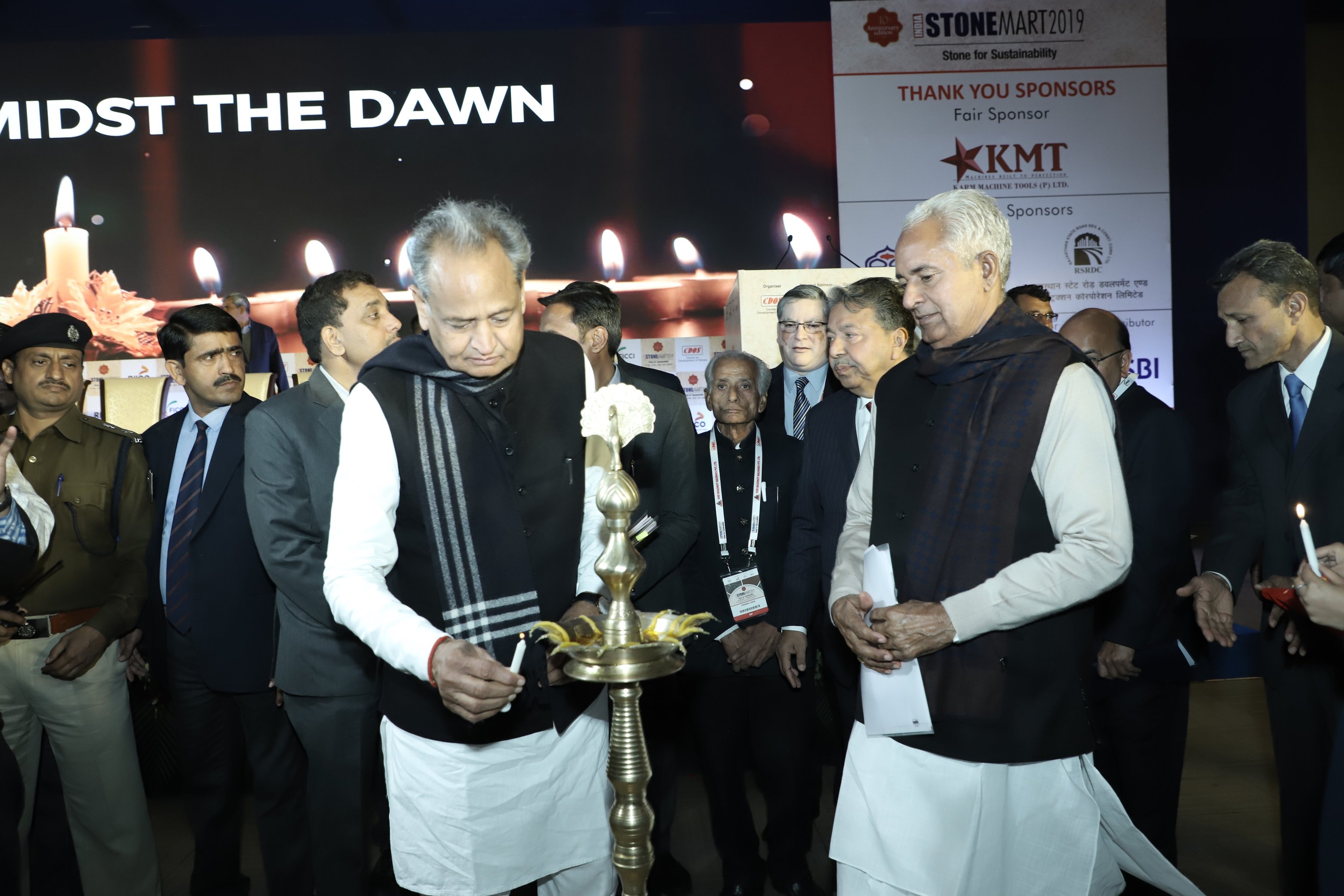 Livelihood and employment for the youth is a grave challenge being faced by the country. Currently, 3/4th of India’s population falls in the working age category. Over 10 lakh people are employed in the stone industry in the State. This was stated today by Chief Minister of Rajasthan, Mr. Ashok Gehlot at the inaugural session of the 10th edition of ‘India Stonemart’ at JECC in Jaipur.

The event is organised by Centre for Development of Stones (CDOS) with Federation of Indian Chambers of Commerce and Industry (FICCI) as co-organiser and is supported by the Government of Rajasthan and other reputed institutions. Rajasthan State Industrial Development & Investment Corporation Ltd. (RIICO) is the Principal Sponsor of the event.

Mr. Gehlot further said that around 20-30 years ago, there was huge wastage of stone in the mining process. However, over the years due to adoption of modern technology, the wastage has drastically reduced. This has helped combat the major environmental challenges caused by the stone industry. Stone exports have also increased due to value addition and architectural reinvention. The need of the hour is to further invest in research and development so that resources can be used efficiently to increase output and grow business.

The Chief Minister also said that no stone will be left unturned in promoting industry in the State. In his last tenure the Single Window Act had been passed and marble as well as granite policies were formulated. He said that the Government will be responsive to entrepreneurs and industrialists in facilitating them to set up projects in the State.

Industries Minister, Government of Rajasthan, Mr. Parsadi Lal Meena said that there is need for a new industrial policy. The policy will enable a boom in industrial sector by providing a conducive environment for setting up an industry. Employment opportunities for the local labour force as well as their health and security should be given priority. He further said that modern technology should be adopted to reduce occupational hazards of the workers.

Chief Secretary, Government of Rajasthan, Mr. D.B. Gupta said that India has moved up to the 5th position in the ranking of the most favoured nations for investment. The stone sector is an important area for investment. There is significant need to train the manpower of the stone sector with advanced technology in various stone clusters. Furthermore, use of IT application can aid in stone marketing, processing and branding.

Chairman of RIICO & CDOS, Mr. Kuldeep Ranka said that India Stonemart is the largest stone exposition in the country. This year the Mart is witnessing participation from 7 countries like Turkey, China, Italy, Brazil, Iran, Spain and Taiwan. Pan-India participation apart from Rajasthan is seen from 16 other States of the country.

In his welcome address, Vice Chairman, CDOS, Mr. Ashok Kumar Dhoot appealed to the Chief Minister that the current GST of 18% in the stone industry should be reduced. A separate Export Promotion Council for Stones should also be set up.

On the occasion, the Chief Minister also gave away ‘All India Stone Architectural Awards’ in different categories and released the Exhibitors’ Directory of the mart.

Chair, FICCI, Rajasthan State Council, Mr. Ashok Kajaria delivered the Vote of Thanks on the occasion