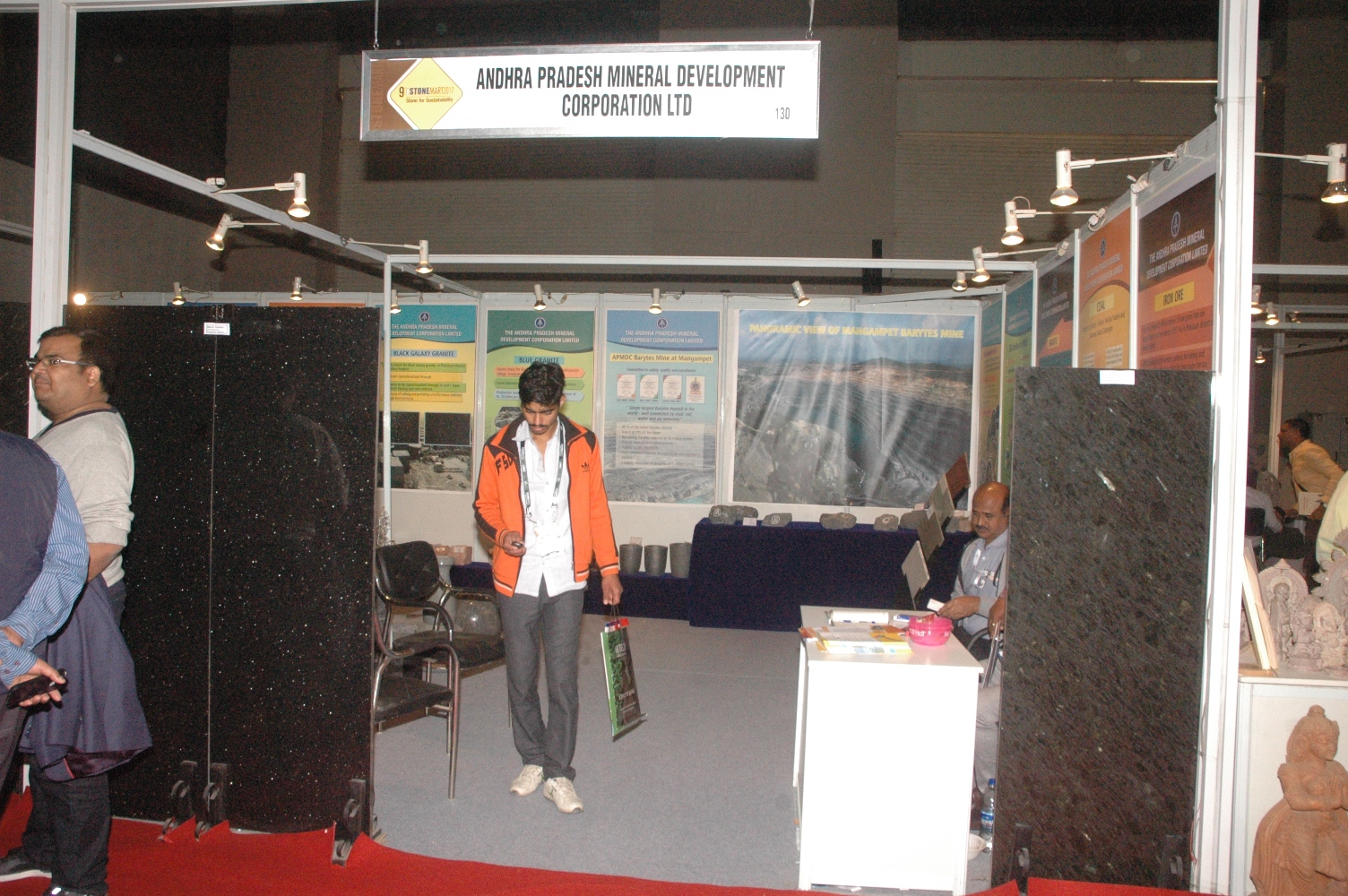 Stone and stone products from Odisha, Andhra Pradesh and Jharkhand

Jaipur, 4 February: As in the past years, the 9th edition of India Stonemart also has a number of states setting-up their pavilions at the mega event. Among them are Andhra Pradesh, Jharkhand, Gujarat and Odisha.

The state of Gujarat has set up a separate pavilion dedicated to its mineral and natural resources display. The state has been setting up its pavilion at the India Stonemart since 2009. On display were Lathe machinery used for drilling, shaping, sawing, planning, reaming, and grinding of stones and marbles. The state is also well-known for black granite and marble mining. The state has been receiving queries for granite mining from various parts of India such as Jaipur, Bangalore, Chattisgarh, Kerela, Maharashtra and foreign countries like Iraq, UAE and China.

The state of Odisha is known for its intricate stone carvings. With a few simple tools like hammers and chisels of various shapes and sizes, the crafts persons of the state are known to work with remarkable ease in both hard Granite, Khandelite stone as well as in softer varieties like Kendumundi stone. Apart from decorative and votive articles, artisans now also make modern utilitarian items, home decors, garden décor as well as kitchenware. On display, here are beautiful stone statues like those of Krishna, Ganesh, Buddha as well as decorative items with a traditional touch made out of sandstone. While the sandstone is known as Sahana Pathar in local language, the soft stones are called Khadi Pathar. Art works made out of the pink and white soft stone varieties are also on show here. Statues and deities made out of granite (the hardest variety of stone available here) are also on display.

Facts like the advantages Jharkhand has in terms of infrastructure and that it ranks top amongst states in ‘Ease of Doing Business’ are also highlighted at the pavilion.

It is to be recalled that the event is organised by Centre for Development of Stones (CDOS) with Federation of Indian Chambers of Commerce and Industry (FICCI) as co-organiser and is supported by the Government of Rajasthan and other reputed institutions. Rajasthan State Industrial Development & Investment Corporation Ltd. (RIICO) is the Principal Sponsor of the event.

VIEWERS LEARN THE BEAUTIFUL ARTFORM OF ARABIC, PERSIAN AND URDU CALLIGRAPHY ON THE JKK FACEBOOK PAGE

Press Release On the second day of online learning classes ‘Beejakshara’, a session on ‘The Art of Calligraphy’ (Arabic, Persian and Urdu’ was presented on the JKK Facebook page. The hour-long class was conducted by calligraphy artist, Mr. Khurshid Alam. The programme was organized by the Department of Art...

Press Release On the occasion of ‘International Literacy Day’, Jawahar Kala Kendra (JKK) began its online learning classes ‘Beejakshara’. On the first day of the programme, viewers learned the intricate ‘Art of Calligraphy’ in English and Hindi script by calligraphy artist, Mr. Harishankar Balothia. The session introduced how to...