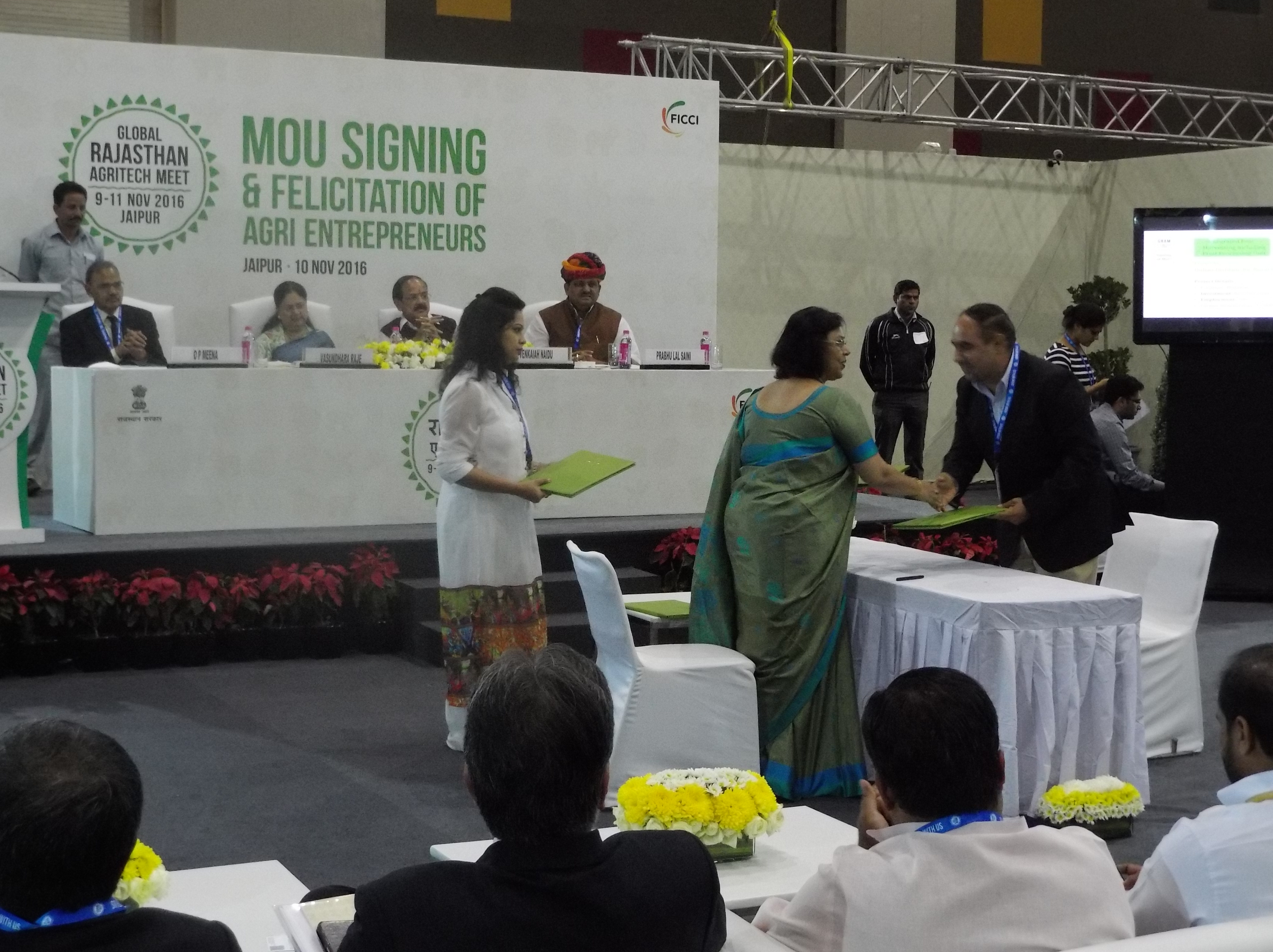 Jaipur, 10 November2016: Union Minister for Urban Development Housing, Urban Poverty Alleviation, & Parliamentary Affairs, Mr. Venkaiah Naidu on the occasion of Memorandum of Understanding signing ceremony on the second day of ‘Global Rajasthan Agritech Meet 2016’ said that he will try his best to come up with a concept of Smart Villages like Smart Cities for the overall development of the country.

In the presence of Mr. Naidu, Chief Minister of Rajasthan, Ms. Vasundhara Raje and Rajasthan Agriculture Minister, Mr. Prabhu Lal Saini – 38 MoUs with a total value of Rs4400.89 crore were signed during  ‘GRAM 2016’ at Jaipur.

The MoUs were signed in various sections of agriculture and allied sectors like animal husbandry, fisheries and agro tourism.

Speaking on the occasion Mr. Venkaiah Naidu said that every state needs to focus on the growth of farmers and agriculture apart from industries also.Only then the country will grow in real sense.

Mr Naidu emphasized on the fact that the agriculture sector has not received the importance it should have.  He commended that Ms. Raje’s initiative of organizingGRAM and her focus on agriculture is appreciable and should be encouraged. As a sector, agriculture is important and increasingly more younger generations should opt for farming. He also congratulated the award winners and said that they should inspire others to take initiatives in agriculture and allied sectors.

Chief Minister speaking on the occasion called GRAM a momentous occasion for the government and the farming community. She emphasized that the objective for organizing GRAM is to reduce the gap between cities and villages. She hoped that the urban-rural gap will further reduce with the concerted efforts the State is making. Very soon one will see farmer-entrepreneurs. She stated that within one year the projects for which MoUs have been signed will come on the ground.

Mr. Saini in his welcome address said that these MoUs will help in taking the economy of Rajasthan ahead. The state has huge potential in areas like modernizing mandis, cold chains, olive oils, custom hiring etc. among others.

Other dignitaries present on the occasion were Minister of state for I&B Mr.Rajyavardhan Singh Rathore, Minister of State for Consumer Affairs, Food and Public Distribution, Mr. C.R. Chaudhary, and other senior ministers and MLAs.

The three-day global meet is being organised by the Government of Rajasthan in association with the Federation of Indian Chambers of Commerce and Industry at Sitapura-based Jaipur Exhibition and Convention Center in Jaipur.