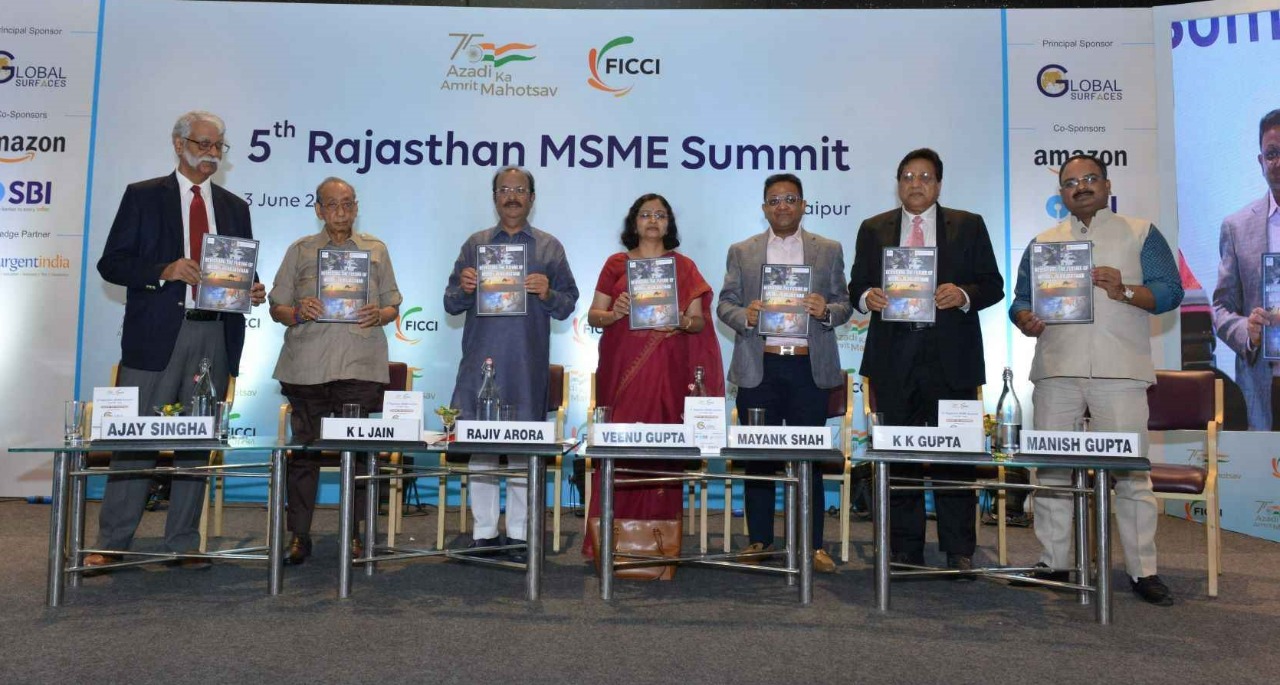 Rajasthan is on the verge of unprecedented growth. And its growth story will be predominantly defined by the MSME sector. 90 percent of the industries in the State come under the MSME sector and such units generate huge employment and give a fillip to the GDP. This was stated by the Chairman, Rajasthan Small Industries Corporation, Mr Rajiv Arora. He was speaking at the 5th Rajasthan MSME Summit organized by FICCI Rajasthan State Council in Jaipur. The focus of the event was on ‘Reimagining the MSME Growth Story in Rajasthan’.

Mr. Arora further said that there was a very positive response to the Invest Rajasthan Summit being held in the State in October. MoUs and LoIs to the tune of INR 10 lakh crore have been signed for investment in the state. A new ICD is slated to come up in Bikaner and a Cargo Complex in Udaipur.

Throwing light on the steps undertaken by the State Government to boost growth of MSMEs, Additional Chief Secretary (ACS), Industries, Government of Rajasthan, Ms. Veenu Gupta said that RIICO is now  earmarking plots specifically for MSMEs in its industrial areas.

The ACS Industries also highlighted that Rajasthan is the first state to allow MSMEs to start projects without any approvals or clearances for first three years. This duration is now being increased to a period of 5 years.

Ms. Gupta further said that many more MSME Facilitation Councils have been set up to facilitate payments. To curb the problem of financing for MSME, an attractive scheme ‘Mukhyamantri Laghu Udhyog Protsahan Yojna’ has also been introduced. A comprehensive MSME Policy is also being framed and will be released in a month.

In his address, Member, FICCI Rajasthan State Council and Hony Secretary General, RCCI, Dr KL Jain summed up the challenges being faced by the MSME sector such as delay in payments from PSUs, financing formalities from banks, high interest rates, among others. He also provided suggestions on how the process can be made smoother for the MSMEs.

Director Resurgent India Limited, Mr. KK Gupta said that in addition to financial challenges, the industry stakeholders and the government should also focus on other aspects like technical, marketing, sourcing of raw material etc.

Earlier in his welcome address, Chairman, FICCI Rajasthan Sub Committee on Manufacturing & Exports and Managing Director, Global Surfaces Ltd., Mr. Mayank Shah outlined that how MSMEs not only play a crucial role in providing large employment opportunities but also help in the industrialization of rural and backward areas.

A knowledge paper on ‘Revisiting the Future of MSMEs in Rajasthan’ prepared by Resurgent India Ltd. was also released on the occasion.

The session was moderated by Advisor FICCI Rajasthan State Council, Mr. Ajay Singha and the Vote of Thanks on the occasion was extended by Chairman, FICCI, Rajasthan Sub Committee on Infrastructure & Chairman, Insolation Energy Pvt. Ltd., Mr. Manish Gupta.