‘NIRANT…’ BEGINS WITH FOLK AND CLASSICAL PERFORMANCES AT JKK

HomePress Release‘NIRANT…’ BEGINS WITH FOLK AND CLASSICAL PERFORMANCES AT JKK 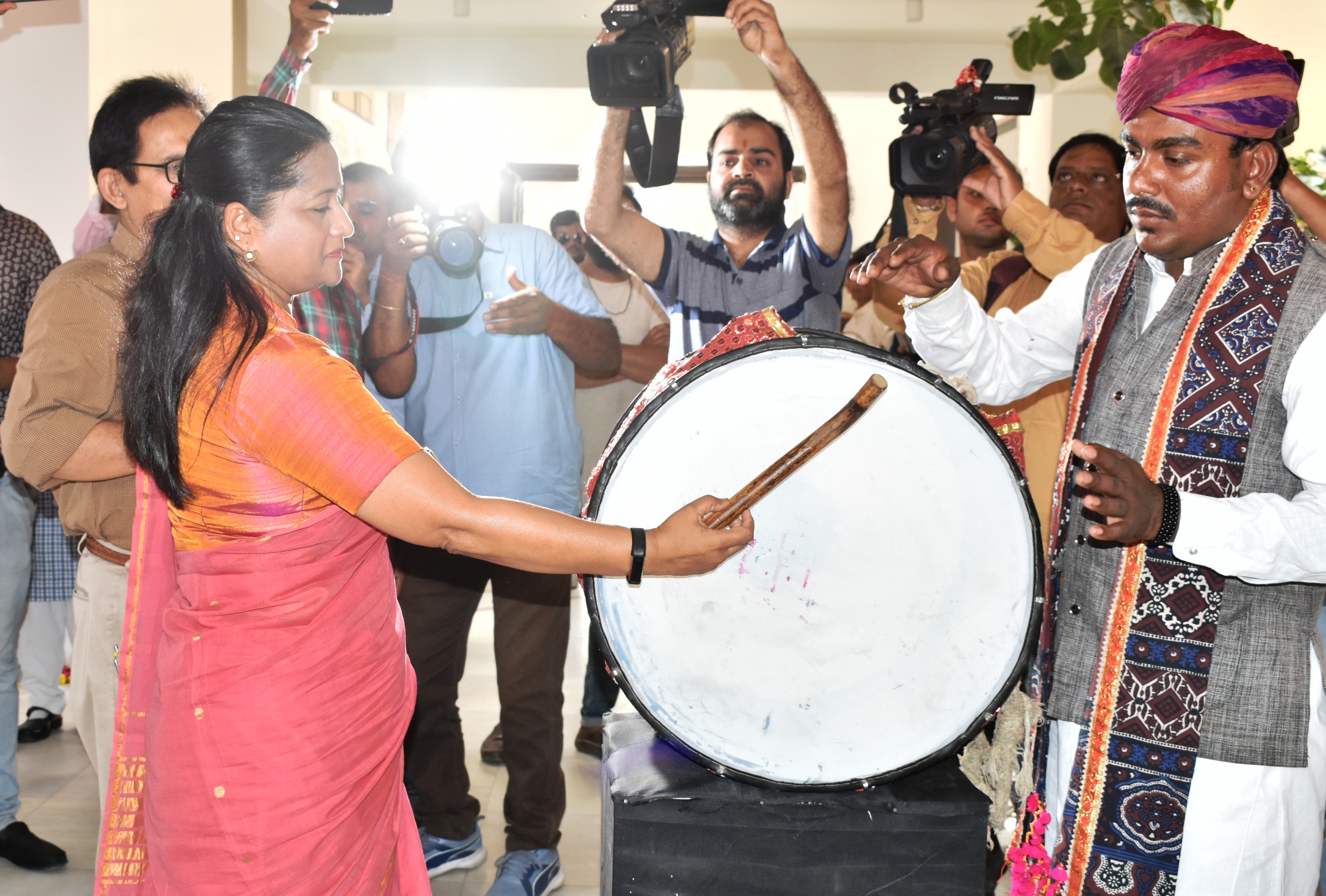 ‘NIRANT…’ BEGINS WITH FOLK AND CLASSICAL PERFORMANCES AT JKK

A 2-day programme on the occasion of the 26th Jawahar Kala Kendra (JKK) Foundation Day – ‘Nirant…’ was inaugurated by Principal Secretary to the Government of Rajasthan, Tourism, Art, Culture and Literature, Ms. Sreya Guha. She opened the festival with the beating of the traditional drum and writing a welcome message on the ‘Doodle Wall’. Later, she also started the children film screening ‘Lilki’ by switching on the remote control.  She also visited the ‘Portrait and Live Drawing’ workshop at the Graphic Studio.

As many as 150 students from different schools of Jaipur participated in the screening of a famous children’s cinema — ‘Lilki’. The movie follows the story of a 10-year old girl ‘Lilki’ who is a domestic help from Nainital. She was brought up in Mumbai by a young architect. ‘Lilki’ encounters a gang of four girls who are spoilt rich brats. They befriend her and try to help her raise money to return to Nainital. However, Lilki’s sense of self-respect causes her to refuse the money. The girls then invite her for a trip to thesea shore during school hours. While Lilki informs her employer about the trip the other girls do not inform their parents. The parents are worried about their children who have not returned from school. All four girls are scolded for their trip. Lilki’sgenerous employer gets her admitted to their school.

A ‘Portrait and Live Drawing’ workshop was conducted by Mr. Durgesh Atal. During the 3-hour-long workshop, 25 students learned how to draw realistic portraits using only pencil and paper.

Colourful folk dances of Rajasthan such as ‘Deru Nritya’, ‘Kalbelia’, and ‘Saharia’ were performed to the striking music of the ‘Manganiyars’. Other than this, ‘Sidi Goma’ – the dance of the people of Gujarat of African descent was also a highlight of the show.

For the wildlife enthusiasts of Jaipur, a film based on the Great Indian Bustard –‘In Search of Godawan’ directed by Mr. V. P. Dhar was also screened. The 52-minute documentary film is the first film based on the State bird. The aim of the film was to generate awareness among the common people to come together and promote breeding of this type of bird which is decreasing fast.

The evening witnessed several cultural performances. The programme began with a Dhrupad rendition by Dr. Shyam Sundar Sharma and Dr. Om Prakash Nair. They opened the performance with Raag Yaman which was followed by the presentation of the composition ‘Jai Jai Jai Janani Devi’.

Also on the occasion, Pt. Rajkumar Jawda of Jaipur Gharana presented Kathak Trio performance with Chetan Kumar Jawda and Bhavdeep Jawda. This was a unique opportunity for Jaipurites to witness the famous dance family on one platform. They were accompanied by Mr. Ramesh Mewal (Harmonium), Muzaffar Rehman (Tabla), Amiruddin Khan (Sarangi) and Ashish Gangani (Pakhawaj).

Throughout the day Kathputli and Behrupiya artistes displayed their talent across the JKK premises with colourful performances to the delight the visitors at the festival. The Doodle Wall activity was held throughout the day and was a treat for the children tolet their creativity flow onto the wall with their drawings and paintings.