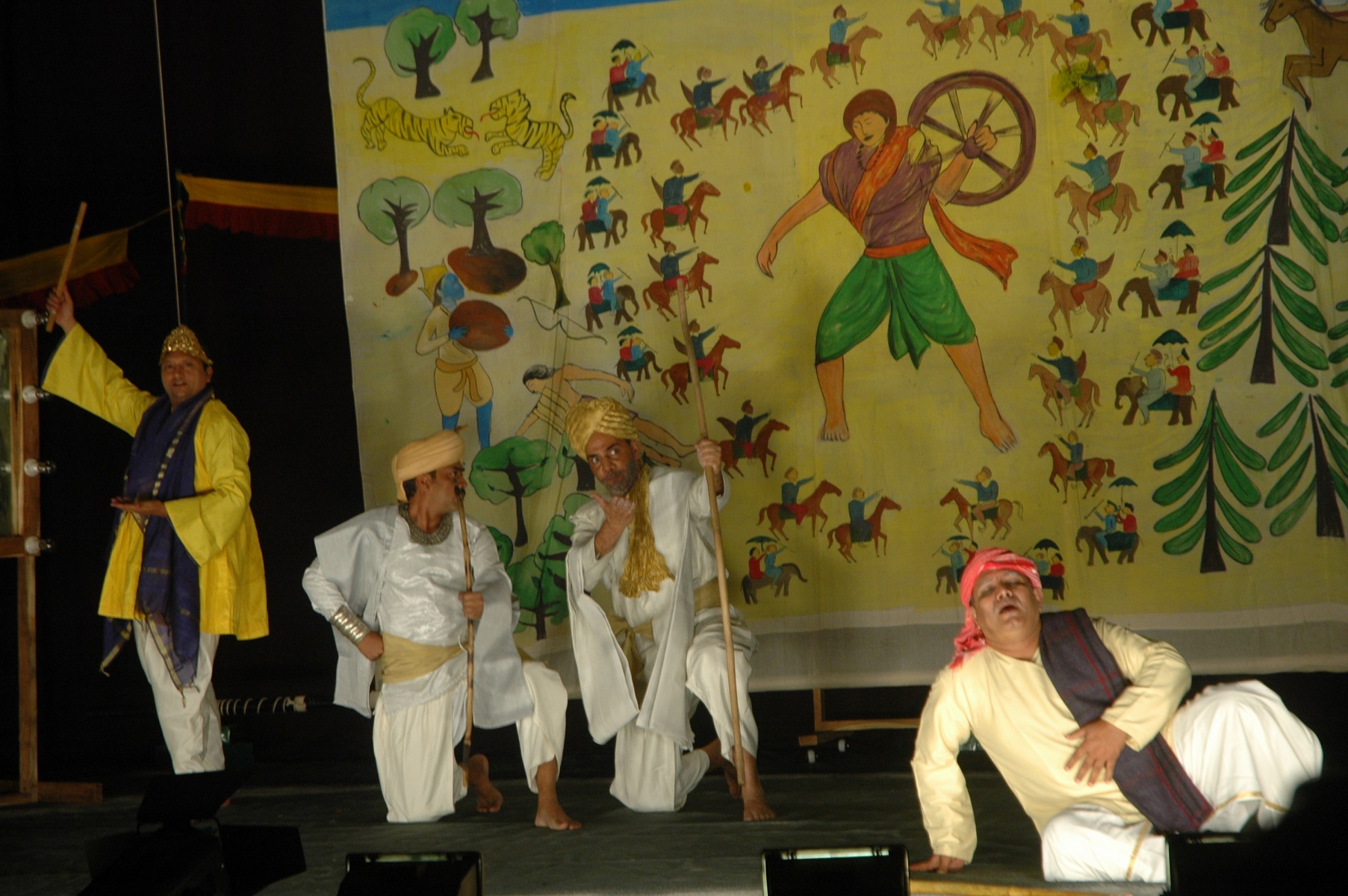 Jaipur, 21 March: As a part of the ongoing Performing Arts Festival – ‘Navras’ , a play directed by Abhishek Majumdar and featuring the popular actor Kumud Mishra was staged today.The play Kaumudi blends the splendour and the travails of theatre (the Rangmanch) with India’s glorious epic story – the Mahabharata. Like the epic, the play, written and directed by Abhishek Majumdar, is multilayered yet seamless. The production with its parallel and complementary themes comes together as a unique whole.

At its core, the play tells the story of an aged artist, Satyasheel (Kumud Mishra), who has earned much fame and popularity in his depiction of the character Eklavya from the Mahabharata. But the slow and steady decline of his eyesight is forcing him to give up his art. He is tragically becoming blind. In his last three-day show prior to his inescapable retirement, he is forced to collaborate with the young and upcoming actor Paritosh (Sandeep Shikhar), who is famous for playing the role of Abhimanyu in other theatres. Paritosh has arrived at the old theatre in Allahabad at which Satyasheel has been the star actor and to replace him as Eklavya after Satyasheel’s last show. Till then Paritosh will continue to play Abhimanyu.

As they prepare for their respective roles, there is much hostility between the two actors, but it slowly becomes evident that they aren’t strangers to each other. It is revealed, that Satyasheel and Paritosh are in fact father and son, estranged in their past due to an unfortunate incident. Years ago, a playful evening at the sea took a turn for the worse and the father had been compelled to choose between his drowning son and wife. This marked event entrenched in Satyasheel’s consciousness and tortured by Paritosh’s presence becomes a source of dramatic conflict juxtaposed with the unravelling of Eklavya’s character and its philosophical underpinnings.

The play smoothly transitions between the ‘reality’ off stage and the ‘reality’ on stage. As the play moves along, the parallels between the actors’ lives and the lives of the characters they portray become more and more pronounced. The on stage drama raises philosophical questions. Whose life is more valuable, an older or a younger person’s? Is personal ethic more important than public ethic? Does art have a function, and do we make art or does art make us? It also holds up a mirror to theatre, asking: does theatre have a meaning or is it our ego being massaged? Whose theatre is it— that of the audience or of the practitioner?

Meet The Artist’ session was held with Sufi singer and actor Zila Khan and writer and social activist, Dr. Mridula Singh. The duo discussed about Zila’s overall music journey of becoming one of the most renowned Sufi singers of the country.  During the talk, Zila Khan said that she has inherited the knowledge of Sufi and Classical music from her ancestors. Talking about her family, she said: “Our culture is the only ‘jagir’ that we have bequeathed from our ancestors. The past 7 generations of my family have been associated with classical music. My father has been the biggest source of motivation throughout my journey of becoming an acclaimed singer.”

The noted singer further said that she keeps on learning and researching new things to add to her music. She is also actively involved in  preserving the history and culture of her family. Zila Khan can sing in various styles like Indian classical, world music, traditional ghazal as well as Sufi music. During the session, the versatile singer also threw light on her initiatives relating to teaching music to both privileged and underprivileged students who are keen to learn music from all over the world. In fact, she has also curated the Ranthambore Festival which works towards conserving traditional music.

Tomorrow in ‘Meet the Artist’ there will be an interaction with director of the play Kamaudi, Abhishek Majumdar. This will be followed by reading of Vijayadan Detha’s “Kenchuli” and “Mooji Sharma”at 4 pm at Krishnayan and Ganapati by Adishakti at 7 pm at Madhyavarti.