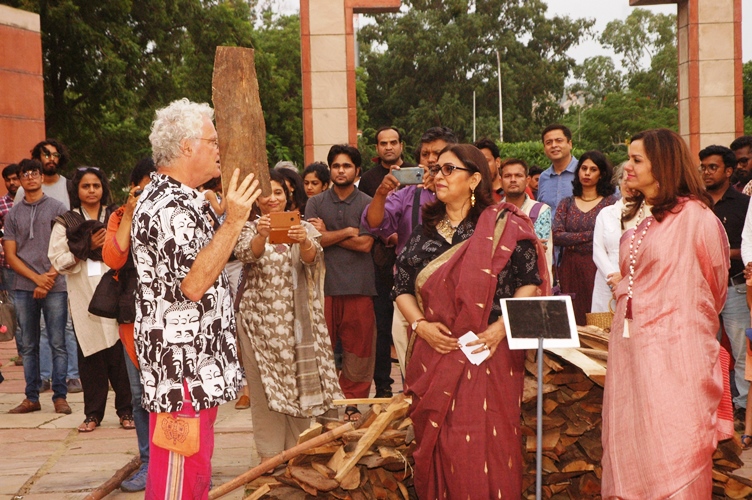 The first Indian Ceramics Triennale ‘Breaking Ground’ was inaugurated at Jawahar Kala Kendra (JKK) on Friday. The event is being organized in collaboration with the Contemporary Clay Foundation.

On the occasion, Guest of Honour, Chairperson, JSW Foundation, Ms. Sangita Jindal said that the Triennale is a wonderful opportunity to see the works of ceramists around the world who do not get their due in India. These artists have worked strenuously to bring about this huge project. With projects such as these, one can only hope that JKK will become an international hub.

Director General, JKK, Ms. Pooja Sood during the welcome address said that the Triennale is the product of tireless hard work by the JKK team to present experiential and experimental artwork by Indian and international artists. Other than this, the Triennale will also feature a 2-day symposium, film screenings along with workshops for adults and children.

The event also witnessed ground-breaking performances by Esther Beck of Israel and parallel acts by Jury Kim of South Korea and Vishnu Kolleri of India. Esther presented ‘Separated by Time’. The performance was a physical act wherein the artist worked with material like to cut, hammer and clay.

This was followed by Jury Kim who used a sculpture of a ceramic building and poured water to slowly disintegrate the structure to a certain level.  Artist, Vishu Kolleri used a clay tower ‘Resonance Tower Phase I’ which was placed in ‘Sphatik’. The act involved the art piece that compiles the artist exploration of resonance ceramic voids. Music was created using art piece which combined with the music playing in the background.

Is it to be noted that the ‘Indian Ceramics Triennale’ will be open for public viewing till 18 November.