“IMMENSE OPPORTUNITIES FOR PLASTICULTURE IN THE AGRI SECTOR”-Principal Secretary, Agriculture, Government of Rajasthan 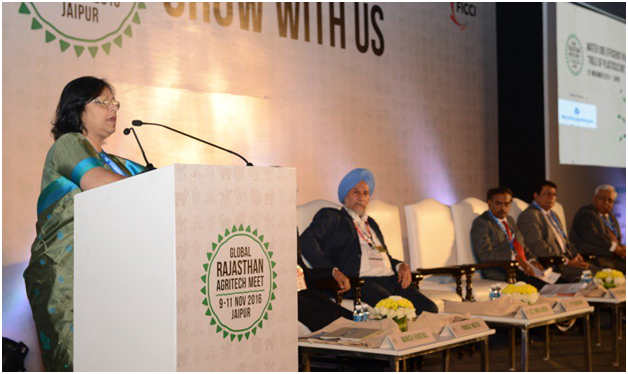 “IMMENSE OPPORTUNITIES FOR PLASTICULTURE IN THE AGRI SECTOR”-Principal Secretary, Agriculture, Government of Rajasthan

Jaipur, 10 November: The Principal Secretary, Agriculture, Government of Rajasthan, Ms. Neelkamal Darbari stated that the Agriculture Sector has immense opportunities for ‘Plasticulture’ in terms of efficient usage of water. If reused and recycled properly, plastic can play a pivotal role in water handling, storage, conservation as well as transportation. Ms. Darbari was speaking at a Conference on Water Use Efficiency inAgriculture — “Role of Plasticulture” on the second day of the 3 day Global Rajasthan Agritech Meet 2016 (GRAM 2016) being held in Jaipur. The session was chaired by Deputy Director  General – Crop Science, ICAR, Dr. Jeet Singh Sandhu. Minister of State, Law and Justice, Electronics and IT, Government of India, Mr. PP Chaudhary co-chaired the session. The event is being jointly organized by the Government of Rajasthan and the Federation of Indian Chambers of Commerce and Industry (FICCI).

In his address, Mr. PP Chaudhary said that it is important to regulate the usage of water in agriculture by cost effective methods. And to achieve this it is significantthat the departmental officers should make sure that all the government schemes and grants should reach to the the farmers directly and they are aware about it, he added.

She further said that in order to achieve the mission of doubling farmers’ income by 2022, it is imperative that low cost and high quality plastic should be made available to the farmers. Being a scarce and valuable resource, water should be used judiciously and plasticulture will go a long way in limiting its use. New technology and processes should also be made available to the farmers so that the productivity and product quality can be increased with limited usage of water, the Principal Secretary added. She concluded her special address with the slogan — “Per Drop More Crop”.

Sr. Practise Head, Tata Strategic Management Group, Mr. Manish Panchal gave a presentation on the ‘Role of Plasticulture in Next Generation Agriculture’. He said that there are varied applications of plastic across multiple industries but the penetration is low in agriculture sector. With rising population, increasing food requirement and decrease in the per capita arable land, there is a dire need for increased productivity. Thetechnological challenges faced by the country due to water stress can be addressed by plasticulture. It will lead to efficient management of resources as well as reduction in the use of water and fertilizers, Mr. Panchal added.

Vice President (Industry Affairs), Reliance Industries Limited, Mr Pankaj Mehta, during the session highlighted the importance of adopting various plasticulture methods and how it will play a critical role inorder to bring prosperity to the Indian agriculture sector. He urged the farmers to adopt micro irrigation technologies for improving water use efficiency which will further increase the productivity of the crops.

In his address, Emeritus Scientist, Water Technology Centre, Indian Agriculture and Research Institute, Dr. TBS Rajput said also emphasized on the importance of water for efficient use in agriculture by growing ‘more crop per drop’. He said that the water-table and quality is decreasing gradually and steps have to be taken to save water through effective usage of micro irrigation. He stressed that productivity, production and farmers income need to be increased for the growth of the agriculture sector of the country.

Highlighting the role of the Irrigation Association of India, Director, Irrigation Association of India (IAI), Mr. Arijit Sengupta said that the association is working closely with Prime Minister Modi’s aim of providing ‘har khet ko paani’. “Micro irrigation should be made mandatory for water guzzling crops like Sugarcane and cotton. Micro irrigation is the usage of plasticulture –the industry leaders, manufactures and government should work more closely to spread the awareness about plasticulture and make it easily available at a low cost to the farmers ” said Mr. Sengupta.

Director General, Central Institute of Plastics Engineering and Technology (CIPET), Dr. S.K. Nayak threw light on how CIPET is playing a vital role in skilling manpower, plastic processing as well as quality control. CIPET is one of a kind institute in India where facilities like design, tooling, processing and testing are available under one roof.